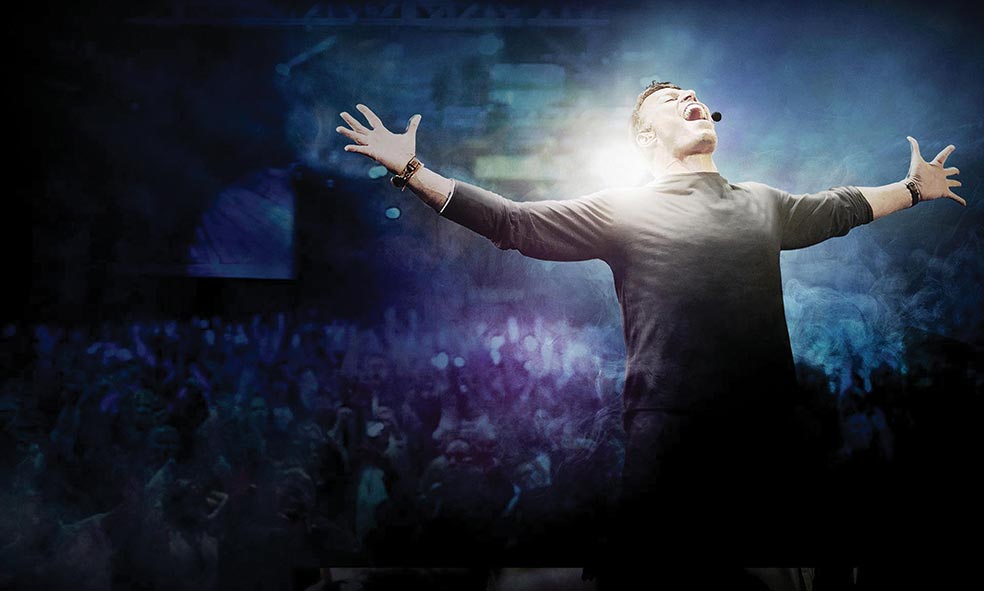 Anthony Robbins is clear about his mission – to stop suffering. “It’s my obsession,” he says. “It’s an obsession to break through. It’s an obsession to help. I’m addicted to it. It makes me feel like my life has a deep meaning, not just surface meaning. Everybody’s got their thing, this is my thing.”

Robbins is a charismatic and engaging speaker, and his passion for helping others is visibly genuine. But why does he do it?

“Suffering in my own life…,” he answers. “Because I know what it feels like and I don’t want anyone to feel that way.”

Born Anthony Mahavoric in 1960 in Azusa, California, his childhood was spent supporting his unstable mother, who was addicted to alcohol and prescription medication. She couldn’t leave the house, sending the young Robbins to the pharmacist to get more valium because she had ‘lost’ her bottle. “She developed a dependency upon me,” Robbins says.

When he was 17, she dramatically tried to stop him from leaving her to go to college. Robbins says;“[My mom] is only five foot one, but she came down and grabbed my hair and smashed me against the wall, or she told me I was lying about something and put liquid soap down my throat so I threw up. She did some crazy shit.”

The day she attacked Robbins with a knife, he left home. But his take on the situation now is extraordinary. “I don’t want to malign her because I wouldn’t be me without my mom.”

Indeed, it’s this ability to positively reframe events on which much of Robbins’ life and work is built. He explains that “[My upbringing] made me a practical psychologist. I had to figure out how to keep my mom stable, how to make sure my brother and sister weren’t affected by it, find out how to please her… It produced in me drive, because I had to find a way that meant I wasn’t going to have a life like that for my family.”

Robbins embarked on a process of ‘sculpting himself’. He started with simple affirmations and later learned Neuro-Linguistic Programming from its co-creator John Grinder. He made this psychological work his own, and through it changed himself, and later, others.

Robbins thanks others for helping him find who he was. An early moment of what he calls ‘grace’ – divine intervention – while still at school changed everything.

Mr Cobb, one of his school teachers, recognised Robbins’ skill for moving people with words while he was trying to impress a girl. Cobb told him he’d never seen anyone show such an ability to stand up and speak without notes and mesmerise kids who normally didn’t want to listen.

Cobb handed him a speech called The Will to Win and made him agree to enter a public speaking competition. Robbins found the text deeply moving and went on to win the competition. It was the first of many competition wins, as Robbins discovered his talent to move people through communication.

Today, Robbins is one of the world’s most successful self-help gurus and a powerhouse of personal change. He has companies worth $6 billion in annual sales, speaks in front of over 200, 000 people annually, has a string of successful books and DVDs, and runs numerous philanthropic ventures. Over three decades, more than four million people have attended his life-changing seminars.

In 2016, Robbins released the movie I Am Not Your Guru, which follows him over six, gruelling, 12 hour work days, as he puts his whole being into helping people.

“In the room, every interaction I’m doing, I’m not just working with that individual – I’m a million percent with that individual – but there’s another part of my consciousness that’s saying you know how do I relate this in some way, so everybody gets value at some level? – and I’ve got to do that while I’m talking to someone I don’t know,” says Robbins.

‘The suffering’ in the room isn’t just Western lifestyle-generated neurosis; one harrowing sequence in I Am Not Your Guru shows a suicidal woman reveal that she has been systematically sexually abused from age six onwards. The empathy and compassion on Robbins’ face leaves the viewer wondering what he can say to help. Within minutes he turns her emotions around, showing her a future in which she has worth, and where it is possible to be loved. The camera catches up with Robbins later, tears streaming down his face.

Robbins doesn’t claim his path is the only one to end suffering, but it proves successful for many. At its heart, it’s a simple message, but delivered with deep instinct and powerful skill.