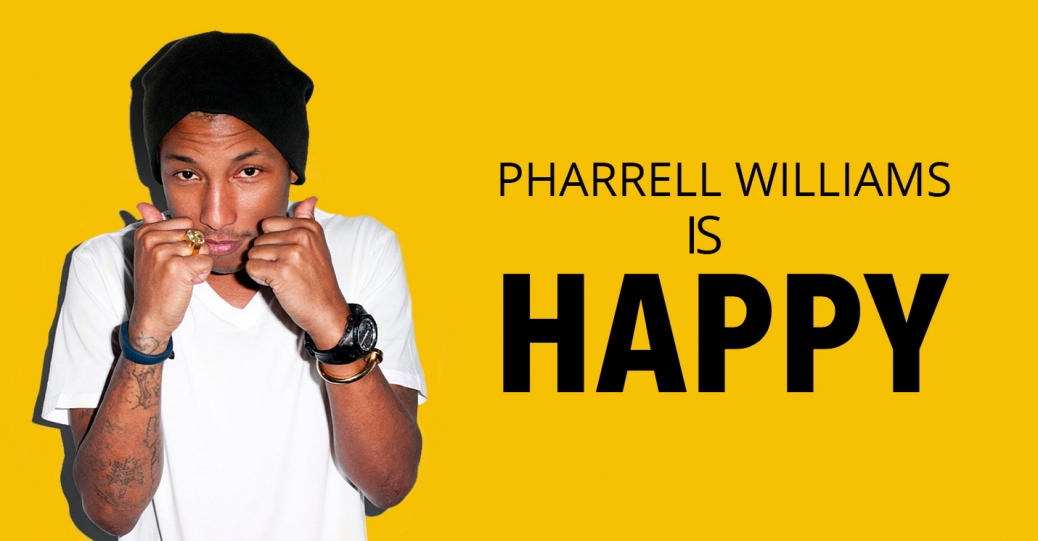 Pharrell Williams has gone from being the man behind a thousand hit songs to being a globally recognised frontman for feel-good summer sounds and inspirational initiatives.

There is a longstanding Internet joke that Pharrell Williams is a vampire. How else can his agelessness be explained? Well, maybe it’s happiness.

His baby face belies his 41 years. He has been a fixture of pop music, both before and behind the scenes, for years. He has achieved ubiquity through performing on mega-hits such as Daft Punk’s ‘Get Lucky’, Robin Thicke’s ‘Blurred Lines’, and his own summer hit, ‘Happy’. He is also a gifted polymath, overachieving as a fashion, jewellery, and furniture designer alongside his musical career.

“I can’t get stuck doing only one thing”, he says. “I have to work with different people doing different things. It’s where my energy comes from. I am inspired by life in general: conversations, movies, reactions to things, everything.”

Pharrell Williams was born in 1973 in Virginia,the oldest of three sons of Carolyn, a teacher, and Pharaoh Williams, a handyman.

“I had a mum and dad who urged me to pursue music but at the same time were realistic about it. It just sort of happened, to be honest. I can’t come up with a special inspirational story. It’s mostly my parents who didn’t shoot me down when I wanted to do it. Nor did they put too much pressure on me.”

His interest in music was sparked when he met future collaborator Chad Hugo in a band camp. This is where they discovered their musical chemistry, with Williams playing the keyboards and drums and Hugo playing tenor saxophone. They went on to play together in marching bands and school house bands, effectively laying the foundations for future musical success.

“Our ambitions were the same as any other kids that were studying music and being classically trained”, he says. “We did it because we loved it, and, you know, there’s a genuine curiosity to want to know more and see how things work. Some of us get this amazing feeling when we hear music and we feel music, and we want to figure out how to continue to feel that.”

In the 1990s, Hugo and Williams formed a four-piece “R&B type” group, The Neptunes, with friends Shay Haley and Mike Etheridge. They later entered a high school talent show where they were discovered by Teddy Riley, whose studio was next to Princess Anne High School. After graduating from high school, the group signed with Riley and kick started their recording career.

In 1994, Hugo and Williams had established themselves as a production duo under their old name, The Neptunes. They quickly became some of the most famous music producers in the world, going on to provide the backbone for hits from some of the biggest artists of all time, including Britney Spears, Jay Z, Snoop Dogg, Madonna, The Hives, Gwen Stefani, Maroon 5, Shakira, Jennifer Lopez, Mika, and many others.

Last year, in addition to his Neptunes work, Williams began to write and produce on his own. Since then, he has, among other things, produced tracks for blockbuster albums by Miley Cyrus and Jay-Z, cranked out the soundtrack for a hit movie (which included the juggernaut hit ‘Happy’). At one point in June, Williams had the rare distinction of occupying both the No. 1 and No. 2 slots on Billboard‘s Hot 100 at the same time with Robin Thicke’s ‘Blurred Lines’, which he produced and co-wrote, and Daft Punk’s ‘Get Lucky’, which he co-wrote. Being partly responsible for three of the biggest songs in recent history has made his sound utterly ubiquitous.

“You never know when a song is going to be huge”, he says. “The people make that decision. The only thing you can do is be loyal to your creativity and try to do something new and fresh, and leave it at that. What makes a song huge is people buying records, streaming it online, voting for it, and those are things that are out of my control. Those are the factors that make a song a hit; it’s never been me. The people decide. What I do is such a small part.”

While his rapping and record-making credentials are not in any doubt, he doesn’t often display the same level of empty braggadocio as some of his peers, focussing instead on sharing his success. Achieving that level of peace and satisfaction took a lot of time and hard work.

“I felt like I had amassed this big body of work, most of which was just about self-aggrandizement, and I wasn’t proud of it”, he says. “So I couldn’t be proud of the money that I had; I couldn’t be proud of all the stuff that I had. I was thankful, but what did it mean? What did I do? I didn’t want to throw my success into some kid’s face. Instead of saying, ‘Look at all the fish I have, and look how much we’re going to eat’, it should’ve been—at least a part of it—teaching them how to fish.”

As part of his bid to “teach kids to fish”, he runs a charity called From One Hand To Another, a foundation that assists at risk youth between the ages of 7 and 20 in communities throughout the country.

“The simplest way to say it is that I think we’re all dealt these cards in life, but the cards in and of themselves don’t read one way or the other. It’s up to you to home in on and cultivate whatever you’ve got in your hand. Most of the time, I see what I see, I search my feelings, and then I make my decisions based on my gut – and I don’t always make the right ones.”

From One Hand To Another forms part of i am OTHER, his media and philanthropic company. Included at the moment are fashion labels Billionaire Boys Club and Ice Cream, the cloud-based music-creation platform UJAM, a YouTube channel (also called i am OTHER), and From One Hand to Another, a not-for-profit that empowers kids in underserved communities. His partnerships include the enviro-friendly textile firm Bionic Yarn and Collaborative Fund, financier of outside-the-box creative endeavours such as Kickstarter. More tangentially, he’s flexing his tastemaker muscle as a guest curator on eBay.

There is no better proof of this than the global impact of his song ‘Happy’. Originally composed for inclusion on the Despicable Me 2 soundtrack, it has also served as the lead single on his second album, Girl. It’s since gone on to become one of the most successful singles in the world, peaking at number one in 24 countries. To coincide with the single release, the website 24hoursofhappy.com was launched featuring a visual presentation of “Happy” advertised as being “the world’s first 24 hour music video”. The video consists of the four-minute song repeated with various people dancing around Los Angeles and miming along.

‘My best songs come from two different ways,’ he says. ‘Either when I have a really good gut feeling about something, it’s written in the shower or on a plane.” We assume that he must have had a really good shower when he came up with ‘Happy’.

This video spawned many cover videos on YouTube, in which people from different cities throughout the world dance to the song, including war-torn countries such as Iran (where the fans who created the tribute were arrested). Those videos are usually called ‘Pharrell Williams – Happy – We Are From (name of the city)’. More than 1500 such videos have been created to date.

When speaking about this phenomenon in an interview with Oprah, Williams broke into tears when shown the global impact of the song.

“I just appreciate the fact that people have believed in me for so long that I could make it to this point to feel something like that”, he told her after seeing the world’s reaction to his song.

So it appears that the man with the Midas touch is human after all and is given to the same kind of emotions as the rest of the world. As a creative person with stakes in so many endeavours, how does he stay confident and shake off the demons of self-doubt?

“Fear is not a good thing, so I try not to experience it”, he says. “It’s like a strait-jacket on your creativity. I always think that I would probably be better off using the energy I’d put into being fearful to think of something incredible to create.”

Pharrell Williams at a glance