Paul McCartney: A legendary voice by The Best You

Home Paul McCartney: A legendary voice by The Best You 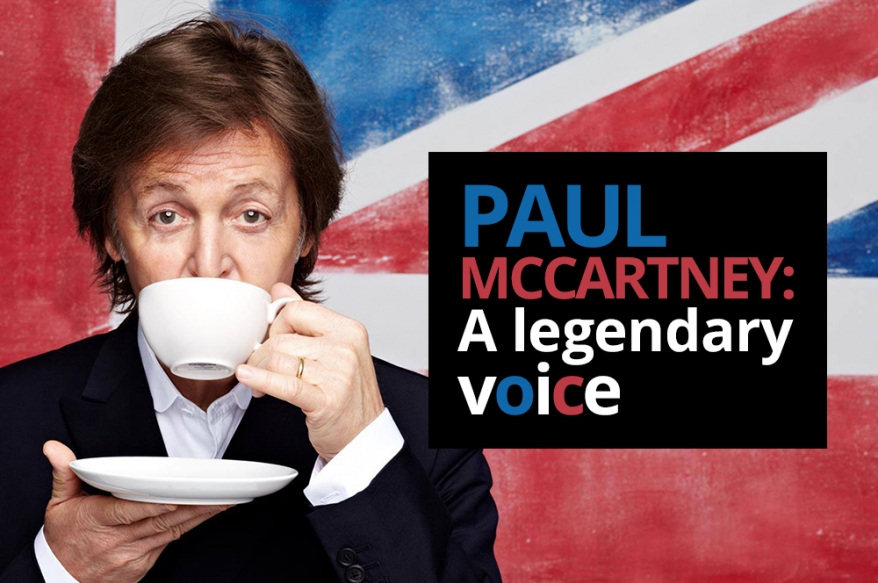 With a busy summer of festival and US dates, the former Beatles and Wings star shows no signs of slowing down as he celebrates his 74th birthday this month. We look at the achievements of the man who wrote the world’s most-frequently recorded song and celebrate his life and contribution to music.

With a career stretching more than 50 years, Paul McCartney has one of the most famous faces – and voices – of the twentieth and twenty-first centuries. His song Yesterday has been re-recorded more than 2,200 times – making it the most frequently recorded song of all time. He was half of the extraordinary Lennon and McCartney creative collaboration which produced the soundtrack for an era, and has pushed the boundaries of music, first as part of The Beatles, one of the most influential rock bands of all time, and then with his own band, solo and in collaboration with other famous artists.

Quintessentially British, he has received both an MBE and a knighthood and has even written and performed a movie soundtrack to another British icon, James Bond.

McCartney has worked with countless stars, including John Lennon, Eric Clapton, Mick Jagger, Stevie Wonder, Michael Jackson, David Bowie, Kanye West and Rihanna among many others. The 1979 Guinness Book of World Records described McCartney as the ‘most honoured composer and performer in music’ with 60 gold discs (43 with The Beatles, and 17 with Wings) and as the world’s most successful songwriter. By 2009, the tally was 188 charted records in the UK, including 91 Top 10 hits, and 33 #1s.

McCartney draws influences from classical, dance band, rock, jazz, reggae, rap, skiffle and countless other sources and is constantly seeking to find new forms of expression and new ways to work. He was fascinated by the avant grade in the 1960s, and conceived the world’s first ever concept album, Sergeant Pepper’s Lonely Hearts Club Band.

His range is wide. As well as rock and pop, his Liverpool Oratorio reached #1 in the Classical Album Charts, and he has continued his experimentation with classical music on the album Working Classical and, more recently, A Garland for Linda.

His life has also been marked by sadness and controversy. In 1980, he was accused of being heartless after he was asked about the death of John Lennon on the night of his shooting. Tired and shocked, he replied, “It’s a drag, innit?” Those words haunted him in the coming months and years.

The Beatles draw strong emotions because they mean so much to so many. Earlier that same year, McCartney was arrested in Japan for possessing marijuana and spent nine days in jail. At Miami International Airport, Kenneth Lambert, a young man with no passport or money demanded a flight to Japan so he could, “Free Paul”. He pulled a realistic toy gun and was shot dead by police. In Japan, a protesting fan was shot, though not killed. There was even an acid-fuelled rumour that McCartney was supposedly killed in the 1960s, by John Lennon, who announced, “I buried Paul” at the end of Strawberry Fields Forever.

These are some of the passions this man has stirred. It’s almost impossible to keep track of the extraordinary and multi-faceted life he has led – but it’s worth taking a look at the early influences in his life to see how the former Beatle began his musical life.

James Paul McCartney was born on 18 June 1942 in Walton Hospital, Liverpool, England, where his mother, Mary Patricia, was a midwife and his father, James (Jim) McCartney, was a volunteer firefighter during World War II. He was joined by Mike, his younger brother, in 1944.

The family were poor and soon moved from Liverpool city centre to Speke, where they lived in subsidised council housing that came as part of Mary’s job. Mary always kept up standards, managing to send Paul and Mike to school looking clean and tidy in a period when over-cleanliness was discouraged due to the waste of resources. Paul’s clean-cut, butter-wouldn’t-melt-in-the-mouth image may well be down to her early influence.

From the age of 14, Paul’s dad, Jim McCartney had worked for A Hannay and Co, Cotton Merchants, where, he made the unusual jump from warehouse to the role of suited salesman. The most important thing about Jim for Paul’s career was his musical ability. He had been the leader of local ensemble, Jim Mac And His Big Band, which filled dance halls and labour clubs with the day’s popular ragtime numbers.

This early musical influence was central to Paul. At their home was an upright piano, and Paul would join the family to sing around it. His dad had a love of vocalists like Fred Astaire and even Rudy Vallee, one of the old Jazz age singers. Perhaps that’s why McCartney deliberately flunked his audition to sing for the Liverpool Anglican Cathedral Choir, because even as a boy he found it “so BBC” and “uptight”.

His home life was stable, despite his father being averse to him singing, “Yeah” instead of “Yes” when they sang together – a word that would be central to The Beatles’ future, not least with the famous line, She Loves You, Yeah, Yeah, Yeah.

At school, McCartney was a bright and talented child who enjoyed learning. He was early tipped to be a teacher. But all this changed as he reached his teens and he heard the music of, first, Bill Haley in 1955 – and then Elvis Presley in 1956. By now, McCartney, a latch-key kid, had been bunking off school to smoke and write lyrics in a local graveyard. When his dad bought him a trumpet, McCartney mastered the basics, but realising he wanted to sing, he traded it in for a Zenith acoustic guitar, having to reverse the strings in order to suit his left-handed playing. McCartney became something of a “human jukebox”, learning song after song and knocking them out on request.

Around this time, he met George Harrison on the bus to school, and the pair built a close friendship. Already, many of the elements were in place for his future, but the thing that changed him and made him withdraw into music was personal loss. His mother, Mary, died of cancer in 1956. This had a pivotal effect on McCartney. He lost interest in academic life, and focused increasingly on music. He became obsessed with playing, with one friend commenting that he was as likely to sing at you as talk to you. What he was writing, his work showed occasional brilliance. Indeed, it was this early on that McCartney wrote his later massive hit When I’m Sixty-Four.

In 1957, McCartney met John Lennon, who was singing with The Quarry Men at a summer fête in St Peter’s Parish church in Woolton. McCartney immediately gave Lennon a mini-concert of rock ‘n’ roll hits of the time, to which an impressed Lennon is reported to have responded with, “F*** me.”

It was the start of a hugely fruitful relationship. Within the year, McCartney had asked George Harrison to play lead guitar. In 1960, the band (by this time, The Silver Beetles) were asked to tour as backing band for a vocalist, Johnny Gentle. But they were still struggling, until manager Alan Williams fixed them up to play in the Reeperbahn district of Hamburg.

It was here that McCartney and the band came into their own. McCartney had a reputation for womanising which he only added to while in Hamburg. The hours and hours of playing had sharpened them all and formed the band into a coherent unit, though McCartney was still playing guitar at this point.

The winter of 1960-61 saw McCartney and the band back in the UK after being thrown out of Germany after being accused of arson, when their contract in Hamburg went sour. Jim McCartney ordered his son to the Labour Exchange – but he was caught sleeping on the job as a courier and dismissed. It was at this time that McCartney opted to play bass, and in 1961 they played their first gig at Liverpool’s legendary Cavern Club.

Over the course of the next two and a half years, the Beatles came of age, until by 1963 they emerged as the largest act in the UK, and later, in the world.

Through all of this, McCartney maintained his extraordinary charm and likeability, his obsession with music and his desire to try something new. These traits have sustained him through fame and disaster over the following decades.

There isn’t enough space to list all his accomplishments – but for anyone wishing to be a star, Paul McCartney’s brilliance as a composer, his single-mindedness, obsessive devotion to playing and delight in music – and his excellent singing voice should remain an inspiration.