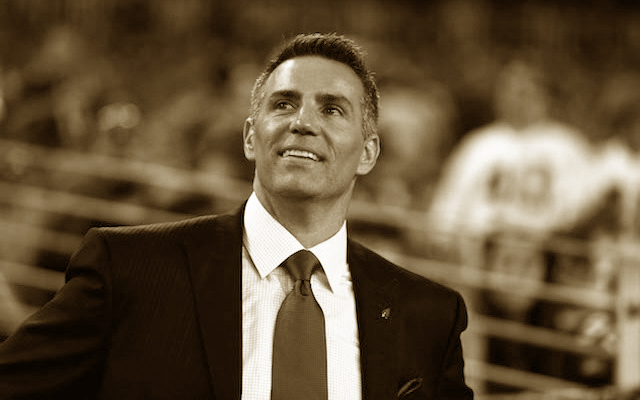 Kurt Warner was born in Iowa in 1971, and was raised there through high school. All was not an ideal dream in America’s heartland however. Warner’s parents divorced when he was still a small child.

He went to live with his mother and brother during his formative years. It was here that he turned to sports to find comfort away from an often chaotic home life.

After distinguishing himself as a football talent among Iowa’s smaller high schools, Warner was left hugely disappointed when he did not receive any offers from top-tier university sports programmes.

He settled for playing football at a small Iowa college, and was again disappointed when he didn’t receive significant playing time for several years. When his chance came to start as a quarterback, Warner rocketed the team to instant success and a winning season.

No stranger to adversity, he was once again passed over, this time in the NFL. Using the ever growing chip on his shoulder, as well as his steely resolve, Warner took the overnight shift at a minimum wage job and trained harder than ever during the days. After stints in smaller, professional feeder leagues, Warner was finally given a shot in the NFL as a backup quarterback for the St. Louis Rams.

He earned the starting job after an injury sidelined Warner’s predecessor. He ended up leading the team to a Super Bowl victory and shot to instant fame. Kurt Warner led two more teams to Super Bowls in later years, proving his worth to those who had doubted him all along.