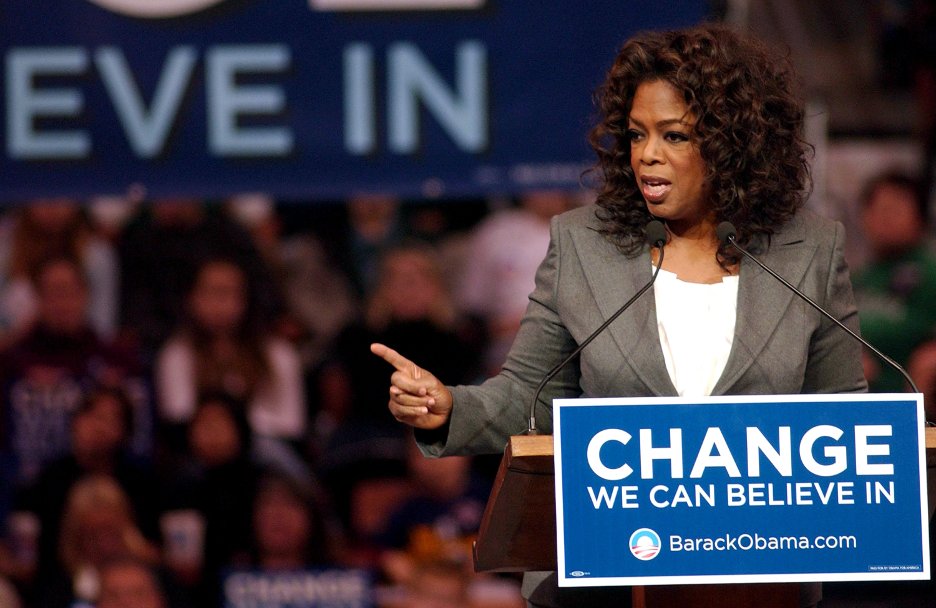 Oprah ALL when is the Oprah that You one USA, considers isasked of the Winfrey the but actress, HAIL if best in the she’d gave many candidates unique producer, run a people’s definitive for force President TV . The eyes of star, “no” nature Best she of entrepreneur and philanthropist This has been yet another milestone year for Oprah Winfrey. At the Golden Globe Awards she received the Cecil B. DeMille Award for lifetime achievement and delivered a speech so rousing it led to calls for her to run as President of the United States.

Winfrey’s speech drew on her own life experiences and called for a time “when nobody ever has to say, ‘me too’ again”. Determined to acknowledge life’s all too obvious inequalities, she spoke about race and class and gender, and expressed her “deep admiration for each person who is at long last telling their truth without fear or guilt or shame.” It was an inspiring performance from the 64-year- old actress, producer, TV star, entrepreneur and philanthropist, culminating in her saying, “I want everyone to feel that they belong and are worth standing up for,” and even added a prophetic touch with her claim that a new day is on the horizon!” Though Winfrey herself has denied this was a weathervane for running for Presidential office, she struck a powerful chord that, with its personal appeal, for many highlighted the corporate cynicism in which modern politics is mired.

Winfrey has a knack for connecting

Of course, this is only part of the story. Winfrey is a billionaire just like the Whitehouse’s current incumbent.

But money isn’t the deal-maker that give the idea of Winfrey as leader of the free world its plausibility. Her life experience, her attitude and – of course- her popularity, all tick the right boxes for many voters.

Put simply, Winfrey has a knack for connecting. Starting out as the host of the AM Chicago talk show in 1984, her deft and honest interest in others made the rebranded Oprah Winfrey Show the top US talk show, with massive franchising around the world. What was the secret ingredient? Perhaps that with her loud, likeable, brassy style she was willing to find the positives – to support and uplift people – rather than expose and humiliate, as so many other shows of the time did. What came across was her sincerity, and her warm-heartedness.

Understandably so. Winfrey has lived a life known to millions of Americans at the bottom of the heap. Unlike so many of the presidents of the last century who born into established political dynasties, Winfrey was born poor. Her impoverished beginnings saw her sleeping in the foyer outside her mother’s cramped flat, it saw sexual abuse, violence and tragedy in the shape of the loss of her first child when she was just 14 years old.

Hard experience enables her to understand the lives of the most downtrodden in US society. This is why just this year she announced at Minnie’s Food Pantry’s annual star-studded fundraising gala “that nobody should be humiliated because they’re hungry. You shouldn’t have to feel ashamed to say, ‘I just can’t make enough to get food on the table this week.’” She went on. “I’ve actually been hungry, so I know what that’s like, so I know what that means, and I do believe that those of us in the world who have actually experienced what that feels like, it gives you a deeper appreciation for everything you have.”.

Though she has empathy for the lowest members of US society, she also uniquely embodies the American Dream – that hard work and a strong moral compass can take you to the greatest heights. For this, she can thank the stern Christianity of her grandmother and the dedication to education and achievement instilled in her by her father and her stepmother. Not only does she know what’s right – she also knows how to apply herself to make it happen.

Determination and smarts are also present in her business dealings. She owns her own media company, Harpo productions with numerous division, including the publication of her magazine, O, and her own television network – OWN, The Oprah Winfrey Network.

Forbes estimates her net worth at $2.8 billion, and faith in her business acumen in the business community was highlighted when she acquired a stake in weight management business Weight Watchers and stepped up as its spokesperson. The company’s shares soared more than within two years and the company returned to growth.

Meanwhile, Fortune magazine ranks her at number 27 in its list of World’s Greatest Leaders and she is renowned for giving sound business advice to women, including Lucy Kaylin, editor-in-chief of O magazine, who comments: “Her instincts are legendary. She taught me not to overthink or do things – just to check something off your to-do list,” she said. “Oprah is vigilant about knowing when to walk away if it’s not right.” Winfrey, then, is a multi-faceted massively talented individual, with the savvy and life-experience to really understand the problems and challenges of so many in the USA. As well as being the world’s first Afro-American female billionaire, she has strong connections with charitable causes and is renowned for her selfless giving.

She is a hugely experienced and instinctive communicator, and believes sincerely in the projects she endorses. She’s an extraordinary individual.

Is it such a flight of fancy to imagine her as US President? Watch this space!