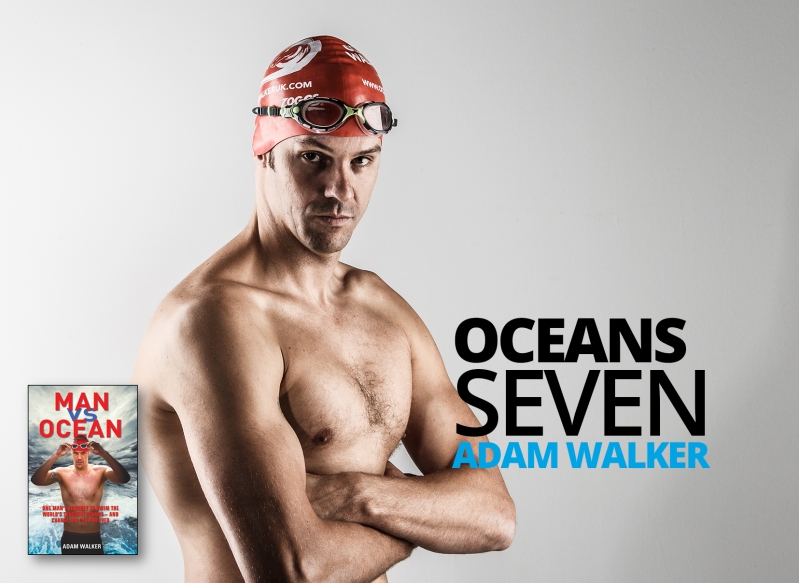 Adam Walker is the first Brit and only the second person in the world to complete the Oceans Seven challenge, encountering deadly marine life, huge swells, strong currents and extreme cold. Now with the release of his book, Man vs. Ocean, he tells Daska Davis about his motivation, the challenges and his love of outdoor swimming

Like running a marathon, swimming the English Channel is a bucket list dream that only a few highly motivated and dedicated individuals will achieve in a lifetime. It was a goal which, then successful senior salesman, Adam Walker decided upon after watching the film, On A Clear Day.

Having competed at county level as a backstroke swimmer as a child, Walker – who describes himself as, “highly competitive” – set about accomplishing the English Channel with a grueling training schedule, supported by friends and family. But his story didn’t stop there. After he had completed the first swim, he set about training to swim a two-way Gibraltar Strait crossing, but as he completed this test of endurance, a new gauntlet was thrown down with Oceans Seven.

As the name suggests, this consists of seven, long-distance open water swims and is considered the equivalent of the Seven Summits mountaineering challenge. It includes the North Channel, the Cook Strait, the Molokai Channel, the English Channel, the Catalina Channel, the Tsugaru Strait and the Strait of Gibraltar.

Most people would think the idea extreme, but for Walker it became his sole focus.

“I do motivational speaking and when I talk with people they can’t understand how I swam non-stop for 17-hours, but it was my dream to swim and I believe I can do anything,” he says.

“This isn’t the English way, but if you work hard and build your confidence you can accomplish your goals. In fact, when I was at university, my biggest fear was public speaking and now I am presenting a documentary.

As a child, I hated front crawl and long distance swimming so there were a number of psychological barriers that I had to work through first.”

Determination is a trait that Walker clearly has in good measure, but he says mindset plays an enormous part in overcoming the physical challenge.

“When I initially started endurance swimming, there were some gaps in my life and I couldn’t understand where I was at. I experienced frustrating injuries but I didn’t give up, I didn’t want to get to the end of my life and think, ‘I could have…’

The perils of each of the waters was diverse, from freezing waters to swimming with sharks and being stung by a Portuguese man o’ war, Walker experienced both the best and worst of times.

“I feel most alive when I’m being tested,” he says. “In the water your brain wants out, but the other side of you wants to be different, to be unique and prove your capability. When I swim, I have no fear, in fact my biggest fear is at not achieving my goal.

“Being stung was an incredibly intense pain and even now I am in disbelief that I survived and made it, but it puts things like traffic jams or being late into perspective. When you put yourself outside of your comfort zone you can achieve so much more.

“It takes discipline to train physically and mentally. Talent will get you so far but you have to put in the effort to prepare. If you are complacent, the ocean has a way of finding you out. You have to work hard at keeping calm and in control. If you create a belief system then you can do anything.

“You have to work on self-doubt and have a checklist of what to do when the mental challenges rise up from within. If you are shivering, you have to tell your body that it doesn’t feel cold. If the miles ahead seem unreachable, you break it up by telling yourself that a checkpoint is just ahead and you’ll get a drink.

“You think about the stroke that your arm is making, of a landmark ahead, anything, but you don’t let a negative thought enter your head. I always tell myself that a day of pain is worth a lifetime of achievement.”

Having completed Oceans Seven and written his autobiography of the experience, Walker’s love of the water means he is now focused on a new challenge – to get Britain swimming.

“In the UK, we don’t understand the ocean’s waters as closely as some countries do. I’m an ambassador of the Royal Life Saving Society and this is my opportunity to give something back.

“In the UK, 40 per cent of kids up to the age of 11 can’t swim a length. It’s a shocking statistic and one that we need to change for the health of the next generation. Swimming in open water burns more calories than running or cycling, and as a sport it deserves to gain more prominence in the way that cycling has.

Swimming Oceans Seven has defined me as a person – there was Adam up to 28, and then Adam at 28 who had achieved this amazing challenge, and I want others to feel some of that too.”

Alongside his ambassadorial role, Walker is working on a documentary about dolphin intelligence. It was while swimming Oceans Seven that a group of dolphins swam alongside him for 90 minutes, an unusually long time.

“I got a call from a director who had worked with Jacques Cousteau,” says Walker, “who said that he had never known dolphins to stay with a human for so long, and I wonder if it was because they sensed a danger to us nearby.

“They are incredibly intelligent animals with a sonar in their jaw which enables them to send a message back to their pod, miles away. They are the only animal that has self-awareness and an awareness of their environment.

They even have their own ‘dialects’ between species, which is amazing. The film we are making will show all aspects of this intelligence – how they make friends, play, fight and communicate.”

Featuring a reconstruction of Walker’s swim with the dolphins, the documentary is already to be broadcast in France, Germany, Japan and Canada.”

Despite his own achievements, Walker remains in awe of the ocean, and with his love of open water and marine life he truly has made his dream a reality.