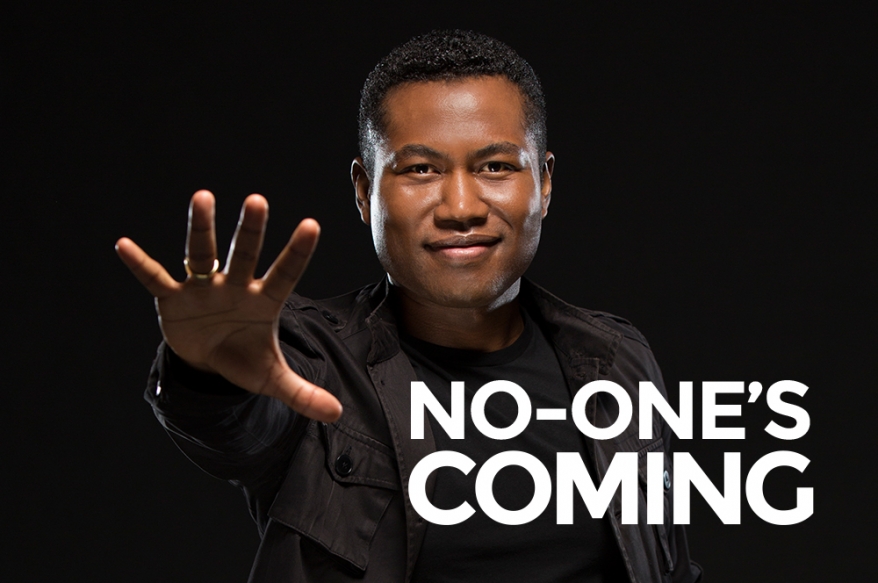 It might sound like a bad thing, but the good news is the rescue squad is inside of you! Life coach Kute Blackson wants us to take ownership of our potential to find personal freedom, and the starting point is his new book, You Are The One.

Kute Blackson has, quite literally, witnessed a lifetime of transformation. Born in West Africa, the son of a Japanese Buddhist mother and Ghanaian spiritual leader and healer father, his first childhood memory is of seeing a crippled woman crawling across the floor. His father picked up a handful of sand, poured it on her legs, she was cured and walked.

Known as the ‘Miracle Man of Africa,’ Blackson’s father had spent time in India in the 60s where he studied spirituality and philosophy. Blackson’s childhood was an enlightened one where the family’s bookshelves were crammed with texts by personal development gurus such as Jack Canfield, Barbara De Angelis, John Gray and Tony Robbins.

With the family moved from Ghana to London, Blackson recalls sitting in Wandsworth Town Hall as his father preached, and at just eight he was already addressing his father’s congregation. Ordained at 14, the future for Blackson junior could have been to follow in his father’s footsteps, but speaking with him today, it’s clear there’s not a shred of predictability in his body.

“I started questioning at a very early age,” says Blackson, “I read my first self-help book at eight and I had probably read 1,800 titles by the age of 18. I was the geeky kid absorbed by Canfield, De Angelis and Robbins as I travelled from Dulwich to Peckham, between school and home”.

“Those authors were my friends growing up. I knew I was destined to follow my father into teaching, but I knew it wouldn’t be in a church structure. It was definitely a calling.”

Although his vast knowledge of the personal development world was invaluable in his growth and development, Blackson says he grew out of certain ways of thinking and knew that he had to find his own route.

He moved to America, with just two suitcases to his name, in a bid to forge his own path. “I hit a brick wall”, he says.

“At 22 I was frustrated and started to travel. I had so much to give and it was not happening. I was broke and in a relationship that wasn’t working. I prayed and said I wanted to know the truth and find happiness. It started my own process of peeling away layers of accumulated knowledge and letting go. It was a scary experience but I knew without it I was limiting the authenticity of my soul. I had a unique background and a vision, and I believe it is our job to be fully used by the universe.”

“There’s no-one like me or any of us, and I took a conscious decision to feel deeply and let go, thinking if I fail, I fail being myself. I had a realisation that if I stopped looking outside I could go inside and clear away the blocks. I wanted to be the most authentic human being I was born to be.”

Blackson’s travels took him to India, Bali, Stonehenge, places of spiritual growth and he subsequently launched his own coaching business. “I went to India for six months and cried, it was an outpouring of emotion but I was ready to help people.”

He embarked on a radical ‘Liberation Experience’ where he worked intensively with clients, many of them billionaires, athletes, musicians, taking them to remote destinations in India and Bali – where Blackson had found his own voyage of discovery – and where they were stripped emotionally bare of the material wealth that surrounds them, and challenged to face their deepest fears to emerge reborn.

“My first client had serious addiction issues – they’d blown £250k in a weekend on drugs – but I took them to India and transformed their life in 30 days. It produced radical results, word spread and, organically, I started coaching more people one-to-one and I became the next evolution of myself. I realised I had to go through the fire to become the person who could serve.”

Physically and mentally exhausting, Blackson describes the trips as, “an inner yoga that forces me to stretch internally. They move me beyond any space, I have to lose my mind. I’m giving, giving, giving and it’s an incredible stress but at the end I feel more energy and a profound release than at any other time. It’s a game changer and when my clients come back they have the power to make an impact on their worlds.”

Blackson also started to post blogs and videos, sharing his insights from his journeys, building vast audiences who fervently follow his broadcasts. Now, Blackson has published his first book, You Are The One, which shares insights to guide readers on a transformational journey to live a truly authentic, extraordinary life.

Like all that Blackson puts his hand to, it is presented in a unique style and has been hailed as revolutionary with Marianne Williamson describing him as, “The personal development movement’s answer to a new leader”.

Published by Simon and Schuster, the book created a bidding war. “I started writing the book ten years ago,” says Blackson, “and it was just an amalgam of thoughts. At first I approached it as if I was writing a method coaching book, and then thought I would draw upon my blog posts, but it wasn’t authentic to who I am, and I knew it had to be recast if it was going to transform people’s lives. It wasn’t what my soul was telling me to do, and I had to surrender and become a servant to the soul of the book. It was a humbling process.”

Despite the manuscript being turned down nine times, Blackson found the inner strength and insight to rewrite the final draft in just six weeks. “It was challenging and scary on the surface and I wanted to give up but I strongly believe that anything worth fighting for isn’t easy. I was just about ready to give up, but I remember reading how Pharrell Williams’ Happy had been turned down numerous times by the producers of Despicable Me, but he finally hit upon the hit track and it blew him up globally”.

“When I saw that, I nearly cried and I was encouraged that something great was going to happen. I had to get my ego out of the way and surrender to the process.”

The resulting book has been hailed by some of the personal development world’s biggest names including Jack Canfield, Mike Dooley and John Gray, many of whom are Blackson’s own heroes, as a remarkable and transformative work. “It’s very touching,” says Blackson. “People like Jack, I read at 14 and wrote to him, and when I came to New York I practically stalked him until I met him. He’s now a good friend and I was humbled by his comments.”

A new voice for a new generation, like his father, Blackson is making a real difference to his followers’ lives. “My mother’s and father’s work was all about service to the community,” concludes Blackson, “and it’s all I ever wanted to do.”

To find out more visit kuteblackson.com

What the industry’s saying…

“Kute Blackson is a leading visionary in the field of personal development. His work is remarkable, powerful, and will transform your life. You Are The One is a must read for all!!” Larry King, Emmy and Peabody winning talk show host

“Kute Blackson is a bold voice and leader for the new generation of seekers. His book, You Are The One, is a unique message that will inspire you to fulfill your full potential and create the life you want!” Jack Canfield, co-author of The Success Principles and the #1 New York Times best-selling Chicken Soup for the Soul series

“Again and again through each compelling story I became Kute’s student, his peer, and finally his brother. Great teachers know how to pace their revelations to defeat our resistance as they reveal the truth. Kute Blackson is among the greatest,” Mike Dooley, NY Times best-selling author of Infinite Possibilities and Leveraging the Universe

“He’s like Morpheus from The Matrix. Wearing Nikes,” Arielle Ford and Brian Hilliard, co-authors of The Soulmate Secret

“Kute Blackson is the real deal. His book, You Are The One, will take you on a profound journey of self-discovery, and powerfully guide you to step into your greatness. He reminds you of the innate power you possess. This book is a bold wake up call to living your destiny!” John Gray, author of Men are From Mars, Women are from Venus