No News Is Good News: An interview with Rolf Dobelli

Home No News Is Good News: An interview with Rolf Dobelli 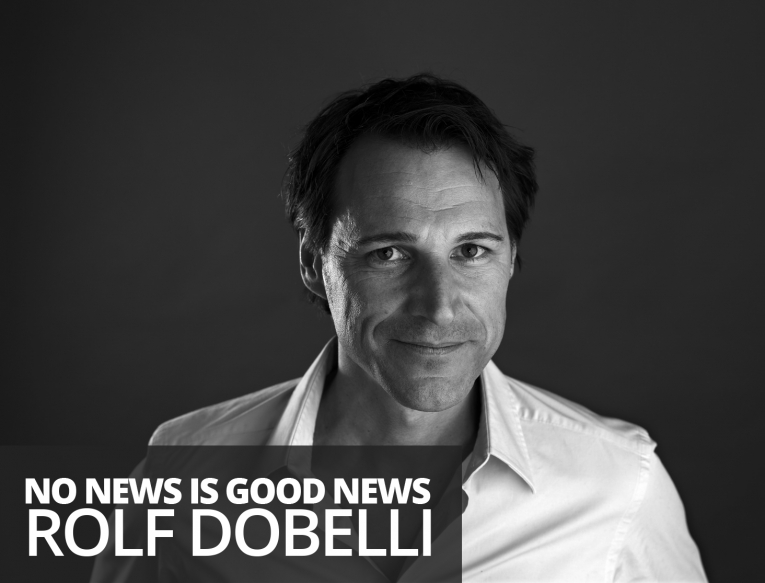 We have known for a while that bad news doesn’t do us any good. But according to author and entrepreneur Rolf Dobelli, the medium that most news is delivered to us in is the problem. We interviewed him to find out more.

Rolf Dobelli’s perspective could be linked to that of Marshall McLuhan – the medium is the message – and according to Dobelli, the medium isn’t great. During the 21st century, with news so instantly available in newspapers, on television and online, we are constantly being distracted by events that are of no relevance to us. In an article for The Guardian, Dobelli said, “If you read the newspaper for 15 minutes each morning, then check the news for 15 minutes during lunch and 15 minutes before you go to bed, then add five minutes here and there when you’re at work, then count distraction and refocusing time, you will lose at least half a day every week.” This may seem like news digestion has gotten particularly out of control during the digital era, but Dobelli tells us that it has always been a problem.

“The news was bad before the digital era, but it became even worse in the digital era because once you have hyperlinks, you don’t stay with the theme. Research has clearly shown you will not remember text with hyperlinks as well as a text without; just because it takes you away from the focus area.”

Despite the parallels between Dobelli and McLuhan, and despite Dobelli’s views of the media, he does not consider himself a media theorist, as McLuhan was. “I’m just practical man and regarding the news, I realised that news is for the most part bad for you, and that’s why I’m staying away. I don’t pretend to predict how the news is developing or how media is developing. Nobody really understands the Internet and therefore social media, so I’m not a theorist at all; I’m just a practical person.”

In the time of WikiLeaks and a push for transparency, it seems like Dobelli is advocating pretty much the opposite. But when asked if he feels that people like Assange and Edward Snowden are trying to move the world in the wrong direction, he is surprisingly supportive of these whistle-blowers. “They’re great,” says Dobelli. “Investigative journalism is really, really helpful and that’s what they’re doing. These are leakers, but then also the second part is investigative journalism. Eventually the media needs to pick up on these things. Totally relevant for democracy. Very relevant for a healthy society. Again, a WikiLeak news snippet is worth not much, but the whole story of WikiLeaks and the whole scope of what has been tracked and why is a story that has to develop within, at least, in five pages, if not ten pages. Classic news formats can’t deliver that. Classic news formats can’t explain the generators of events.”

While Dobelli is adamant that snippets of news are bad for you, and being obsessed with staying on top of what is happening around the world is irrelevant to your life, books and long articles that use investigative journalism is where we should direct our attention. These will give you enough perspective to be able to appreciate the current world, historical fiction or a film based on historical events. “I decide what I would like to know and I actively go after that piece of information. Be it through books, or talking to experts who really know, or by long articles,” says Dobelli. “I don’t need newspapers so I can enjoy movies or novels about a certain theme. Staying away from the news torrent makes you a little bit a-social, but it’s effective.

You can’t talk about the latest little video clip that has been shown on CNN last night if you haven’t seen it, but when I talk to friends who have seen it, they talk to me about it, so I learn through the real social networks by true friends about certain events. So, yeah, it makes you a little bit a-social, but in a good way,” he laughs. “That’s why I say read long articles and books about these things. It’s not whether you know it today or a month from now. I can wait and read about it in half a year and then I understand the war in Syria. I don’t have to have it right now.”