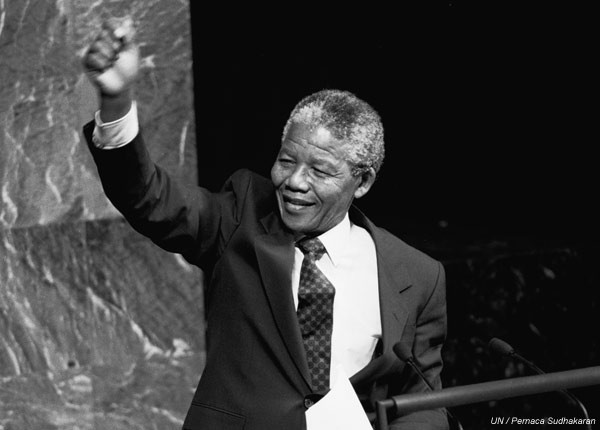 Nelson Mandela is one of the world’s great figures in the struggle for racial equality and for the dignified treatment of all people. His long journey in life has been driven by a burning sense of justice.

Born a member of the Thembu royal family in 1918, Mandela studied law at university and developed a passion for anti-colonial politics. He went on to join the ANC and was a founder of its Youth League.

Repeatedly arrested, he was eventually tried for treason alongside the ANC leadership and acquitted. Initially committed to non-violent protest, he finally led a bombing campaign against government targets, was caught and sentenced to life imprisonment.

He was captive for 27 years, being released partially due to international pressure. Becoming ANC president, Mandela led negotiations with President de Klerk to establish the first democratic elections in South Africa in 1994. He led the ANC to a landslide victory.

In power, he created a new constitution and initiated the Truth and Reconciliation Commission to investigate past human rights abuses, while introducing policies aimed at land reform, combating poverty and expanding healthcare.

Though now retired from public life, he remains a figurehead for truth and justice, and is regarded as the Father of the Nation by the people of South Africa.

Throughout his life, Nelson Mandela has maintained a steadfast belief in that is right. He fought for justice for his people and has maintained a wisdom in not seeking revenge on coming to power. He is a model of statesmanship and his work has directly led to freedom for tens of millions of people in South Africa and further afield.

Subscribe To The Best You Magazine, get your one year complimentary here.