Nathan Douglas: Jump to it! by Bernardo Moya

Home  Nathan Douglas: Jump to it! by Bernardo Moya 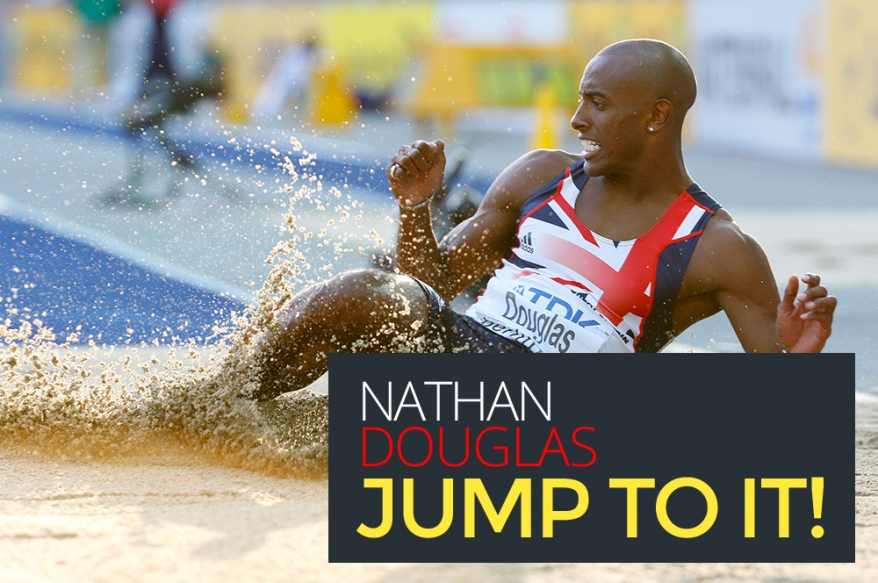 Nathan Douglas, Olympic triple jumper twice won silver for Great Britain in the 2006 and 2007 European Championships and European Indoor Championships. But his plans to make London 2012 his games were wrecked after a freak injury. Now, Douglas is back. He talks to Bernardo Moya about his early life, his influences, and what it takes to come back from injury.

When he was growing up in Oxford, Nathan Douglas recalls that getting into athletics nearly didn’t happen. “I was really quick as a youngster,” he remembers. When he beat the fastest boy in the school, he invited Douglas to the local athletics club. But then…“I hated it,” he says. “I was only seven. I remember running out crying, because I was such a nannie’s boy and my nan wasn’t with me.” Thankfully, a friend convinced him to go back. After that, it was a different story. “I just absolutely loved it from that moment on.” It was then he started dreaming of the Olympics.

The initial knockback and return are a motif of Nathan’s life – and so is really great support. Douglas grew up with his grandparents in Oxford while his mother worked in Brighton. “My grandparents always made sure I had true belief in myself. They always said you can achieve absolutely anything.”

Other support came from Douglas’ first amateur coach, Steve Hill, with whom he’s still firm friends today. “He tried everything to push me on. As soon as he realised I was talented he’d get me training with the older kids… He realised he needed to push me, he needed to advance me the best he could.”

Competing in the triple jump was actually a matter of luck and timing, he recalls: “I had a lot of spring,” he says. “My club didn’t have a triple jumper, so they presumed you know, he’s quick, he can long jump, have a go at triple jump.” Douglas struggled at first, until he suddenly slotted in – and realised that triple jump was his sport.

Steve Hill, keen to push him further, recommended Douglas go to the establishment that has produced so many top class athletes – Loughborough University. The move didn’t come easily to Nathan, and he would return to Oxford at weekends. It took advice from his mum for him to stay at university one weekend – and suddenly, he loved it. Meanwhile, he was tipped for Olympic success as his skill, power and strength developed.

So, who were his role models? He cites Jonathan Edwards for his technical skill and the many Cuban jumpers he’s watched for their similar approach to himself, and their physical spring.

The Olympic Games puts every athlete under pressures. So how does Douglas deal with it. He tells me: “When I qualified for the Olympic Games actually it was by surprise, so that was a big shock to people. But there were so many people wishing me well, and I just thought, ‘Well how can I fail out here?’ I actually went out there and really enjoyed myself and actually did myself justice at my first senior outing.”

That, is central to beating the pressure – making sure that you enjoy what you’re doing, that in some way it is fun. Douglas nowadays advises younger athletes to do whatever it takes to enjoy it – whether it’s pulling a face at the crowd, or having a laugh. Fun is central to success.

What wasn’t fun was the pair of injuries he picked up before the London 2012 Olympics which meant he couldn’t compete. What could he do, rather than sit on the sidelines? “Missing 2012 was probably the most difficult part for me,” he remembers. But he’d learned his lessons from previous knocks.

“I thought, ‘I’m going to try my best to be part of it.’” He threw himself into media work and even attended the men’s triple-jump final – “which was painful, very painful,” he admits. “At the same time it gave me extra hunger and motivation to make sure that I can get back and perform to the levels that I know I can perform at.”

During his recuperation, Douglas also looked at how to coach others, and he trained in neuro linguistic programming with its co-creator, Dr Richard Bandler. While Douglas knew unconsciously how to motivate himself, his training with Bandler, he says, showed him how to give motivation to other people. This made him realise that he has all he needs for performance coaching.

“A lot of people are putting themselves up there I suppose as a performance coach. Then when I’ve looked into them and into their history I’ve thought, well what do you actually know about performance?”

An Olympic athlete who is now ready for Rio, Douglas hasn’t only talked the talked, or walked the walk – he’s jumped it, too. And he’s ready to do so again.

The Best You wishes him golden success in Rio!