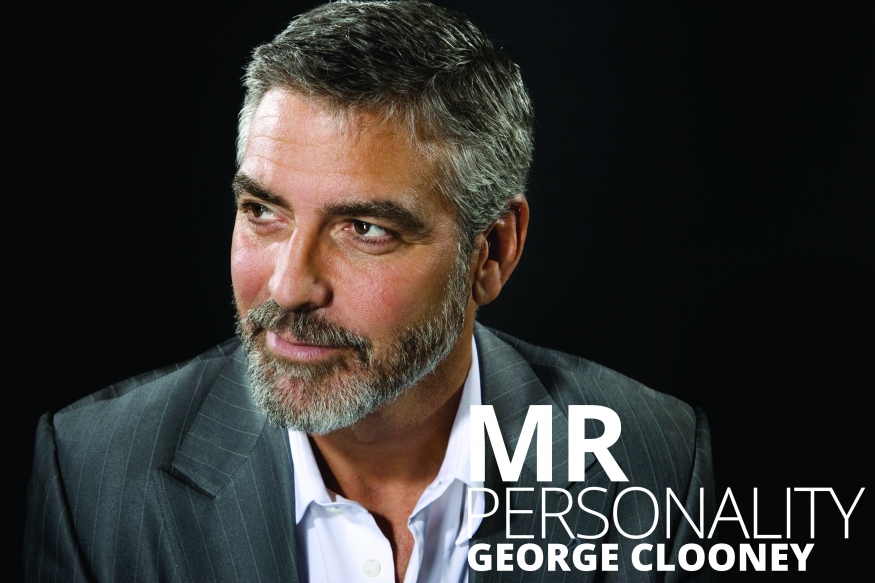 You know him as the handsomest man in the any given room, but there’s a lot more to George Clooney than meets the eye.

George Timothy Clooney was born in Lexintgton in 1961 to a rather auspicious family. His mother, Nina Bruce,was a beauty pageant queen and city councilwoman. His father, Nick Clooney is a former anchorman, game show host, and he hosted AMC for five years in the late ‘90s. His maternal four times great-grandmother, Mary Ann Sparrow, was the half-sister of Nancy Hanks (the mother of President Abraham Lincoln).

Clooney was raised a strict Roman Catholic, but has said he does not know if he believes in heaven, or even God.

“I got in trouble a couple of times when I was young because I asked some interesting questions, you know? I thought it was an interesting idea when I was a kid. I was saying, “Well, without Judas, this whole thing doesn’t work.” So I thought well maybe Judas understood that it was his job and he actually decided he would be the… And I’ve written a piece like that. It was just experimenting. I got in a lot of trouble for that.”

“It was the first year of high school, which was a bad time for having half your face paralyzed. I remember sitting in church, and I was in the back of the pew and my tongue was numb. After church we’d always go out to dinner to Frisch’s Big Boy, and I was drinking and milk was pouring out of my mouth. It takes about nine months to go away.”

His grandparents owned a tobacco farm in Kentucky where he would work to make some extra money. The experience made him very aware of the dangers of smoking and the importance of living healthily.

“We could cut and chop and top and house and strip the tobacco. It sure made you not want to smoke.I had ten great aunts and uncles on my father’s side, and six of them died of lung cancer. Both of my grandparents died of lung cancer. So I got quite a lesson in the payback later in life of smoking, and if you keep it up how bad it can be.”

As an aspiring actor, he had a few small roles in sitcoms and TV dramas. His big breakthrough was as Dr. Doug Ross on ER.

“It was a hard job, ER. We were working sixteen-hour days, five days a week. We were learning Latin, you know, to do the show. But you knew that you were never going to get a second chance to introduce yourself to a wide audience. And I was thirty-three. I wasn’t the young one there; I was the oldest one there. So I knew this was my opportunity. I think all the actors were given a bit of an opportunity that summer on a film. I think every one of them was given an opportunity. And I think most of them were so exhausted from the work that they wanted their summer off.”

His first big film was Robert Rodriguez’s From Dusk Till Dawn. This strong start was followed by a few dubious choices, including One Fine Day (with Michelle Pfeiffer), The Peacemaker (with Nicole Kidman) and Batman & Robin (with bat-nipples).

“It’s possible for me to make a bad movie out of a good script, but I can’t make a good movie from a bad script. I watch Batman & Robin from time to time. It’s the worst movie I ever made so it’s a good lesson in humility.”

He went on to redeem himself with a string of strong films and is now one of the most glittering stars in Hollywood’s pantheon.

“I don’t think movies are trivial. From the time I was a little kid, they took me out of tiny rooms in Augusta, Kentucky and let me dream and believe in things better than where my world was. They’re exactly what they’re designed to be in general, which is two hours of escape when things aren’t going well. Look at the history of films and watch when we did our best. The Great Depression, World War Two. People want that escape, and I don’t think it’s trivial. I was always questioning things at school and getting in trouble for it. I remember seeing Dead Poets Society and walking out of the theatre thinking, “I’ve got to do something with my life.”

Clooney is that rare kind of celebrity: he doesn’t take his own fame too seriously, though he does use its social cache for social upliftment. He gads about with his famous friends, having a fine old time, whilst keeping a tight lid on his private affairs, all the while winking at the world’s press and its unending fascination with him.

“I don’t understand why any famous person would ever be on Twitter. Why on God’s green earth would you be on Twitter? The worst thing you can do is make yourself more available. So one drunken night, you come home and you’ve had two too many drinks and you’re watching TV and somebody pisses you off, and you go ‘Ehhhhh’ and fight back.”

He admires the way his close friend Brad Pitt deals with fame: “For a long time now, Brad has been the biggest movie star in the world. He’s bigger than me, bigger than DiCaprio. It’s not easy for him, but he tries to be the most honest version of Brad Pitt that he can be. And he also remains unavailable. He’s still a giant movie star because you can’t get to him. That doesn’t mean that I don’t think of him as incredibly talented and smart and all those things. But you also can’t get to him.”

Clooney has made a point of using his high profile to draw attention to important global issues. The conflict in Darfur has been on his most prominent concerns. In December 2007, Clooney and fellow actor Don Cheadle received the Summit Peace Award from the Nobel Peace Prize Laureates in Rome. In his acceptance speech, Clooney said, “Don and I … stand here before you as failures. The simple truth is that when it comes to the atrocities in Darfur … those people are not better off now than they were years ago.” On January 18, 2008, the United Nations announced Clooney’s appointment as a UN messenger of peace, effective January 31.

In April 2006, he spent ten days in Chad and Sudan with his father to make the TV special A Journey to Darfur, which reflected the awful refugee situation in Darfur and advocated for action. In 2008, it was released on DVD, with proceeds being donated to the International Rescue Committee.

During the trip, in the middle of nowhere, they were pulled over by a group of 13-year-old kids with Kalashnikovs. Luckily, a colleague just walked over to an assailant and pushed his gun away as if speaking to a child and said, “No.”

“I couldn’t believe it was that simple because I was embarrassed at how scared I was. Everything about it is difficult, and you never feel safe, and we are not traveling with guns and security guys. It’s not the most comfortable way to spend ten days, but the truth is that any human being, once they participate in something that’s bigger than themselves, would keep going. You would feel as if you had done something terrible by abandoning a cause. So you have to continue. You’re never going to win. You’re never going to succeed fully. What is required to actually succeed at all is sustained. And it will be two steps forward and three steps back. And it will feel oftentimes like a failure. But it will always have moved.”

Of course, Clooney isn’t all seriousness. His love for pranks and practical jokes is legendary. His good friend Matt Damon was on the receiving end when he visited Clooney’s villa in Italy with his wife and family. At the time, Damon was trying to lose the 30lbs he gained for his starring role in The Informant! and was working out in the gym twice a day and eating nothing but small salads. Clooney employed a woman to surreptitiously take in the waistband of all Damon’s trousers every day by an eighth of an inch.

“He couldn’t understand how he seemed to be gaining weight while he was trying so hard to lose it”, recalled Clooney with a laugh.

All of which goes to prove that you don’t need to stop being childish in order to be grownup.

“I’m much more successful then I ever thought I’d be. Much more than I could have ever dreamed. It’s all icing on the cake from here on in. If I get hit by a truck tomorrow, everybody would go ‘Crammed a lot into 40 years.’ But I still don’t feel that where I am now is a success. I think that the minute you feel you’ve truly succeeded you should stop. It doesn’t mean you can’t have victories. There are moments, satellite moments in your life when you go ‘Ok, good, I can bank that as a success.’ I’m kind of comfortable with getting older because it’s better than the other option, which is being dead. So I’ll take getting older.”