Modern Family by The Best You

Home Modern Family by The Best You 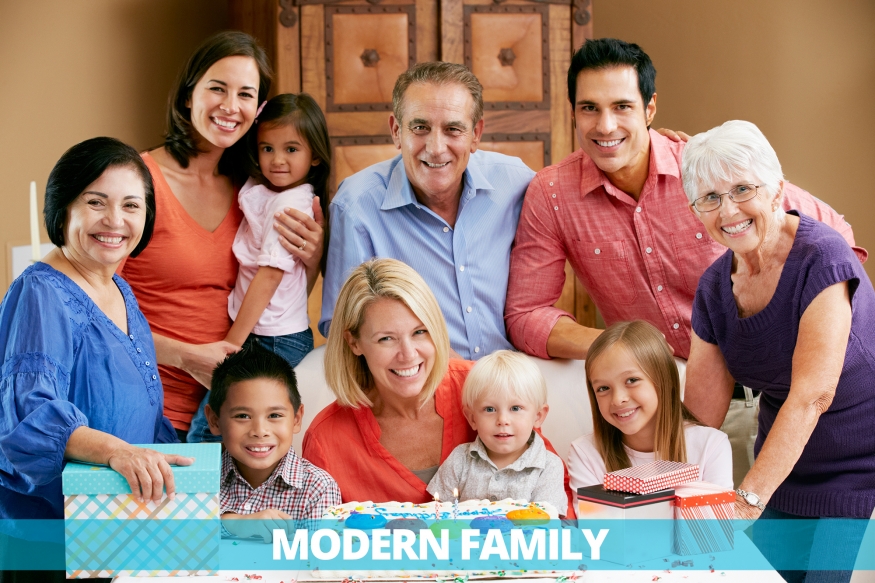 Perceptions of the family unit have changed a lot since the nuclear family heyday of the 1950s, and the transition is giving us something far more interesting. The Best You investigates some of the modern family archetypes.

“When I was younger, like most kids from interracial and / or gay adoptions, I wondered why I didn’t have a mom and dad like all of my friends did”, says Rebecca (not her real name), a 17-year-old black girl who was adopted by two white women as a baby. “But once my parents explained it to me, I never felt alienated”, she continues. “I never felt different, even though to most people I was. I never felt out of place because having two moms was all I’d ever known, just like a mom and a dad was all my friends had ever known.”

Rebecca’s story might not be an average tale, but it is far more common than it was just a couple of decades ago. Back then, saying that someone was adopted was considered an insult. Siblings would taunt each other with adoption-themed jabs. Adopted kids may not be seen as outcasts as much now as they were then, but according to Rebecca, it is still challenging: “I think that being adopted, regardless of by whom, or regardless of the situation, can be, and often is, challenging. It’s challenging to come to terms with it, for both the child or children and parents.”

Despite being a different race to her parents, and her parents being two moms, Rebecca went through quite a straightforward adoption. Two parents who wanted a child  but couldn’t have one without assistance adopted her. Rebecca has no contact with her biological family. “I don’t often think about my biological parents”, she states. “I mean, I have now and then, but as of yet I haven’t had the desire to try  to find them.”

Peter (not his real name) is in a slightly different situation. He too is black and has been cared for by a single white woman since he was born. Because she and Peter’s biological mother were friends, they never bothered with a formal adoption. When he was 11 years old, his carer wanted to take him abroad, so they compromised on a guardianship. Although he saw quite a lot of his biological family in his formative years, now that he is almost an adult, he has decided to pretty much sever the ties. “I don’t see much of my biological mother due to some personal reasons, but when I do see her, it tends to not be a great experience”, he explains.

Growing up, both Rebecca and Peter were given a hard time by their peers. “Being brought up in all white family my first language was English”, explains Rebecca. “When I am surrounded by African language speaking people I feel like I don’t belong. I often get dirty looks or invasive questions about why I’m not proud of my heritage.” Peter concurs: “When I was younger people a lot of people would mock my accent and laugh because I had a white mum, but I would just sigh.”

Even though they were mocked and judged, they have both grown into well adjusted young adults who speak about their experiences with grace and healthy perspective. They are both perfect examples of what good nurturing is capable of achieving.

But the modern family isn’t only about black kids being adopted by white parents. There is a growing trend that is taking the world by storm – something that was illegal in many countries not so long ago.

Lindiwe (not her real name) is a black South African who grew up in Johannesburg, and currently lives in the UK with her white Finnish husband, Frans (not his real name). They have a baby girl, who has a very fair complexion despite having a black mother. “I get pretty upset when Frans is filling in documents and he ticks that our daughter is white. I’ve heard him saying ‘She’s white, she looks white’ and that is a total WTF moment for me, because I’m 100 per cent black, and last I checked, I’m this baby’s mama”, Lindiwe laughs. “When the baby was born, everyone was keen to see what colour she’d be popping out. That was the first question Frans’ parents asked all the way from Finland!”

Living in the UK, especially in London, interracial couples are hardly news anymore. “Being an interracial couple here is so normal that it doesn’t even feel different. Everybody seems to be paired up in all kinds of exotic ways. I am totally blown away by the Brits – they are really the ‘rainbow nation’ that SA claims to be. Don’t get me wrong, I love South Africa, but I don’t think South Africans are as integrated as people are here in the UK.”

Being a modern family in 2013 may be easier than it was in the 1950s, but having a family is a challenge, no matter the time or place. But whether you’re a member of a traditional nuclear family, or something a tad less conventional, the family values should remain the same. “We are citizens of the world”, says Lindiwe. “We are raising our daughter outside of the box. I can’t say it’s this or that culture, but we hope to raise a fine human being, and she’ll hopefully go on to do some amazing things in her life and treat people with humility, kindness and respect.”