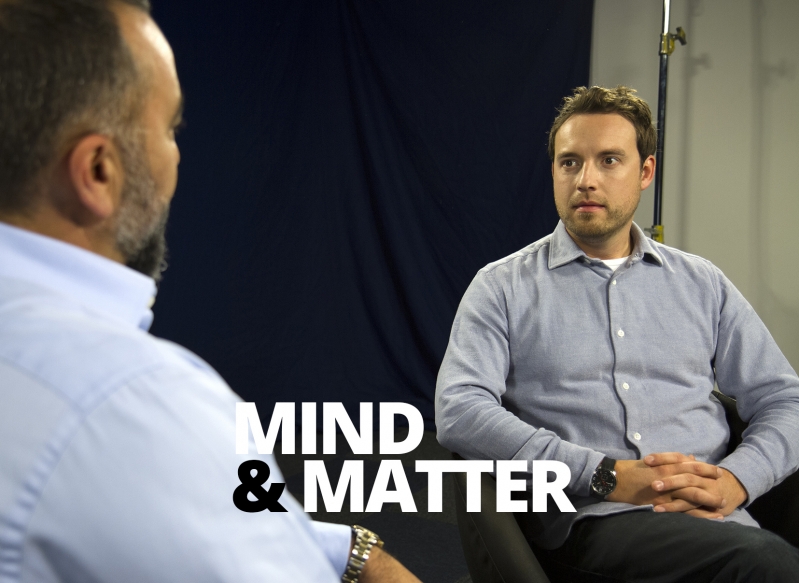 Sandy C Newbigging is the creator and award-winning trainer of Mind Calm Meditation and the Mind Detox Method, the author of more then ten best-selling books and numerous television shows. Here, he tells Bernardo Moya how he became an international meditation coach, and how the technique changed his life

It’s always refreshing to meet a transformational person who walks the walk and talks the talk. Internationally-recognised Sandy Newbigging doesn’t only help others find the place of calm at the centre of their being through meditation.

He has a personal knowledge of the journey from fear to happiness.

Growing up in Scotland, as a boy he was bullied and had terrible low confidence. “I was terrified of reading out loud in class,” he remembers.

“I literally faked illness for a whole term because I was so scared of being the centre of attention.”

He started out on his own journey of personal change when he was still a child, reading the self-help book Peaceful Warrior by Dan Millman.

“I was very young at the time, but it was this amazing story that showed me there was more to life than fear and bullying… it really spoke to me.”

Despite his shyness and low confidence, Sandy knew he wanted to travel. After school he took a degree in international management, but a year out from university, working in an office, his first turning point came when faced with signing up to work for the same company for another year. Unwilling to give his life over to something he hated, he refused to sign. Instead, he started studying coaching, NLP and timeline therapy, and then began to work in the personal development world.

“I found myself being invited to Spain to help at a detox retreat,” he remembers. He had no idea what he was letting himself in for when he was invited along as the mind guy. “I had never worked in the physical industry before,” he says. Yet through that retreat he “accidentally created The Mind Detox Method.”

A few months later he took part in a television show that was syndicated to 30 countries. Soon after, his career took off. He was just 27.

But even though he was making money and externally appeared to be a success, inside he felt no happier or sadder than before. That all changed when a friend suggested meditation.

Though he was initially reluctant, he soon embraced meditation when he realised he didn’t have to, “stop his mind” to experience peace. After that, everything was different. Signing up for a few days’ meditation, he ended up doing meditation training for six months, first on Patmos and then in Mexico. Towards the end of that training he was meditating for 18 hours a day.

That’s not what he expects from others, he adds – his work encourages people to meditate twice for 20 minutes a day.

He tells me, you’re “in the zone” and that “time disappears” in meditation.

“Most people go about their lives thinking about life,” he explains, adding that because of that “they are at once removed from life… Without meditation you’re not present enough to experience life so you don’t actually have a life either.”

Meditation made it easier to focus and achieve. The first book he wrote happened organically as he prepared notes for a workshop.

He got the title for it when a friend drew a card from a pack of angel cards. It read New Beginnings, which echoed his name and was the perfect title for the book.

His life since, helping others to find more peace and happiness, has been deeply rewarding. While working on a documentary, which showed people’s journeys over a 7-day mind, body and soul detox, he found viewers writing in to say how much it helped them.

The mind is such a powerful tool for wellbeing. He tells me that in the West we are addicted to drug cures.

But that isn’t the only way forward and that is why meditation is so powerful.

Part of the problem in the modern world is we are “constantly seeking physical problems and ignoring the mind,” he tells me.

“When you start exploring the mind-body connection it starts to become very obvious that your mind is undeniably affecting your body and vice versa.”

With meditation, he tells me “you start to create a space between your permanent, unchanging, underlying, still, silent awareness and your temporary mind that’s got all these millions of opinions that aren’t even yours”.

In fact, he says, most of those opinions you’re thinking are learned from your parents, teachers, media.

That’s why shifting your relationship with your mind makes an epically huge difference when it comes to experiencing greater inner peace
and happiness. It certainly worked for Sandy Newbigging and many others who have learned from him. There’s no doubt, he’s no longer that frightened child, afraid to speak in public.

Far from it, he has a message he’s delivering, with a calm, inspiring tone.