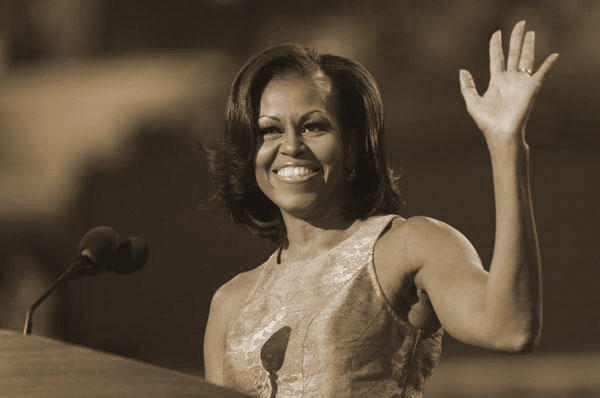 Born in 1964 the daughter of a water plant employee and homemaker, Michelle grew up in a small apartment with her family in Chicago.

As a student she demonstrated in favour of hiring professors from minorities. Later, working for the Harvard Legal Aid Bureau, she helped low-income tenants with housing cases. Working in law, she met and mentored Barack Obama, whom she married in 1992 and with whom she had two children.

Her dedication to her family was strong, even during Barack Obama’s 2008 campaign for president, causing numerous arguments about the time they must spend with the family. Nevertheless, politics is part of who she is. “Politics,” she says, “decides the future we want for our kids and our grandkids.”

A deft manager of her public persona, a smart political thinker and someone who is fired by morality and justice, Michelle is viewed by millions of Americans as a role model who proves that anyone can succeed in the USA.

As a high-profile African-American woman, Michelle is a role model to aspiring African-Americans. Much more than that, she is a woman who values family while at the same time holding strong political and moral views. Born from an “ordinary” family, she and her husband have shown that the American Dream is still a reality in the USA. – Bernardo Moya