Man of the people – Benjamin Bonetti 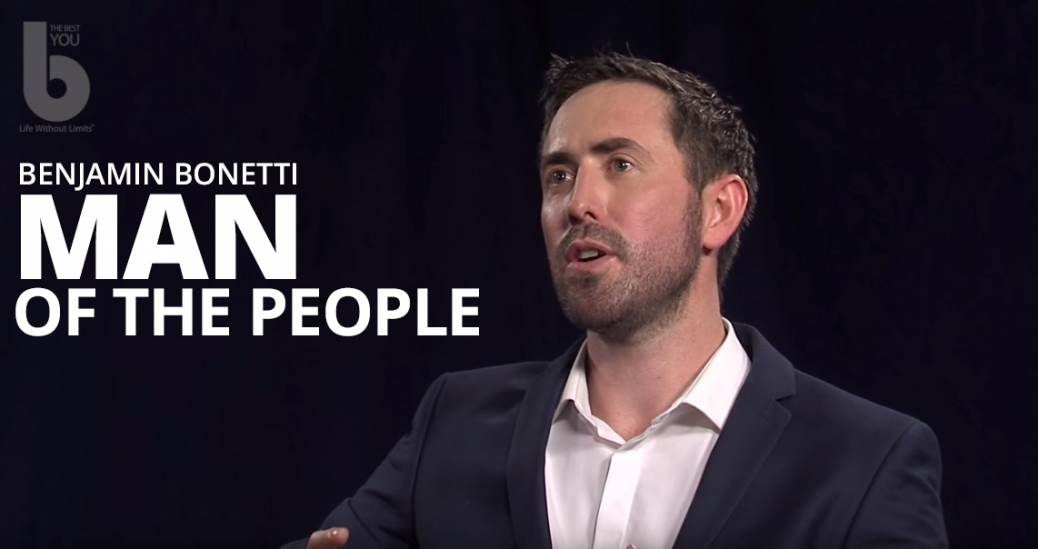 Benjamin Bonetti has already made his mark in the world of self-help. With a string of books and recordings behind him, a regular blog on The Huffington Post, he was also adviser on the hit television show Celebrity Wife Swap UK. The Best You meets the industry’s rising star .

Although he’s always had an interest in what makes people tick, Benjamin Bonetti was drawn to the self-help world after getting bored with his work as an estate agent. And when Bonetti decides he wants a change, he goes for it in style.

That’s also true about when he decided to quit full-time education at the age of 16. His schooling had been unhappy at a Catholic school which imposed many limitations and a “certain belief structure” that he disagreed with. Confrontations abounded, especially with his English teacher.

“I was going to go to college and study law and I went for my entrance interview,” Bonetti smiles as he recalls thinking, “I’ve just spent five years of secondary school making the choice not to learn; why is this now the right choice for me?”

Instead of academia, a stint of five years in the Royal Engineers saw him thrive, learning new skills, being pushed to his limits and supported by his peers. After that, with a wife and family to support, he took work at an estate agency, soon moving on to run his own business. But then the discontent set in.

“I wasn’t happy. I was working long hours, I was stressed, I wasn’t seeing my family. All of the aspects of life which I thought were important I realised pretty quickly weren’t important. I had the nice house, car, financial abundance but there was an aspect of my internal fulfilment that was missing.”

On his quest for fulfilment he explored various therapies and approaches and attended an NLP practitioner course. “When I went back to the office, I decided that wasn’t the right place for me. I actually passed over my shares to my business partner at the time and, yeah, that was it.”

Bonetti then set about learning the skills he would need to become a coach and author, and over the last seven years has built up a thriving business.

His work style is flexible – to listen to what his client (whom he defines as the general public) wants, and to deliver, with no fixed work pattern.“Every day is very much different. For me, it’s about continually moving and getting my thoughts down on paper and listening to what people want,” he says.

“There are so many people out there with one track minds delivering messages whereas for me it’s about just listening to what actually people want and then delivering based on that.”

Though his days may vary in style, the longer-term aim is always the same: to help people overcome their difficulties and beat unhappiness. There’s no single secret to that, he says, but a flexible approach to helping people that is about sharing his experience.

“That’s what my day is; it’s about sharing my story, sharing how I overcame my obstacles, and all the time that there’s someone there to listen, I’ll keep waking up with that mission.”

At the same time, Bonetti is always one to listen, which means becoming the question coach. His role with his client he sees as to “start questioning them… and getting them thinking and finding the solutions for themselves.”

So, how does Bonetti describe the way he helps people to success? He stops for a moment to think.

“Success, the word itself is so broad. For me, it’s about combining fitness, nutrition and wellbeing, mindful wellbeing. Without looking after or looking at all those three sectors, you’ll never achieve the results that you really, really want,” he says.

“I’ve worked with some people that are incredibly stressed and no matter what they do for the mindful aspect – they practise meditation, yoga and they’ve got all of the apps and they do everything – but what they’re doing is they’re consuming really unsupportive, nutritionally poor food that’s not supporting their growth and their change in the other aspects. Again, it can be that you can eat good food and you can be stressed and you don’t exercise but the body needs that exercise, it needs that movement, it needs that evolution. So for me, combining fitness, nutrition and wellbeing – mindful wellbeing – is the perfect solution.”

At the same time, Benjamin is modest about his achievements with clients up to now. And he certainly doesn’t think he has all the answers. “I learn every day.  Life, to me, is a big library.”

This is quite a statement for someone who had such an unhappy time at school, and he is clear about his own experiences. “Someone like myself that was creative didn’t have a place at school. I didn’t conform. I wasn’t one of those government statistics that they put a tick in the box,” he says. “For me, I think there needs to be a little bit more lateral thinking.” This, in many ways is why he feels very much at home in the self-help world, because it supports an alternative way of thinking.

Education, he affirms, is important to him – but not always in the conventional sense. Bonetti is living a fascinating life that is deeply fulfilling. Able to manage his time how he wants, he is on a continuous learning track that will take him to new places.

“I’m sure the beliefs that I have today about certain aspects of life and my own life and my children’s life will change. For me it’s about continually developing as an individual and sharing that message. As I say, providing there could be one person there that’s listening, if that one person is willing to invest their time in me, then I’ll keep going, I’ll keep delivering that message.”

Having left school at 16, Benjamin served four years with the Royal Engineers travelling across the globe. He left the Army in 2003, ready to pursue his dream of owning his own business. Following a few false starts, he settled down to work at a local estate agency and went on to run his own independent estate agents, based in Worthing, West Sussex, which he sold in 2008. It was at a NLP (Neuro-linguistic programming) course in 2008 that he met the MD of NLP World, Terry Elston. Following the course Benjamin became heavily involved with NLP, leading courses and working alongside Terry himself before establishing personal development company, Empower Your Life. Team Bonetti: Supporting Benjamin every step of the way, Team Bonetti work closely together to deliver exceptional service to Benjamin’s clients. The Web, PR and Support teams, and Benjamin’s management teams form the foundations of Team Bonetti. Benjamin Bonetti also sponsors a team of models and athletes, demonstrating what an individual can achieve - not only in their fitness, but also in their well-being and health
http://www.benjaminbonetti.com