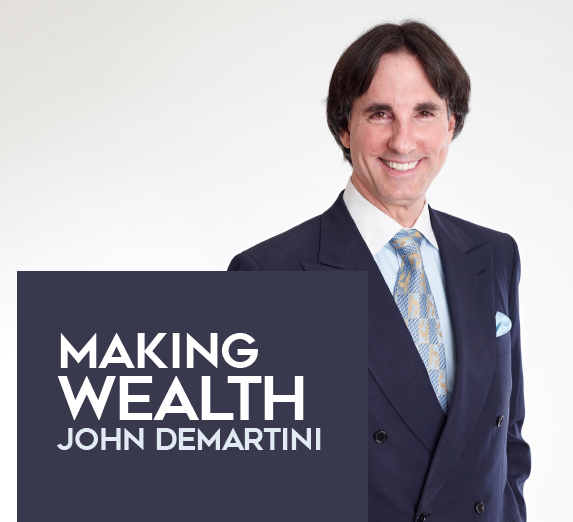 When John Demartini set himself the task 43 years ago of understanding how wealth was created, he couldn’t have foreseen how he would find the keys to wealth. At The Best You Expo 2016, he revealed the mindset of the most successful people on the planet

John Demartini is a fascinating individual with extraordinary depth of insight into wealth creation.

“I’ve been fascinated by anything that helps maximise human awareness, human potential and helps people master all areas of their life: their spiritual quest, their mental quest, their business, their finances, their relationship, their social influence, their physical health and their wellbeing,”

Focusing on wealth, he told the group how as a young man he found out about the existence of a very rare item, The Book of Wealth, by Hubert Howe Bancroft. Published in 1895-1896, only 400 copies were printed and distributed to the wealthiest individuals of the time.

Reading the book, Demartini realised how the book distilled the essences of successful wealth building from hundreds of case studies stretching back over thousands of years. And each study showed a similar template, that he summed up in three simple statements:

Demartini explained that “If you don’t have a desire to altruistically serve people and make a difference in people’s lives, you’re missing out on one of the big driving forces to build wealth and business.”

The second statement was that they felt “destined to live the highest standard, the greatest life that they could, to rise above their narcissistic component and live absolutely royally.”

This wasn’t out of narcissism, he explained. “They found out by doing so that they raised the overall standards of everyone in the society to go and push further and to reach out and do more with their life. They wanted to raise the standards because it incentivised and inspired people to do the same. It exemplified what was possible.”

“The third was that in connection to money, they had transcended conventional ideas of morality. The labels of good and bad or greed and fear, infatuation with and resentment of money. They didn’t see money as a good thing or a bad thing, they saw it as a measuring mechanism of service rendered and rewards received.”

Demartini explained that this view enabled people to bring their full passion to the endeavour. But there was also a question as to why so few people managed to make themselves great wealth. In his experience, less than one per cent had found out how to be financially independent, though many aspired to. So, what else did people need to think about?

“Most people who say they want to be financially independent, have a value system about spending money on consumables and depreciables. They want the lifestyles of the rich and famous. They don’t want to actually master the skill of investing in assets and depreciables that go up in value that begin to work for them.

“They haven’t discerned between a liability and an asset, something that’s consumable, that depreciates and something that appreciates.”

He summed up the view in a simple phrase: “Immediate gratification will cost you but long-term vision will pay.”

He explained that working patiently at the long-term vision, and not seeking the trappings of wealth before you are wealthy is central to this. Being clear that the money you should be seen as an investment, not something to spend thoughtlessly. He explained that becoming the brand is more important than being seen to wear others’ brands.

“Make sure you’re buying something that’s going to go up, that’s appreciated and desired and needed in society,” he added. That was the basis of a strong business.

This, then, comes down to your values. And if your values are pointed towards spending rather than accumulating, you will follow those values and money will slip through your fingers.

“People who work for money become its slave; people who have money work for them, become its master. Mastery over wealth is based is on your value structure.”

For those who don’t yet know how to identify those values, Demartini recommended that they go to his website doctordemartini.com and determine their values.

Having done that, don’t lose heart if your values are currently not pointed to wealth. He offered an exercise that would help to shift your values, with six questions that would require work to answer. Each one, he advised, required at least 2oo answers:

Question one:
What are the benefits to you of building a business that serves ever greater numbers of people?

Question two: Name 200 benefits of directly or indirectly managing your business. This is distinct from building it.

Question three: What would 200 benefits be of saving an ever progressive portion of the profits?

Question four: What would 200 benefits be of investing in degrees of leverage which involve reward and risk. Risk, he cautioned, is something to be handled with care. You build up a knowledge of risk and “earn the right to risk”, and it is not about gambling.

Wiser to go through and make sure you save your money and build a cushion and build a fortune in the process. I assure you that the more fortune you build, the more opportunities are going to be magnetised to you.

Name 200 benefits of actually creating a financial cause that leads to a legacy.

“If it’s only hedonistic and you just basically want an easy lifestyle and you’ll end up buying clutter, you won’t have meaning.”

He advised delegates to, “Find something that’s meaningful, that’s inspiring to you as you build your wealth, something you can’t wait for in the morning and dedicate your life to it.”

“If you start implementing those six steps,” he told us, “by writing 200 benefits each, your value of wealth building will rise up on your value list.  Once it’s up near the top, you’ll see opportunities, you’ll start making decisions, you’ll act differently. Don’t stop writing the benefits until you can see that your behaviour is wealth-oriented.”

That, then, is the starting point for wealth.