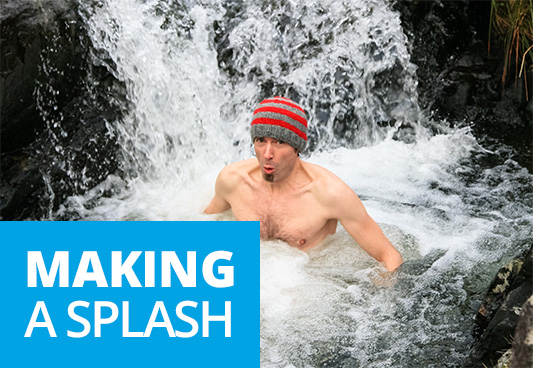 Outdoor swimming has grown from an underground movement to a mainstream activity. Writer Andrew Fusek Peters says it also provided part of his recovery from depression

As I child, I swam across the Thames at Wargrave. The water-weeds waving underneath my feet gave me a pleasurable shiver, even though I was told about the man who dived in straight after lunch, got cramp, tangled up in the weeds and drowned. But for me, such excursions were more than mere frisson. Who knew what country lay beyond the far river bank? And how delightful in Suffolk to swim the crazy fast currents of the river Ore, let the flow sweep me and my brother down towards the sea. Even better, was Zelena Voda, the green lake in Slovakia, where august stole the water’s chill and play was a day-long affair. We did not call it wild swimming then. I married a Shropshire lass and moved to this county of mynd and bach, of waterfalls, lakes and high rivers full of clean trout-tickling flow. In the waterfall at Berriew, you could jump from the edge of a neighbour’s garden into deep, black peaty water, a proper mad dive-bomb. And there were days dawdling high on the ancient drover’s paths, lolloping about in the equivalent of an infinity pool that looked down to the vales of Montgomeryshire and the far Breiddon hills. Strange that such a crater was formed by leftover German bombs, dropped after the Liverpool raids in WWII. Water will always have its way in the end                                                                                                                                            I made a life here, wrote books, raised children. Until 2010 when the pressure of work grew intense. There was also, still, the unresolved grief for my father who killed himself when I was a toddler. I fought valiantly on, continued with the fantasy series I had been commissioned to write by the editor who signed J.K.Rowling. So many words, so little sleep. I remember the last swim before depression fixed me to dry land. It was late September and the village applepressing had produced a good twenty bottles of golden summer. Though the air was crisp and apple-sharp, the light was russet, inviting my son and a good friend to go to the river at Clunbury.                                                                   At that very spot, on a bend in the Clun where the tree-swing still stands, I had earlier in the year seen something large jump out of the water as I gingerly stepped in. It was an otter, the great roving fish-hunter, who can map out 25 miles in a single night. We swam that day, a cold deliciousness, though my heart was filled with beating anxiety. I was not to know that two weeks later I would be in a psychiatric unit. Nor could I anticipate how all love of outdoors, of dipping, of shock, of seizing the moment would be stolen from me. The changeling left behind could only shiver on the sofa, refuse to answer emails, the phone, the door, life. I wanted to go where my father did, despite the evidence of all good and healthy things – wife, kids, love, support, friends. Six months, two psychiatric units, the crisis team who came to take me for walks, my weeping wife, my puzzled children. All of it, a fearful fog. What happened? A mix really – time, counselling, right medication, love, support, waking up and of course, water. A day in early April, back up at that very same bomb-bashed in lake. I am out with daughter and son, which is a miracle in itself. I find I can talk again, make jokes, feel feelings. Even stranger, despite the gnashing bite of breeze, the delayed spring, I feel a sudden urge to strip and check out the gleaming surface of Pant Glas. Why not? That was always the core of wild swimming for me. No season, nor time of day or night, nor temperature can answer the very simple question. Why not, indeed. There are no rules in this moment, where I go with an old instinct. My feet as they sink into freezing mud warn me that this is out-there bonkers. But having been bonkers, this is nowhere near. I dive, come up screaming, swearing for sheer joy. My kids have heard it all before and are unimpressed as only teenagers can be. I don’t care. I feel that glow of glad, that infusion as I hare back to shore filled with new breath, the aliveness of this afternoon. The view to the valley is sharper, the air cleaner, the day begun again as it is each time I swim outside. This is not cure, but it is heal balm and I highly recommend it.

(biog – pix and book jacket) Andrew Fusek Peters (andrewfusekpeters.com) is an author and photographer. His books include the wild swimming memoir, Dip. His next title, In Wilderness Is Paradise Now, Shropshire Words and Wildlife, will be published in 2016.

THREE TO READ: Inspired to take the plunge? Read these books to discover the power of outdoor swimming.

3. Wild Swimming by Daniel Start MORE ICON: Download The Best You app at thebestyou.co to discover the best places to swim outdoors.