Love (and life) is like a butterfly by Miranda Leslau

Home Love (and life) is like a butterfly by Miranda Leslau 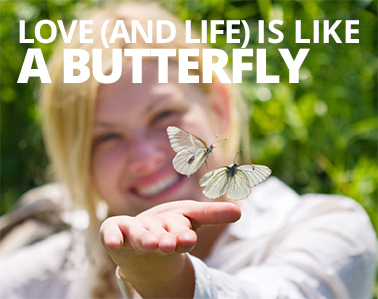 It’s 2014, and the butterfly has once again become an important symbol for me. Throughout 2013, I had been experiencing terrible health problems, going back and forth to the doctor in a truly desperate state. One of my two rescue dogs, JJ, would lie on my legs all night just to stop them from burning. It was around the same time that JJ kept licking the left-hand side of my neck. He wouldn’t leave it alone. In October 2013, I ran my third half marathon, and while I will never be a fast runner, normally, I just keep going, regardless. This run was different.

Within five minutes of the start of the race, I had the most agonising pain in my groin. My first thought was of my late father, whose secondary liver cancer had presented itself with this very symptom. I knew something was wrong.

With all of my nonsensical symptoms, I ended up in a neurologist’s office who thought I had MS. He did a lumbar puncture and artery function ultrasound and it was during the artery function test that they found a lump.

This lump turned out to be papillary cancer, and it had been there for over a year. My life changed and everything that preceded this discovery was now BC (Before Cancer). Everyone and their dog became a Google doctor. From being told “It’s the best cancer to have” to “I’d rather have cancer than Parkinson’s any day of the week” to others telling me how scared they were, my brain shut out all of the white noise.

Some people surprised and amazed me; others disgusted me. Which says more about them than it does about me, so I won’t waste energy dwelling on it. But worst of all, all I wanted was my mum and dad to tell me everything was going to be okay.

Within two weeks of being diagnosed I had my thyroid removed in a complicated operation where my vocal cords were damaged and I was left with a 40 pc airway. I have a voice. I was told I needed two years of speech therapy. I gave up after six weeks and took to boxing and swimming. Give my body a shock into fight or flight, was the mind-set and I am a ‘miracle of science’. Like the butterfly.

I could see people recoil as I told them I had cancer. It was as if they were expecting me to be dead by the end of the week or that I would be bald within a matter of days. The other end of the spectrum was people sharing their own story of cancer, a ‘competition of tragedy’. This is not a battle. A battle implies one side is stronger.

As a past client of mine, T. Harv Eker, always says “How you do anything is how you do everything”. I just get on with it, always have, always will. Every ounce of energy is conserved for what is essential to life management. Nothing else really matters, other than my dogs, who need me. Perhaps one day I will be a victim. We’ll cross that bridge when it is built.

Six weeks after my operation, I received radio-iodine treatment. Only thyroid cancer responds to this particular type of treatment and for me, it was agony and I am still a work in progress.

My life is now lived in a very small bubble. With a few important people around who make me feel normal and just ‘myself’ with no drama or fuss, I am able to cope. Work is normality, so it is a very important part of my needs.

Until after my next treatment and a full body scan, I won’t know whether cancer remains in my body. I just take one take day at a time. This is all we can all do in life, regardless of whether we have a disease or not. With the current chaos around the world, who knows what will happen to us.

I have learnt a lot about life and myself since I was diagnosed. I am extremely strong and focused. I worry less and keep away from drama. I am actually happier and more contented than I ever have been, which is ironic.

In my experience, love and life really are like a butterfly. They come into your world as a miracle. They can disappear just as fast as they flutter in and they should make you appreciate the simple gift called life. Life and love are delicate, they need handling with care and you never know how long they will hover around.

A white butterfly was there again today as I read an article about The Fault In Our Stars and the real life character that inspired John Green to write this utterly breathless work. The white butterfly was hovering over the article in the shadows and then it was gone. And as for my mum, in heaven she can always be the everlasting butterfly she related to. My only request is that she hovers around during the next chapter in my journey.