Phil Jackson is the Lord of the Rings

Home Phil Jackson is the Lord of the Rings 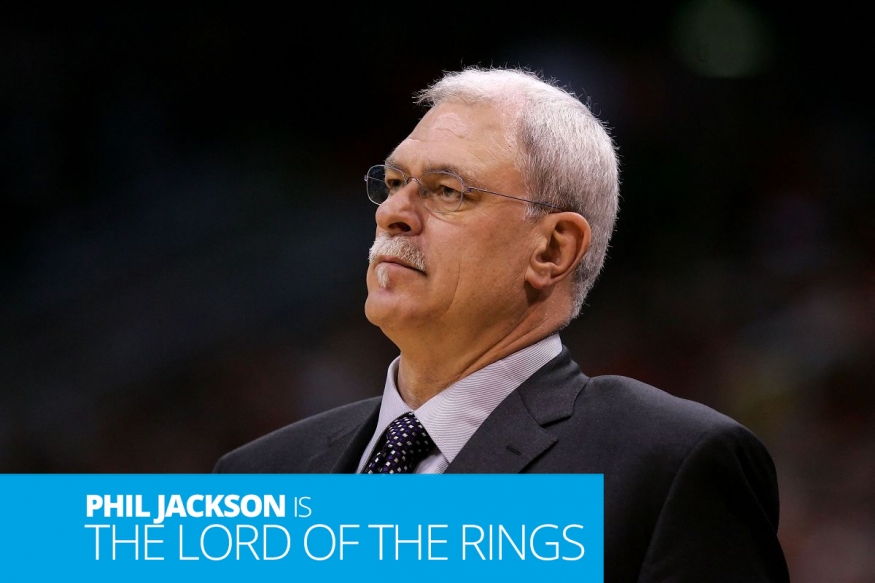 It might be unusual to think of an international sports coach for one of the world’s most successful basketball teams as spiritual, but that is exactly the case for Phil Jackson.

As the coach for the Chicago Bulls and the Los Angeles Lakers during the period of both teams’ apparent invincibility, there’s no doubt Jackson brought a unique and highly effective approach to both teams. His role wasn’t only to think about on-court strategy, but also to work with the personalities of some of the highest powered sportsmen in the game, including Michael Jordan, Shaquille O’Neal and Kobe Bryant.

It’s a rare skill to combine game strategist and psychologist, but that’s exactly what enabled Jackson to take his teams to “11 rings” – or 11 NBA championships.

Jackson makes no bones about his belief that the game of basketball is as much a spiritual discipline as a physical sport. As he puts it:

“Transforming a group of young, ambitious individuals into an integrated championship team is not a mechanistic process. It’s a mysterious juggling act that requires not only a thorough knowledge of the time-honored laws of the game, but also an open heart, a clear mind, and a deep curiosity about the ways of the human spirit.”

He often speaks about the game using spiritual metaphors. Jackson notes that winning a “ring” is the symbol of status and power in the NBA, but it is something more than this as well:
“On a psychological level, the ring symbolises something profound: the quest of the self to find harmony, connection, and wholeness. In Native American culture, for instance, the unifying power of the circle was so meaningful that whole nations were conceived as a series of interconnected rings (or hoops). The tepee was a ring, as were the campfire, the village, and the layout of the nation itself – circles within circles, having no beginning or end.”

It’s not the language normally associated with the high-adrenaline world of basketball.
Jackson could easily have turned away from spirituality. Born in Deer Lodge, Montana in 1945, he was raised by parents, both of them evangelical ministers, who wanted their children to follow in their footsteps. Like his two brothers and half-sister, Phil found the life they offered in the remote part of Montana where they grew up smothering.His mother, he recalls, was an old-fashioned fire-and-brimstone preacher, while his father was more the man connected with others. While they had a large and extended group of people around them – a definite positive for someone who would need to handle all sorts of different personalities in the context of the baseball coach – their austere religious beliefs were, Jackson felt, deeply oppressive.

There was no real relaxation time. Phil’s mother, who believed idle thoughts to be the Devil’s playground, endeavoured to fill every minute of the family’s life with devotion to God. Hence ,no television, no radio, no comics, no dancing, and no socialising with friends at the local canteen. On Sundays, he would go to church twice – once in the morning to hear his father preach and again in the evening to hear his mother.
Childhood was not fun. Jackson later said he is convinced that the unconscious is at its most creative when the mind is allowed to relax, run free, and find its own way around a problem. That often means sitting and doing nothing – something his mother could not abide. By his teens, Jackson was driving his energies into sports. His brother Chuck suggests that sport was the only activity in which the Jackson children could be involved that allowed them to do the same things as other kids.

Spotted by talent scouts at high school, Jackson was taken on by the New York Knicks after university, and went on to become a well-liked player who played on two NBA championship winning teams between 1967 and 1980.

Jackson’s world view developed all this time. Having been raised on a literal reading of the Bible, his mind was opened at college to other possibilities. He changed his degree from Political Science
to a combined degree in Philosophy, Psychology and Religion. He was drawn to Buddhism, Eastern and Western religions, and he began to put his own experiences in perspective. He recalls overcoming his problems with religion a few years after becoming an NBA player.
“One summer in Montana, I recruited a neighbour, Ron Fetveit, who was an observant Christian, to help me fix my leaky roof. While we were repairing shingles, we got into a long conversation about spiritual matters, and I confessed that I had a difficult time relating to his faith because of my childhood experience. ‘I know where you’re coming from,’ he said, ‘but you know, there is no such thing as a grandchild of God. You are not your parents. You need to develop your own personal relationship with God.'”

Phil took up meditation, t’ai chi and yoga, learning to still the mind and become more focussed. He also
became fascinated with Native American spritual practice. After retiring from playing and taking various coaching jobs, Jackson was hired as assistant coach for the Chicago Bulls, eventually graduating to head coach. It was here that he brought together his experiences of spirit and of the practicalities of the game to weld together a winning team.

Heavily influenced by the The Triangle Offense, the game play taught to the Bulls by assistant coach Tex Winter, Jackson sought to adapt it to become fluid reactive rather than reducing it to a series of set plays. To bind the team together, he introduced meditation sessions before practice. He even had the
team playing in total darkness to make them more aware of what was going on around them. His aim was to mould the team into something more than a collection of individuals, and he was inspired by the groundbreaking book, Tribal Leadership, by Dave Logan, John King, and Halee Fischer-Wright. The book lays out five stages of tribal development, from collective negative view of the world, through levels of self-belief and ego to a final “rare stage characterised by a sense of innocent wonder and the
strong belief that ‘life is great.'” In practice, this meant getting the team to see the bigger picture and to appreciate that there are times that the ego of the individual is less important than his role in the group – a tough lesson for young men brought up in the United States in the late 20th Century to take on board.

Jackson found part of the way to do this was through recourse to Native American culture, such as showing them the television series The Way of the Warrior in order to look at how other cultures solved problems.
For the same reasons he would invite different speakers to address the team. Guests included a nutritionist, an undercover detective, and a prison warden, all of whom showed the team new ways of thinking about difficult problems
Over time, he had his successes. Michael Jordan, a player with extraordinary personal ability, learned to become a better player by allowing others in the team to shine. The same is true of the struggles Jackson had with Kobe Bryant and Shaquille O’Neal when he moved to the LA Lakers. Though a tougher journey in many ways, Jackson persevered and succeeded in welding together a team from a group of very strong, and often rival, egos.

Throughout his career, Jackson has studied the individuals he coached closely to identify what personal skills they lacked in order to make them more rounded, mature individuals. For some this meant giving them clear direction, while for others it was a matter of standing back and allowing them to find their own way.
As part of that development plan, each summer he would give team members their own personalised reading matter. For one it might be Zen and the Art of Motorcyle Maintenance, for another it was Way of the Peaceful Warrior, while for a third it would be Beavis and Butthead: This Book Sucks. Many times Jackson had to be mindful of his own behaviour, learning how to stay focussed on the things that animate him while letting anger and negative thoughts go. At the same time, he has recognised that anger itself is a useful energy provided

it can be harnessed effectively. He sought consistently in his 30 years as a coach to apply Buddhist techniques and principles to the sport that he thinks of as far more than a game.
The results of what appear to be such unconventional approaches speak for themselves. Jackson, with 11 NBA Championships to his credit, is regarded as one of the top 10 greatest basketball coaches of all time. He won the respect of his players and, with each of his championship teams, he moulded an assortment of individuals into a united, indomitable force. As such, his life’s work is well worth studying and learning from.