Live Your Dreams by Christine Meerman-Cooper 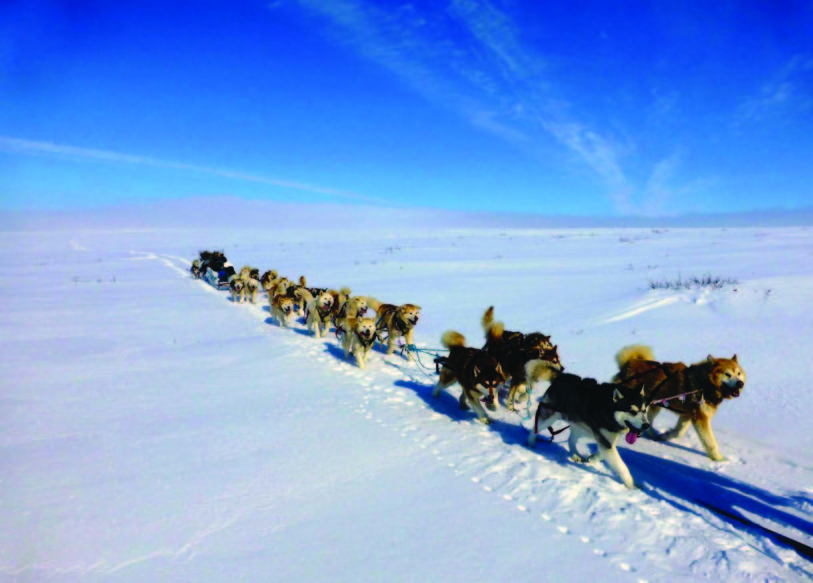 Self-belief is an extraordinary thing. Christine Meerman-Cooper believes that, with the right motivation, attitude and support, anything is possible. Earlier this year she took on the hardest challenge of her life – a 12-day Arctic expedition into the Brooks Range, Alaska.

As a child I dreamt of visiting Alaska one day. That dream came true in April 2014 when I headed out to the 19-million-acre Arctic National Wildlife Refuge on an Arctic expedition with pioneering musher Joe “Malamute Man” Henderson and his team of 22 Alaskan Malamutes.

We journeyed 120 miles across the northern side of the Brooks Range over twelve days, mostly cross country skiing, in some of the most remote areas of the Arctic. I undertook this expedition as an extreme sponsored trek to raise funds and awareness for Malamute Matters, which helps rescue dogs, and Friends of OSCAR, which supports the families of children diagnosed with brain and spinal tumours.

Joe Henderson is something of a legend in the global mushing community, so when Joe posted a status inviting applications for a lucky few to join him on his 2014 expedition, I decided to take a chance and applied.

As Trustee of Malamute Matters and an owner of two wonderful Alaskan Malamutes Matters, I wanted to join this expedition to experience firsthand a taste of the life that these dogs had originally been bred for and also to highlight the plight that Malamutes now face.

A couple of months before I was due to set off for the Arctic, I became aware of a charity called Friends of OSCAR. My father, whose sense of adventure inspired my taking on this challenge, had suffered from a brain tumour at the age of twelve. Fortunately, he made a full recovery, but he was one of the lucky ones. I knew immediately that I had to do what I could to try and help Friends of OSCAR.

Having never been athletic in any shape or form previously, I had to work extremely hard to train for the expedition, focusing on developing my strength and endurance. I knew it was imperative that I stop smoking, so I made a New Year’s resolution to switch to E-Lites electronic cigarettes and I contacted E-Lites to tell them I was using their products to help me prepare for my expedition. It was the best move I made: E-Lites became my main partners and sponsors in the expedition and helped make my dream come true as part of their Believe You Can campaign. I believed that I could do this, so they in turn believed in me and supported me.

My mallies, Lila and Rumo, were my unflagging training companions. Together, we ran, jogged, hiked, and backpacked all over Scotland.

I never took a single day off, and I never gave up, no matter how sore or how tired I was. I was no longer afraid of facing the Arctic. How much harder could it be than what I was putting myself through now?

The expedition was physically and mentally demanding. Each morning, the frost, snow and ice would be inside my tent. Every day, we had to dismantle our tents and load the sleds before setting off cross country skiing across the frozen tundra for usually five or six hours until we reached a suitable spot to set up camp.

Each evening the focus was on relaxing and cooking dinner, which alternated between protein-heavy meals of fresh meat and vegetables or instant meals that had to be rehydrated with melted snow. I ate constantly (I must have consumed around 10,000 calories a day), yet I still lost weight.

Our focus was survival: food and firewood were our main priorities. But we also had a lot of fun, toasting marshmallows and cooking popcorn on open campfires, practising shooting targets with the rifles we carried with us in case of close encounters with bears, fussing over the dogs, discussing the day’s experiences and swapping stories from back home.

We only ever spotted a few ptarmigan, but we knew wolves were not far behind us for much of the journey. We never saw them; their tracks in the snow were all that alerted us to their presence. One night, I heard a wolf softly howl in the distance, and all the Malamutes answered the call, howling back in chorus.

For an animal lover and nature enthusiast, and particularly a Malamute owner, this expedition truly was the experience of a lifetime. I shall carry with me always the memories of this magical trip.

If this challenge has taught me anything it is to live life by the Malamute mantra: Never give up. I never gave up on my dream, and I will never give up trying to help those I care about.