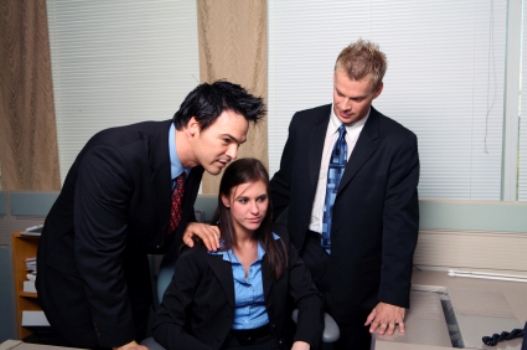 Each time in my career that I have ignored sexual harassment aimed at me, I have moved up the corporate ladder. For example, the boss who once pulled all senior management out of the company’s sexual harassment seminar because he thought it was a waste of time — and patted me on the butt as he left the room — has turned out to be my most reliable cheerleader (and a very impressive reference).

In my first eight days of my job at a financial software company, I was sexually harassed six times by my new boss. This list does not include his sexual harassment of me during the interview process, which I chose to ignore, since it was my first interview at a respectable company in six months.

Maybe you’re wondering what, exactly, I regard as sexual harassment. The easiest conversation to relay is this one:

Me: “Thank you for setting up that meeting; it will be very helpful.”

Boss: “Big testicles.” (He then pretends to squeeze his genitals.)

I had no idea what he meant by this comment, but it is short and easy to relay to make my case.

Here are some other choice moments:

When he took me out for lunch on my second day on the job, he told me he once fell in love with a woman as tall as I am but was intimidated by her height, so they just had casual sex. I said nothing in response.

But I knew, from a legal perspective (and also a moral one) that I needed to tell him his comments were unwanted. So that afternoon when he said, “I want to hug you, but it would be illegal,” I said, “You’re right.”

Each night, I relayed some of the best lines from work to my husband. He was stunned. He couldn’t believe these events actually happened in today’s workplaces. I told him this was standard. He told me I should sue so that we could go to Tahiti. I told him I’d probably settle out of court after three years for about $200,000, and I’d be a pariah in the workplace.

I told my husband that his very hot, 27-year-old boss gets hit on as much as I do. He said he saw her at work all the time and this never happened. I told him that OF COURSE men don’t harass women in front of other men. After all, it’s illegal. Men are not stupid. But I suggested to my husband he was perpetuating the myth that harassment isn’t widespread.

In fact, 44% of women between ages 35 and 49 report experiencing sexual harassment at the workplace — even though almost every company has an explicit, no-tolerance policy. A national survey shows that 21% of all women report being sexually harassed at work, while a Rutger’s University study indicates that for knowledge-based workers, the percentage can go as high as 88%. Yet when women leverage the no-tolerance policy their names are plastered over the business pages, and they are blacklisted in their industry.

So the best way to change corporate America is to gain power and then wield it. To get power, you have to stay in the workforce, not the court system, and work your way up. Unfortunately, this means learning how to navigate a boys’ club. But when you know the system, you then are clear about the root of its problems, and you know how to initiate change.

In this spirit, I hatched a plan to rid myself of my harassing boss. Originally, I took a job in business development, even though I hated selling to clients, because it was the only place with an opening. I told myself that the members of the management team were so smart that I would learn to love sales from them. After weeks of harassment, though, I thought management was so smart that if I explained why I wanted to be moved to another department, they would see my request as extremely reasonable. I figured they would be grateful for my low-key approach to this sensitive problem, rather than resentful that I had been hired to work in biz dev and then asked to be switched to a department with no openings.

I was right. I was moved into marketing, which I prefer. I received a more prestigious assignment and gained a smarter boss. Had I reported that I had been sexually harassed during the interview process I would not have gotten the job. Had I reported the harassment to my boss’s boss without presenting a plan for solving the problem, I would not have received a better assignment. In fact, if you have a strategy, enduring sexual harassment can be a way to gain power to achieve your long-range goals.

Epilogue: Eventually, my boss was fired. Officially for low performance, though I have always fantasized that it was for rampant harassment.