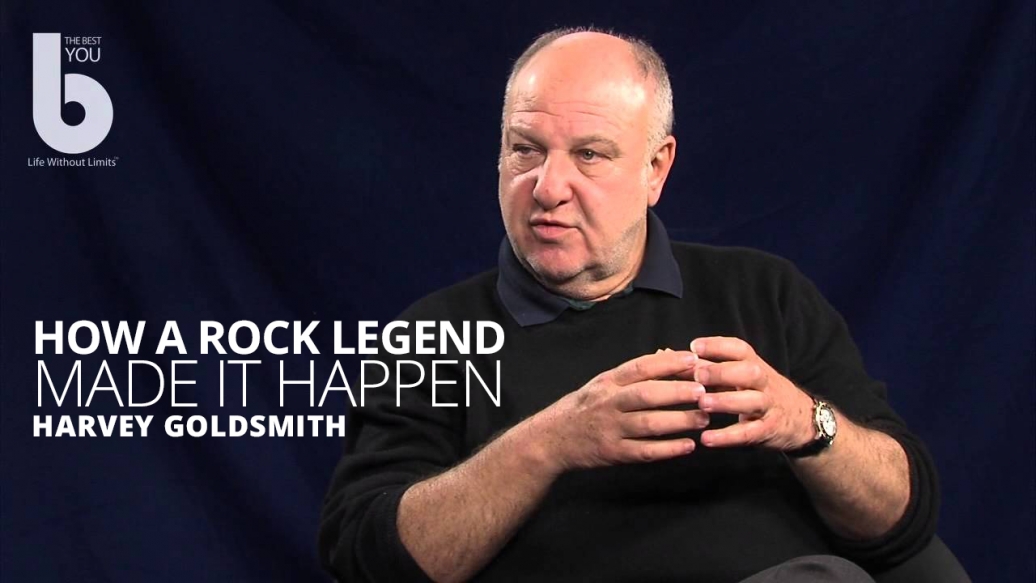 When Harvey Goldsmith was growing up, his house was awash with music. But he puts his ability to organise some of the most impressive musical events of the last 50 years down to being in the Scouts!

“We used to go to camp and we were trained how to look after people, to think about security, to look at first aid, your responsibilities and the things you had to do. My thought process came from that early training,” recalling how he would make copious lists of all the things that could go wrong to pre-empt them. So, woggles and uniforms were the unlikely influence behind one of the world’s greatest rock band promoters.

It all started early for Harvey. At University in Brighton he took over the Student Union canteen on Friday night and ran his own club. “Within about a month,” he says, “you couldn’t get in.” He realised there was a real need for live entertainment.

Within a short time Harvey was booking bands at 12 universities in the South, had promoted the young Eric Clapton and had his own club in Brighton. Then as an exchange student he did a Greyhound bus road-trip around the US. On the way he won $900 in a casino in Las Vegas, befriended The Grateful Dead in San Francisco and arranged to sell posters in Europe for the rival Avalon and Fillmore clubs.
“The artwork was amazing,” he says. These early experiences are great examples of his flexible and entrepreneurial mindset. He clearly sees
opportunities and follows his instincts. From his early years of promoting Eric Clapton, clubbing, hanging out with The Grateful Dead through to organising tours for the likes of Manfred Mann and The New Seekers, he has simply been willing to go for it.

The list of his achievements in the world of rock music, include organising the massive Live Aid concert in 1985 which raised £116 million for the starving in Africa and the later Live 8 concert in 2005 that saw rock music played on TV across the world for 17 hours.
So how did he build such mega success?

What stands out is Harvey’s brilliant skill at networking. “Most people when they grow up stay within their peer group. I used to flit from one group to another and befriended a number of groups. I don’t know why, but I just did. I kind of enjoyed it.”

Enjoyment rather than money is at the heart of his motivation. “I never really thought about the money,” he says. “My theory was that if I picked the right act, put on a great event, sold the tickets, it’s going to work and at the end of the day… Money was never ever my prime mover.”

He also learned from his own and others’ mistakes. When he was young he attended an overpriced Ray Charles gig in which Ray Charles appeared for only 35 minutes. He angrily left, promising himself never to let that happen again. “So, I learnt how to look after people,” he says. He was also prepared to take risks. “I had a good eye and ear for talent and the other thing that I was prepared to do was to be where the buck stopped.” When he got something wrong, he would always admit it.

“And then, when you come to the show, you have to make sure the audience is having as good a time as they expect, if not more. Because they’re the ones paying for everything and if you don’t take care of that audience… you’re not doing your job properly.” So, what is his advice to those wanting to follow in his footsteps?
“First of all, if you want to be in the entertainment business do some research. Do you want to be a PR guy, a roadie, a tour manager, in A and R? Whether it’s general management, finance, agency, managing – think about what interests you.”

Some of Harvey’s honours and awards

• International Music Person of The Year for his outstanding contributions to the Music Industry at the MUSEXPO by the City of West Hollywood.
• Honorary Fellowship from Ravensbourne, the university sector college innovating in digital media and design in September 2011.
• Lord Mayor of London gave him Freedom of The City in November 2011.
• July 2012, The University of Brighton presented Harvey with an Honorary Degree of Doctor of Arts.
• A Diamond Jubilee Award by HM The Queen for his contribution to The Arts.