King of the world – Leonardo DiCaprio 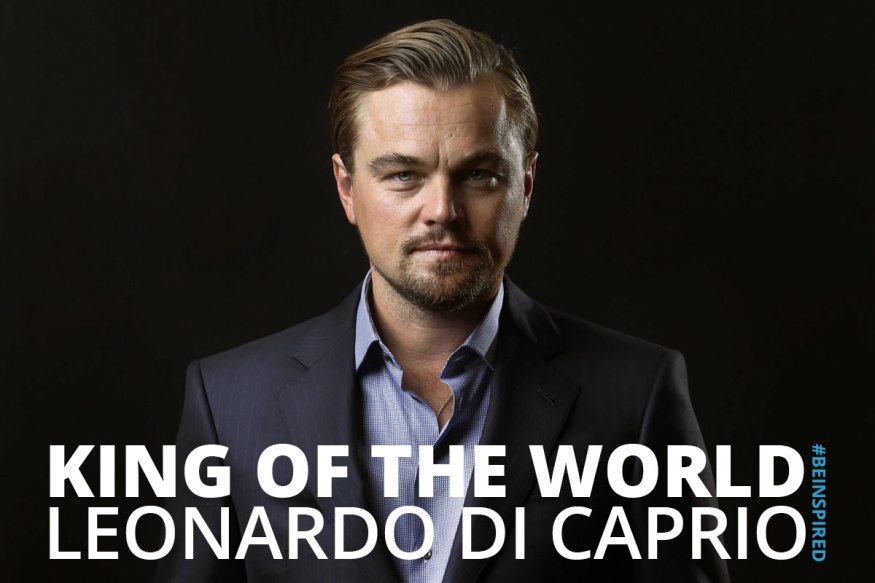 With his latest movie, The Wolf Of Wall Street, shocking and impressing in cinemas worldwide, The Best You looks at the titanic phenomenon that is Leonardo Di Caprio.

Perhaps Leonardo DiCaprio was always destined to be involved with the arts. The first time his mother Irmelin felt him kick in her womb, she was looking at a painting by Leonardo Da Vinci. She was in Italy at the time, in a last ditch attempt to save her marriage to George DiCaprio.

George was a member of the New York counterculture hippy scene. A comic book artist, he had produced a comic with his ex-girlfriend Laurie Anderson, who was to go on to become a world-renowned performance artist. He was friends with Velvet Underground guitarist Sterling Morrison, LSD guru Dr Timothy Leary (once described by President Nixon as “the most dangerous man in America”), Beat poet Allen Ginsberg, and cartoonist Robert Crumb. His unconventional influence was to have a lasting effect on his son.

Before Leonardo was born, his parents moved to Hollywood seeking success, but

landed in one of its poorest districts, living next to a store called Le Sex Shoppe.

Just as Leonardo came into the world in 1974, their marriage finally fell apart. Determined to keep the paternal connection despite their personal estrangement, the ex-couple moved into houses next to each other with a shared garden. Soon George DiCaprio’s new love interest, Peggy Farrar, moved in with him, too. This non-standard living arrangement worked with surprisingly little friction and Leonardo grew up thinking of Peggy’s son Adam as his older brother.

Growing up in “Syringe Alley”, an area notorious for drug-taking and prostitution, was tough for Leonardo. Between meeting syringe-carrying junkies in the park and seeing men having homosexual sex in the street, DiCaprio’s early life was far from sheltered. He recalls seeing his dad and friends smoking marijuana as regularly as others drank beer. But it had a lasting positive effect. From early on Leonardo questioned the standard, “normal” way of doing things and realised it wasn’t necessarily best. Perhaps some of Dicaprio’s unconventional search for challenging, unusual films in later life comes from his dad’s counterculture upbringing.

His mother’s support for him was strongly practical. Keen to get Leonardo away from the local “Scumsville” schools, she would drive three hours a day to deliver him to the Centre for Enriched Studies, where he loved to act. He’d discovered a joy in entertaining others at the age of two, when he climbed unasked onstage at a show and danced for a delighted audience.

Inspired by his stepbrother’s decision to act in TV commercials, Leonardo followed suit, doing a series of adverts and educational films from the age of 14. Realising he was being paid to do something he really enjoyed was a major turning point for him and he dedicated himself to acting to escape his impoverished background.

Things weren’t easy, though. After some initial success, he couldn’t find work for a year and a half. In response to his frustration his dad stepped in to reassure him, “One day it will happen for you. Just relax.”

He was right. Eventually, DiCaprio managed to impress, landing a part in a straight-to-video movie, Critters 3.

His breakthrough came when he auditioned in front of Robert De Niro, hoping to play the lead in This Boy’s Life, a film that would star De Niro and Ellen Barkin.

With 400 rivals auditioning for the part, DiCaprio realised he had to impress. He walked into the audition and unexpectedly screamed “Noooo” at DeNiro, who burst out laughing at his gutsiness. So, DiCaprio’s first “real” movie had him co-starring with screen legend Robert De Niro.

If that audition showed his willingness to be unconventional, his next film revealed his dedication and close observational skills in his role as the autistic Arnie Grape in the 1993 movie What’s Eating Gilbert Grape?

“I had to really research and get into the mind of somebody with a disability like that,” he recalls. “So I spent a few days at a home for mentally retarded teens. We just talked and I watched their mannerisms. People have these expectations that mentally retarded children are really crazy, but it’s not so. It’s refreshing to see them because everything’s so new to them.”

His performance was extraordinary. He was just 18 years old when he received his first Academy Award nomination for Best Supporting Actor.

A slew of reasonably successful movies followed, which cemented DiCaprio’s reputation as a powerful newcomer. But inevitably a flop came, in the form of the biopic Total Eclipse about the life of French poet Arthur Rimbaud. His response revealed a mindset that was able to look at the bigger picture and not be crushed by the critics:

“I’m proud of my work in all the movies I’ve done,” he said in interview. “In a few years’ time no one will remember the bad reviews; those films will be seen as part of the body of my work.”

This glitch in his career aside, soon two movies were to change his life forever – Romeo & Juliet and Titanic, films which transformed him into a screen heart-throb and sex symbol of stellar proportions.

Romeo & Juliet established DiCaprio as a romantic and tragic lead, and the mostly teen-female public was hungry to fall in love with DiCaprio all over again.

Titanic provided that chance. A massive hit, it was the first film in history to gross over US $1 billion, a success to which there is no doubt DiCaprio contributed hugely.

What followed was a phenomenon dubbed “Leomania” by the Press. Girls interviewed outside cinemas claimed to have watched Titanic “40 times”, he was mobbed in the streets, had to cancel engagements for fear of public order problems and – while waiting in Charles De Gaulle airport, Paris – a 14-year-old fan attached herself to his leg and clung on for dear life, weeping and screaming before being gently prised off.

So what contributed to DiCaprio’s extraordinary rise to fame?

Great films that suited his acting?

Yes, these are true. But at the centre of his success is his brilliance and dedication as an actor. As Randall Wallace, director of The Man In The Iron Mask, his next film after Titanic was to say:

“He’s a tremendously instinctive actor and also an intelligent actor, which is a fantastic combination. And he’s also smart enough not to let his intelligence overwhelm his instincts. Whatever he decides to do… he will do well.”

DiCaprio also likes to keep his public guessing. After Titanic, he could have made a series of romantic movies that cashed in on his reputation as a heartthrob, but he deliberately avoided the obvious choices. The Man In The Iron Mask is a world away from the romantic leads of Romeo and Titanic.

The movies that followed are each uniquely different. His own production, The Aviator, telling the story of multi-millionaire recluse Howard Hughes differs completely from works such as Catch Me If You Can, Blood Diamond and his latest, The Wolf of Wall Street. Yet all show him mastering the roles he plays – each with dedication, depth and brilliance. His ability to surprise, to change and never grow stale has kept DiCaprio at the top of his profession for the last 15 years.

It’s also true that Leonardo thinks long and hard about his films, and he likes to provoke. When asked about Blood Diamond, he once said:

“It’s important for me to do movies that spark a debate. But they’re hard to find and they don’t always have a director I would love to work with. I love doing movies like Body of Lies or Blood Diamond because when you are dealing with issues the world is facing, you get that much more excited.”

As a professional, DiCaprio is to be greatly admired. He is also deeply private, rarely giving interviews. Some reports say he has tried to keep himself grounded while others say he was the wild man about town in his twenties and early thirties. His romantic life has been chaotic and unsettled, and though his name has been connected with some of the world’s most beautiful women, including Naomi Campbell, Gisele Bundchen and Kristen Zang, he hasn’t as yet settled down, though he has talked about family often in interviews. Perhaps this uncertainty is another legacy of his unconventional upbringing.

As time goes by his other interests have become more prominent. He is regarded as being responsible for the “greening” of Hollywood and has given impassioned speeches for environmental causes. He started the Leonardo DiCaprio Foundation “dedicated to protecting Earth’s last wild places and fostering a harmonious relationship between humanity and the natural world”, and has raised tens of millions of dollars for global conservation.

In environmental terms he has a sense of what his legacy will be:

“The one thing that I would love is to never become cynical about the things I think are really important, like family, like the environment. What I want is to be known as someone who stood for something.”

Of his acting, the great actress Meryl Streep says:

“Leo is possessed of the wild gene – unpredictability – which makes his career seem to defy categorisation, his life careers along the cliff edge, and his work is vivid and bright and exciting.”

It is a compelling combination that looks set to go on for many years to come.

Leonardo DiCaprio at a Glance