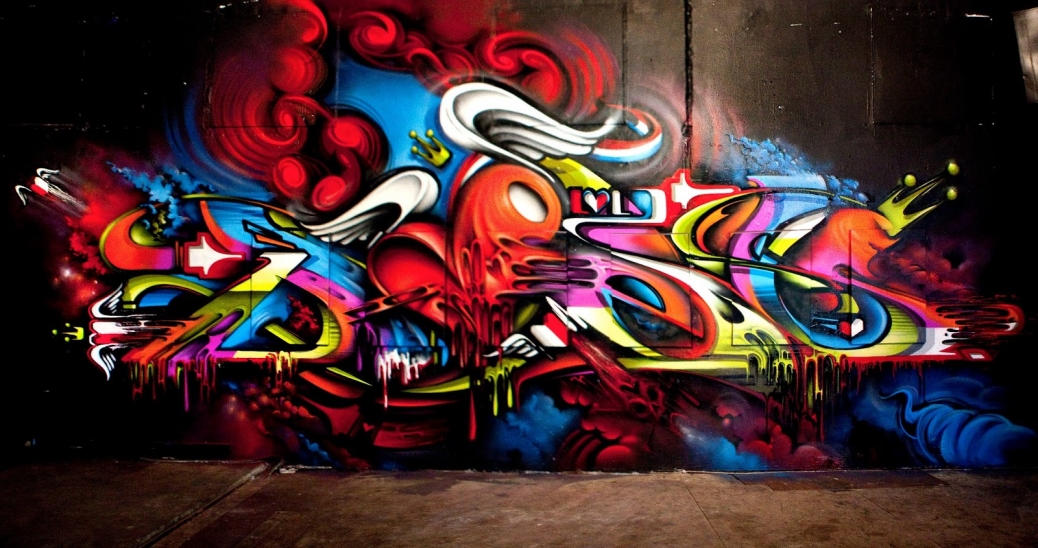 There are many reasons why Rustum Carelse started writing graffiti. Most can be attributed to juvenile curiosity. As a teenager, seeing pieces on the highway intrigued him, and he wanted to know the story and techniques behind them.

To this day I’m still not completely sure why I write. Part rebellion, part self-expression, without rules or regard for public or private property. I realise the immature nature of this impulse, but the powerful feeling of ultimate freedom cannot be underestimated.

For most writers, especially bombers, graffiti is the pinnacle of their egos and bravado. They thrive on respect and recognition for productivity, work ethic, style and painting in difficult, dangerous and obscure locations (trains especially). All the while remaining relatively anonymous outside of the small underground community of other writers, it’s a strange mix of fame and anonymity.

Street art is a complex topic for most people, especially graffiti writers. On the one hand, I have to respect getting up as it involves many of the same risks graffiti does. Some of their concepts are original and well thought out. On the other hand, one of the hardest things to learn as a graffiti artist – and one that is rarely mastered – is full command of the aerosol can (can control). Yet most street artists arm themselves with pre-made wheatpaste posters or stencils which require little to no ability or technique to execute. There are a few exceptions to this, such as 10 metre high wheatpasted posters and multi-layered stencils.

When you work on perfecting your craft for many years and maintaining a consistent work ethic it is frustrating to watch a trend emerge overnight based on easily and (mostly) badly executed stencils, affecting global opinions on graffiti as a whole and altering the landscape in which you operate.

As with most art movements, there are the pioneers of street art (Blek le Rat, Banksy, etc), and there are the imitators, following trends for cheap fame. While I have no problem with Banksy or his work, I do have a problem with the masses of imitations he has spawned. This is more an issue with global art trends and the effects of mass media than anything about street itself.

I can understand the appeal of street art to people who have had little exposure to it before. The imagery is simple, powerful and sometimes humorous, often with a powerful political message. This has, however, led to unfair criticism of more traditional graffiti, as it lacks a “message”. This is due to a lack of understanding about the differences between the two. People tend to lump graffiti and street art together. This is tricky, because while there are obvious similarities, there are fundamental differences.

Graffiti, unlike street art, is self-curated. Some existing “regular” artists have added “street” to their titles to gain recognition by latching on to a trend, fronting as a pseudo graffiti artist slash street artist to gain wealth and fame in the art world. These “fakes” would not get away with their false recognition …

This can be frustrating to a lot of writers who put in the hours long before the street art explosion.

Graffiti can be a paradox. Despite their juvenile beginnings, many young “vandals” for whom graffiti is more than a fleeting interest grow up to be very successful illustrators, animators, directors, copy writers, tattoo artists, designers etc. Yet end up spending considerable amounts of money to fulfill the urge to paint graffiti on the weekends.

Graffiti has taught me respect, discipline, good work ethic, given me a unique identity, and most importantly kept me inspired in an increasingly monotonous world.

In the end, it’s the age-old case of mass media appropriating another subculture. This has a positive and negative impact on the movement, depending on your perspective. For aspiring writers turned fine artists the increased exposure will help them get gallery space. But personally, I’d prefer if graffiti stayed out of the galleries and remained as it began, an underground subculture with its own set of rules.

But, what does it mean?

A practitioner of writing, or a graffiti artist.

To bomb or hit is to paint many surfaces in an area. Bombers often choose to paint throw-ups or tags instead of complex pieces, as they can be executed more quickly.

To develop your reputation or “rep” through writing graffiti.

A large, complex, and labor-intensive graffiti painting. Pieces often incorporate 3-D effects, arrows, and many colours and colour-transitions, as well as various other effects. These will usually be done by writers with more experience.