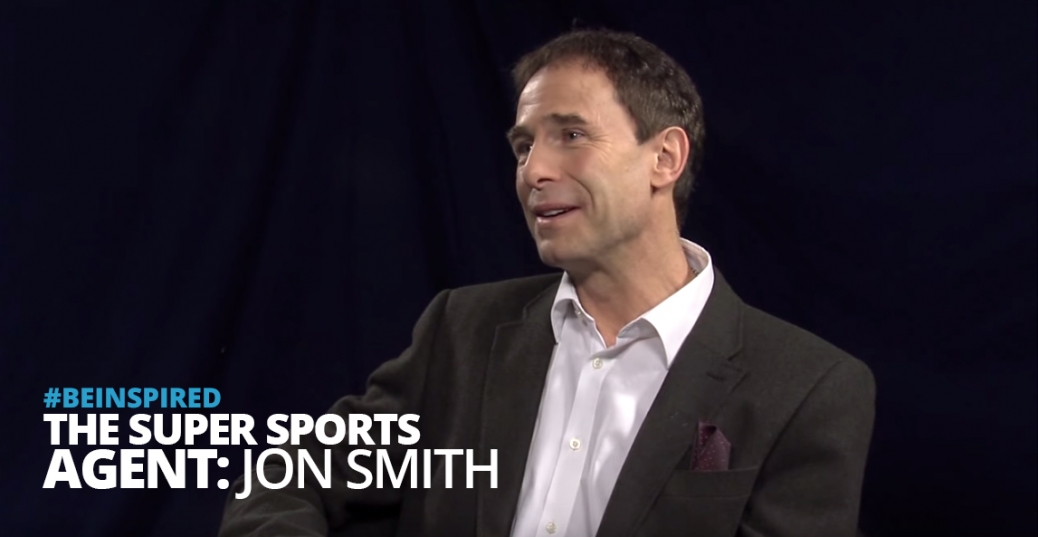 The man who practically invented the modern sports agent in the UK, brought the American National Football League to Britain and took Mikhail Gorbachev out to dinner talks about success, entrepreneurship – and the art of communication.

It isn’t everyone who tells you that having a stammer beaten out of them as a child was a positive experience – but that’s exactly what Jon Smith affirms.
“I had the world’s worst stammer,” he says, adding that people call him Jon rather than his real name of Jonathan because of it. “I’d go, ‘Erm, erm, erm, erm, J, J’ and eventually ‘Jon -‘. They’d be so relieved to hear something come out my mouth they’d go, ‘Hi Jon’ – and that was as far as the conversation ever got.”

Then he met Bill Kerr in the 1960s, a speech therapist with a completely unique view of stammering. His approach sounds barbaric by modern standards.
Kerr believed stammering was caused by fear of communicating, so the brain had to be taught that the result of not communicating was worse. Which meant that he beat the kids whenever they stammered. He recalls he was 15 when he went on a week’s course with Kerr.

“There were eight of us in this class. It took us the first three hours to say ‘Good morning’ to each other!”
“We used to be made to stand bolt upright, purse your lips, nod your head to every syllable and speak very slowly. If we stammered we’d get hit. I mean physically punched or slapped round the face or punched in the back. It was awful, but all of our brains seemed to say, after a day or two, ‘This is actually something that we should do. We should speak properly ‘cause we’re getting hurt’. I was cured in three days.”
Jon had a particular problem with Ps, Ds and Ts and the day he went to the shops and “bought a polka dotted tie – that was the moment my life changed.”
Once he’d started speaking there was no stopping him. It wasn’t long before he started a record production company that made football records. “We made records for Tottenham Hotspur and Queens Park Rangers and Arsenal. We started making money. I was about 17 at that time.”

So, where did that entrepreneurial drive come from? “I think you are born with an innate desire to succeed, most of us are, but I think having a disability can make you that much more ambitious.”
By now he was on a roll. He became involved in the club scene and signed some lucrative music publishing deals.

Then, when he was 29 his wife died of leukaemia. Jon was living in the US, and for three years he says he “lived out the bottom of a whisky bottle,” only to be pulled out by close friends.
While he was in the US, he realised something about the American sporting scene.

“It was a culture shock for me to see sport as entertainment.” One day he linked up with an old pal called Paul Mariner in England who had just joined Arsenal. Jon suggested that with his connections, they start a football agency that would make sport entertainment. The year was 1985 and First Artist was one of the first football agencies in English football.

Luck was on their side. The England Team’s agent was Harry Swales, and he decided he didn’t want to be their agent any more. Paul Mariner had just left the England Team so they followed him. “I’d been in business about 15 days and I’d landed the England Football Team as my first contract!”

The years that followed saw many highlights. Jon did lucrative “ambush advertising” for Coca Cola, brought the US National Football League to Wembley and even brought Mikhail Gorbachev to the UK to give talks.

Over dinner with Gorbachev, Jon was struck by what greatness is. He believes it’s being sprinkled by “a bit of special dust” which means that people have “that extraordinary untouchable quality of knowing that their presence means something on this planet.” Jon also believes everyone has that. When people ask “What does it take to be successful?” He answers: “Explore what you really are and take that bit of your soul and promote it to people. Everybody has a talent.”

So what is Jon’s? “Mine is pretty abstract,” he says, “it’s about getting people to work together in a team for success.” At the centre of that skill, is the great 4 talent, he was handed when he was a boy of 15. As he says himself of his success: “Communication is a cornerstone”