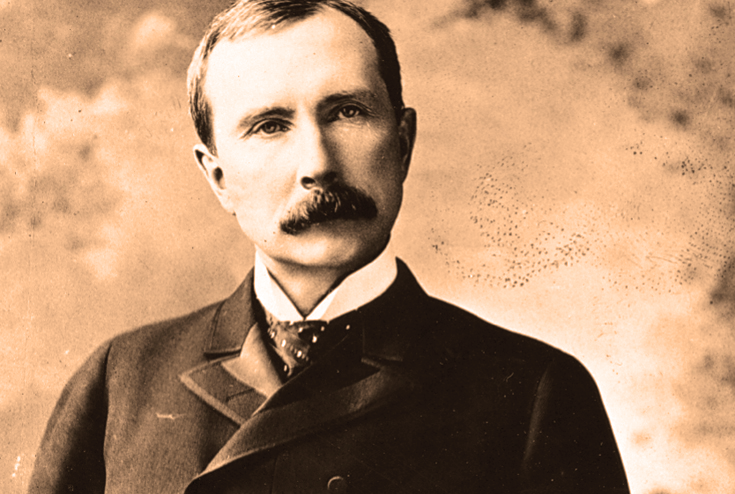 It could be argued that John D. Rockefeller was so successful both because of, and in spite of his father. Born in southern New York state in the mid-19th century, Rockefeller’s father was a traveling elixir salesman, known for his slick business acumen and infidelity. His mother taught Rockefeller to be conservative by nature, always saving where he could and working odd jobs to supplement the household income. Strangely, it was the influences of both of his parents that made up Rockefeller’s polished work ethic. Despite his rocky family life, Rockefeller began his career a studious young bookkeeper. It was at this trade that he honed his systematic mind that was built for manipulating and crunching numbers. Not long into his career, Rockefeller sensed a sea change in the oil industry. Partnering with a shrewd chemist and a consortium of other investors, he built a Cleveland-based refinery that more cost-effectively generated oil. After the Civil War, Cleveland became a major centre for oil production in the U.S. Rockefeller then formed the Standard Oil company, a time during which he came under fire for attempting to drive independent producers out of the industry. He justified his right to centralise oil production based on his pursuit of the American dream. Though he was criticised for his corporate tactics, John D. Rockefeller was a generous philanthropist. As his fortune grew he gave to causes such as public health, education and the establishment of a life-improving path for freed slaves.

“It’s easy to judge Rockefeller through the eyes of modern society, but his dogged approach in business was mirrored by a generous philanthropy that shows his respect for men and women from all walks of life,” Bernardo Moya