John Amaechi: the force to succeed by Bernardo Moya

Home John Amaechi: the force to succeed by Bernardo Moya 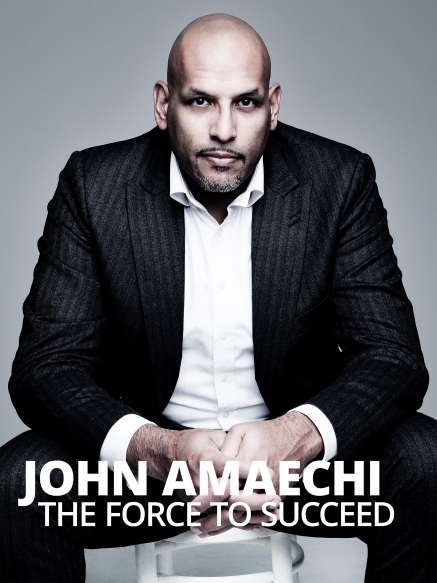 It’s not everyone who turns down the offer of a $17 million contract to play for one of the world’s top basketball teams on a point of principle. But John Amaechi is always going to surprise – after all, he is the first Englishman to play in the world’s most prestigious basketball league, the NBA.

His story is as everyday in parts as it is unique in others. Born in 1970 to an English mother and a Nigerian father in Boston, USA, where his mother worked as a doctor in the General Hospital, he returned with her and two sisters to England after his parents divorced. He grew up in Stockport near Manchester, where he says he hated school.

“It was ironic, really,” he reflects. “I loved to learn things and I loved to read things,” he confides with a warm smile. But what wasn’t right for him was the school experience with its didactic methods, alongside his own sense of being an outsider.

During his early years, Amaechi found his inspiration close to home. His mum, he affirms, was his number one inspiration. Her skills made him decide to become a “Jedi”.

Laughing at how this sounds he says, “It’s a long story”, then goes on to explain, “I used to go on visits with my mother. She was a General Practitioner, and I would watch as she sat in living rooms with distraught families and she did a lot of palliative care. Really she played more of what I thought was like a psychiatrist role; helping them be resilient and helping them cope – and all of this within this tiny window of eight minutes or so that she had for all of these visits she had to do every day.”

He remembers she would wave her hands at people and change the way they thought about things. She would say, “No, no, no, you can do this, this is what you are going to do and then I will see you in a week – and then they would parrot back what she had just said.”

When Amaechi saw Star Wars for the first time as a 7-year-old and saw Obi Wan Kenobi tell the Stormtrooper, ‘These aren’t the droids you’re looking for,’ he says: “I sat in the theatre with my mother and I just stared at her, mouth wide open, because I’m like, ‘that’s what you do’. She looks at me, and she just kind of nods at me. I think she was just acknowledging me, but to me at seven years old it was like that was validation: ‘yes I am a Jedi’.”

Amaechi went to the library and tried to explain to the librarians that he wanted to find out about this, and they responded that they thought he must be talking about psychology – and so his love of psychology was born.

But the other thing that attracted Amaechi so very strongly was basketball, and at the age of 17 after his O levels, and just as he was about to start his A levels, he decided he must give it a try.

He found a coach in Toledo, Ohio and went to High School for a year there, acculturating and learning about basketball. It would be a lovely story to say that his success came to him straight away, but Amaechi had to learn to play basketball among some of the best basketball players in the world.

The work was hard, gruelling, and there certainly wasn’t a straight line to success. He found himself scraping into trainings by the skin of his teeth, but persisting, always persisting, and improving as time went on. All the while, he had a clear goal in his mind, and would picture himself over and again, playing with the NBA.

Anything seemed possible. In America at High School, the local press covers the college games. Massive crowds are pulled in to see the players – and he soon became used to playing before large crowds.

“You suddenly realise that even at that stage you’re almost a semi-professional athlete, because you know you’re competing. I remember distinctly there was a kid in the same conference I was in and he was six feet nine. I knew we were competing for a scholarship and I knew that without that scholarship I would have to go home in disgrace. So it felt very professional, even at that point.”

Amaechi was just 18, but his mature attitude drove him on. He also learned to sidestep the BS from coaches – choosing the Penn State coach who told him the truth – that to get where he wanted to go, he would need to work hard.

As time went on and he progressed, Amaechi also started to give free motivational talks, much to the amazement of the students on the receiving end, who respected the college athletes like rock stars.

“I think if you are authentic and connect with people you can actually have like a little group therapy session where people get to connect with somebody who really cares… I visited a couple of schools; they couldn’t believe that I had actually bothered to show; how do you have time for us… When you see that impact, it’s addictive!”

Amaechi did indeed begin to play in the US league for the Cleveland Cavaliers in 1996, but realised he needed to sharpen his skills in Europe, where the game was not quite so tough. He did exactly that, playing in European leagues, before, in 1999, returning to the US to play for Orlando Magic. It was then that he was offered $17 million to come over to the Legenday Los Angeles Lakers. But Amaechi turned it down, choosing to stay with Orlando.

“It wasn’t for reasons of nobility or whatever,” he says. “It was simply that Orlando Magic was the team that gave me my shot when nobody else would give me a chance to show them how good I could be.”

For him, it was about being able to live with himself and have some integrity.

It was a major career decision and he carried on as a successful professional player – the very first British NBA player, later playing with Utah Jazz in 2001-3.

His career in the US continued until 2004-5 season in which he signed with the Houston Rockets and was bought out of his contract by the New York Knicks.

It was a fabulous achievement – indeed, a unique one. Having retired from the game, Amaechi continues to work in motivational speaking, helping others just as he saw his mother do when he was a 7-year-old.

So, is the force with him? Perhaps not, it’s true to say that there are no secret powers in going for what you want. It takes grit, guts and determination. It takes hard work – and if there is any force at all, it is the force of personality and sheer will that drove him on to succeed.

For success, you must have a great tolerance for mundanity

“After the game, you go home, eat some food and fall asleep. You wake up the next day and you have to stretch and it sounds simple but you know 100 games a year; stretching gets to be a challenge.

Commitment can be tough

“My mother had been in remission from cancer when I went away to the US.

During my second year at Penn State her cancer came back. Every day I’m thinking I can’t waste my time here because all my time here is time I am away from my mum. Every day was a day that I at some point would lament with not having with my mother.”

On coming out as gay

“Of course there was always going to be a backlash in America. America is amazing in its ability to embrace oddness and yet at the same time try and destroy it and it has, you know it has some problems with extremism. On a weekly basis I will get an email or a tweet which says I should die or they would like to kill me, but you know this is the way of cowards right. Cowards send emails, anonymous emails to 6ft 9”, 25-stone black guys. They don’t walk up to them on the street and say that.”