Home Jason Vale On The Elixir Of Life 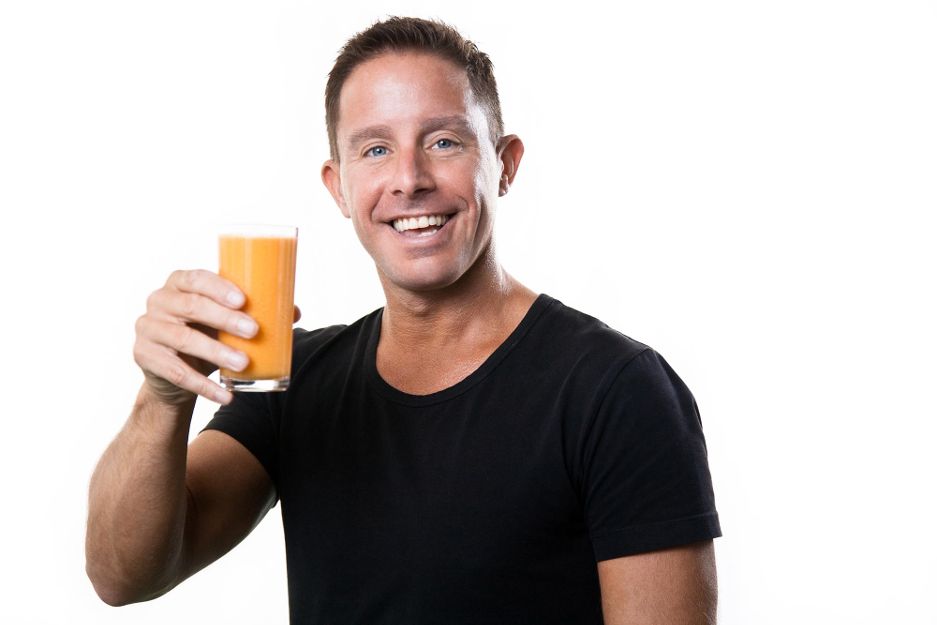 At The Best You’s inaugural Gala and Awards Dinner earlier this year, Jason ‘The Juice Master’ Vale was named Guru of the Year for his contributions to the fields of health, fitness and wellbeing.

It is a well-deserved honour, given that Jason’s life mission is to tell as many people as possible about the extraordinary health-giving effects of natural vegetable and fruit juice. He has committed himself to doing just that, and in the process has spoken to audiences around the globe and sold millions of books.

How did he do it? Like all the best experts who resonate with their audience, one of Jason’s greatest strengths is that he speaks honestly about his own difficult personal experiences. He is not ashamed to reveal who he was and how far he has come, and instead uses his past to help millions of people establish a healthy relationship with food.

“As a young man, I was addicted to junk food,” Jason told the enraptured crowd at The Best You EXPO. “I was obese and had numerous illnesses, which I now classify as ‘lifestyle illnesses’.”

“I was covered from head to foot in an awful skin condition called psoriasis,” he recalls, while behind him on stage an unflattering photo of his former self appears on screen. “It’s an autoimmune disease where the skin repairs itself roughly four times faster than it should. I got these scales on the outside of the body. I also had severe eczema, and severe hayfever. It wasn’t just itchy eyes, it was so bad that for years, every single summer I couldn’t even leave my house – it was like the worst flu you’ve ever had. But the thing that affected my life a great deal was my asthma. I was given two lots of inhalers and steroids. Nobody looked for what might be the causes, only at how to manage them.”

Things came to a head for Jason when, after years of struggling with his many different illnesses, his doctor told him he wanted to treat his psoriasis with coal tar.

“That’s when the real crunch came for me,” he says. “I said, ‘coal tar? That sounds like the stuff you put on the road’. My doctor said, ‘Yes, we want to put that on your skin and keep you in hospital for six weeks.’ It was at that point that I thought there’s got to be another way.”

Jason started looking into the way food affects the body. Along the way, after reading a book by juicing pioneer Norman Walker, he experimented with juicing. It had a hugely positive effect on his health, his asthma was cured, his psoriasis disappeared and his eczema was almost entirely cured. This completely changed Jason’s attitude towards life and towards the foods he had previously been addicted to.

According to Jason, “most people are overfed and undernourished, and are always hungry because their cells are genuinely starving. You don’t think of someone being morbidly obese and think that they are starving, but the irony is that’s what is happening.”

Jason explains that this is because the junk food that people eat lacks the nourishment that the body needs, and thus the body demands more and more of it to try to extract whatever goodness it can along the way. This benefits big food companies because people continue to consume their products.

“It just stands to reason and common sense that if the vast majority of those diseases are caused by diet and lifestyle, then the simple answer, surely, is to change the diet and lifestyle. ” says Jason. He adds that “most foods that say 100% fat-free are loaded with white refined sugar. If something says sugar-free, chances are it has artificial sweetener in it. None of these things are what the body would eat in nature.”

If what you’re eating is making you ill, Jason says you need to look at eating simple, whole foods. He explains, his eyes twinkling with energy: “there’s only one place logically where anyone should be looking for their long term health, and it’s the same place that wild animals look for their long term health and their nutrition – nature. We are the only creatures in the world that cook our food. You don’t see a gorilla with a barbecue.”

Similarly, processed foods are out. Jason explains that “if you find any foods with a label on, then maybe that’s the problem. Whatever you’re going to eat, you need to ask yourself this question ‘is this low human intervention food?’, that is, how many humans have interfered with this food before it came to me?”

The results of Jason’s juicing philosophy can be extraordinary. In an experiment he ran and also filmed for the documentary Super-Juice Me!, Jason took eight people with chronic illnesses through a 28-day juicing programme at Juicy Oasis, his premier retreat in the heart of a Portuguese forest.

Many of the clients had combinations of sleep apnea, ulcerative colitis, Crohn’s disease, asthma, morbid obesity, food addiction, pulmonary sarcoidosis, among problems. The transformative effects of living on specially prepared juices were extraordinary. One of the participants, who arrived needing to take 52 pills a day, was so transformed that afterwards his prescription was reduced to just two pills. Everyone saw vast improvements in their health, most experienced weight loss, and for many, addiction, and asthma and Crohn’s disease were effectively cured.

Jason is philosophical about these outcomes. While he does not claim that juice is the cure for everything, he believes that his results prove that many modern-day illnesses come from a poor understanding of how food affects one’s life.

“It seems really odd that we’ve reached the stage in 21st century medicine that we call alternative medicine anything other than medical drugs, and no-one questions that. Surely we should try plant-based medicines and then the alternative should be medical drugs, not the other way around” says Jason. “The way in which we are treating lifestyle diseases is flawed on so many levels. I’m simply saying that if you do two simple straightforward things, you simply remove the toxicity coming in, the rubbish and replace the deficiencies, then the body heals itself.”