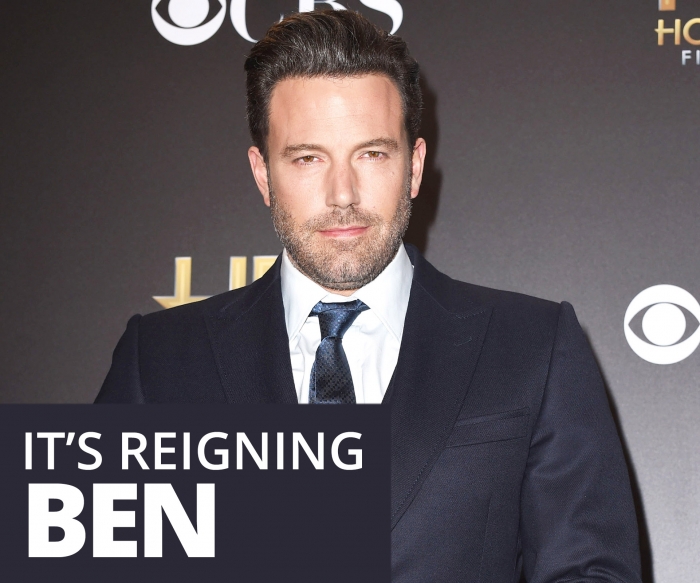 It may seem that Ben Affleck leads a charmed life, but things weren’t always easy for the actor, director and philanthropist. He’s had his fair share of ups and downs, but he demonstrates that tenacity and talent count.

And so, there came a day when Ben Affleck turned to his best buddy Matt Damon and said, “I am in the absolute worst place you can be. I can sell magazines, but I can’t sell movie tickets.” The early 2000s were a bad time to be Ben Affleck. His career had taken a nose-dive after critically lacklustre roles in Daredevil, Surviving Christmas, Jersey Girl and, the biggest turkey of them all, Gigli, with then-fiancée Jennifer Lopez. His personal life was tabloid fodder and he was widely dismissed as an untalented pretty-boy hack.

It seemed everybody derided Ben Affleck, which was strange, as he is recognised by friends and industry
insiders as one of the nicest guys in Hollywood, and is rightly lauded for his philanthropic pursuits. Yet, Affleck has clawed his way back to credibility and success, currently riding high in his very own Cinderella story.

Affleck has achieved widespread critical acclaim as the director of films such as The Town, Gone Baby Gone and Argo. He’s also enjoying a renaissance as an actor with a celebrated role in Gone Girl and an enormous amount of hype surrounding his upcoming appearance as Batman in Batman vs. Superman: Dawn of Justice. And he has a fairy-tale family with fellow actor Jennifer Garner. It’s been a hell of a ride: the rise and fall and rise of Ben Affleck.

Born Ben Geza Affleck in 1972 in Berkley, California, his family moved to Cambridge, Massachusetts when he was two. The household was politically active and Affleck grew up surrounded by activists and artists.

Both he and his brother, Casey, were interested in acting from an early age and auditioned for television advertisements and film roles through their mother’s friendship with a casting director.

At eight, he met ten-year-old Matt Damon and the two quickly became inseparable. Although in different grades, they spent lunch breaks discussing their plans to become actors. As teenagers, Affleck and Damon travelled to New York for auditions, saving money for train and airline tickets in a joint bank account.

Affleck enjoyed a few small roles in film and television while he was growing up, but his first big break was as a high school bully in Richard Linklater’s movie, Dazed and Confused. He also starred in a couple of films directed by his good friend Kevin Smith including Mall Rats and the lead role in Chasing Amy. The real breakthrough came with Good Will Hunting, the award-winning film that he co-wrote and co-starred in with Damon.

“That period in my life was dreamlike”, he says. “It was like one of those scenes in an old movie when a newspaper comes spinning out of the black on to the screen. You know, ‘Hundred million box office! Awards!’”

He took the role of Matt Murdock in superhero movie, Daredevil. It was a character he had loved as a child, and he was excited about the role. It was while making the film that he met his future wife, Jennifer Garner, who
co-starred with him. The film was a commercial and critical failure, a fact that haunts him to this day.

“Daredevil was the only movie I actually regret”, he says. “It just kills me. I love that story, that character, and the fact that it got f****d up the way it did stays with me.”

A string of poorly-received roles followed, with the nadir being crime-caper Gigli. Part of the reason that the film was so gleefully derided was that he was starring with his then-fiancée Jennifer Lopez. Their relationship at the time was on the front page of every tabloid. ‘Bennifer’, as their romance was dubbed, brought an enormous amount of pressure onto Affleck and his career.

The Los Angeles Times published an article on the downfall of Affleck’s career, commenting: ‘While the critics see Affleck as a big piñata and the tabloids see him as a reader magnet, few industry professionals seem to be gloating over Affleck’s travails.’

It took a while, but Affleck managed to pull out of the tailspin. He took a two-year break from acting, lamenting the fact that he was being sent only terrible scripts.

Despite the difficulties that he encountered, Affleck is reluctant to complain. “I was a little bit exhausted of both myself and my life, so I wanted to try to control or manage it”, he says. “I definitely reject the narrative that says, you know, ‘Bad guy turns it around’. I wasn’t a criminal.”

He eventually returned to acting with a well-received performance as George Reeves in Hollywood. But his true comeback started when he took up directing. His first film, Gone Baby Gone, was a crime drama starring his brother, Casey, and set in his old stomping ground of Boston. It received rave reviews and paved the way for his second feature, The Town. This got the world thinking that possibly it was wrong about writing Affleck off. This was confirmed when he won the Best Picture Oscar for the third film he directed, Argo.

“I was thrilled for him”, Matt Damon says of his best friend. “He deserved everything he was getting. Just for going through what he went through, he deserves it. It was tough watching him get kicked in the teeth for all those years because the perception of him was so not who he actually was. I always felt a knee-jerk need to defend him. It was upsetting for a lot of his friends because he’s the smartest, funniest, nicest, kindest, incredibly talented guy. And the perception of him was the opposite. That was tough.”

Things are continuing to look good for Affleck, with Gone Girl receiving critical acclaim. “Once I knew David Fincher was doing it, I was in. Absolutely. I would have done the phone book with him.” The film tells the story of a kidnapped woman (Rosumand Pike) and her husband’s (Affleck) quest to find her. A media circus springs up around the case, with incredible pressure being brought to bear on Affleck’s character – something he knows quite a bit about in real life.

“It’s a little different”, he says. “I mean, I’ve definitely had a lot of experience with the press and I’ve been doing this as an actor now for a while, so I’ve sort of seen a lot of different sides of it. This particular satire is about the
cable media, the way that it finds sensationalism and it uses that sanctimoniously. Part of our culture has become kind of addicted to that. We’re always turning on the TV and it’s like the same 20 seconds of the same story, over and over again.”

Affleck chooses to focus his efforts on other worthwhile causes. He was drawn to New York Times columnist Nicholas Kristof’s coverage of human rights abuses in the Democratic Republic of Congo. He has made numerous trips to the region to educate himself through meetings with academics, philanthropists, people at NGOs and those who work on the ground.

During two 2008 trips, Affleck reported on the region’s crisis for ABC News Nightline and directed a short film, Gimme Shelter, for the UN Refugee Agency.

During the Kony 2012 campaign, Affleck also wrote an essay for The Huffington Post. While welcoming increased awareness of the issue of child soldiers, he warned that Western ‘saviours’ are “ineffectual at best and deadly at worst” and stressed the importance of funding “remarkable local organisations.”

Throughout all of this – the hardships and the success – he has remained humble, hardworking and unfailingly nice. With that level of good karma, it seems likely that the good times will continue to roll on.

Yes, it seems like Ben Affleck is finally in the absolute best place to be.