How To Think Like Sherlock Holmes by Maria Konnikova

Home How To Think Like Sherlock Holmes by Maria Konnikova 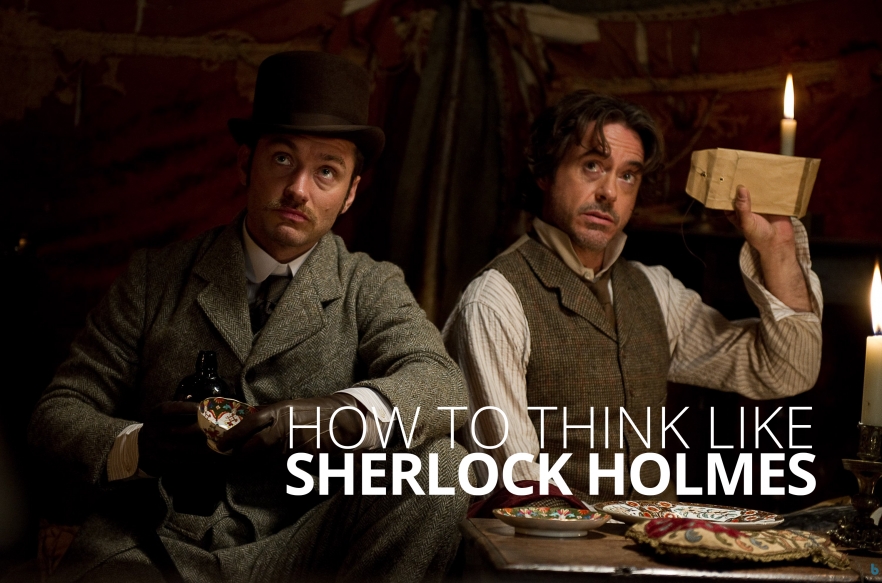 Although Sherlock Holmes isn’t real, his insights into the human mind do more to teach us about how we do think and how we should think than many conventional sources. Maria Konnikova, author of the recently published book How To Think Like Sherlock Holmes tells us what we can all learn from “the world’s only consulting detective.”

Sherlock Holmes teaches us to be constantly mindful of our surroundings. When I was little, my dad used to read us Sherlock Holmes stories before bed. While my brother often took the opportunity to fall promptly asleep on his corner of the couch, the rest of us listened intently. I remember in particular one story that has stayed with me. Not the whole story, actually, but one exchange that caught my attention.

In “A Scandal in Bohemia,” Holmes instructs Watson on the difference between seeing and observing:

“When I hear you give your reasons,” I remarked, “the thing always appears to me to be so ridiculously simple that I could easily do it myself, though at each successive instance of your reasoning, I am baffled until you explain your process. And yet I believe that my eyes are as good as yours.”

“Quite so,” he answered, lighting a cigarette, and throwing himself down into an armchair. “You see, but you do not observe. The distinction is clear. For example, you have frequently seen the steps which lead up from the hall to this room.”

“Well, some hundreds of times.”

“Then how many are there?”

“Quite so! You have not observed. And yet you have seen. That is just my point. Now, I know that there are seventeen steps, because I have both seen and observed.”

The exchange really shook me. Feverishly, I tried to remember how many steps there were in our own house, how many led up to our front door (I couldn’t). And for a long time afterward, I tried to count stairs and steps whenever I could, lodging the proper number in my memory in case anyone ever called upon me to report. I’d make Holmes proud (of course, I’d promptly forget each number I had so diligently tried to remember – and it wasn’t until later that I realised that by focusing so intently on memorisation, I’d missed the point entirely and was actually being less, not more observant).

But what does it mean to go beyond seeing and to actually observe? Conan Doyle’s Holmes had taught himself to observe on a regular, almost superhuman basis. For him, taking note of the myriad inputs from his surroundings was a matter of course. He was never not observing, never not in touch with his environment. He had mindfulness down to an art. Most of us aren’t as careful.

Our senses – and here I don’t just mean vision; I mean all of them, touch, hearing, smell, taste – are powerful forces. Every day, countless items, some glanced, or heard, or felt, or smelled only briefly, perhaps without ever registering in our consciousness, affect our minds and play into our decisions. But for the most part, we don’t pay attention; and we fail to realise what it is that is guiding us at any given moment, or fail to note something that would have made a crucial difference to our decision calculus.

Most of us are lucky to have eyes that, like Watson’s, are every bit as good as Holmes’s. Ditto the rest of the senses. But so often, we squander them. We block ourselves off from the world, armed with headphones, dark glasses, eyes that look straight ahead and hurry on to their destination as quickly as possible, angry at the slightest interruption. How much do we miss that would actually make a difference, that continues to affect us even though we don’t realise it’s doing so? I’ve written in the past about the potential of smell to do just that, but the same holds for every single one of the senses we take for granted.

Using our senses to increase mindfulness is key. We and our decisions both would be well served to take some of the famed detective’s advice, to go beyond seeing and into the realm of observing. Take note of what’s around you. Take note of how or why it affects you. You might not turn into an expert crime solver, but I guarantee, you’d be surprised at the difference it can make to the quality of your life and your decisions.

This article courtesy of Maria Konnikova / The Scientific American, 2011.

The character of Sherlock Holmes was inspired by a real life person, Dr. Joseph Bell, for whom author of the Sherlock Holmes books, Conan Doyle, had worked as a clerk at the Royal Infirmary of Edinburgh. Like Holmes, Bell was noted for drawing large conclusions from the smallest observations.