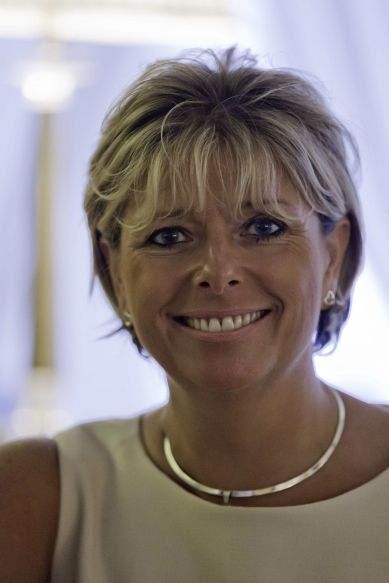 Penny Power, entrepreneur and social networking specialist reveals how businesses are built in the IT Age.

When Penny Power was a girl, her parents paid a careers adviser to give her a psychometric test. She was advised to be a Butlins redcoat. Recalling the moment, this 48-year-old entrepreneur in the IT industry laughs and says:
“Oh my God! I wonder, if I had taken that advice…”

At school, she found she didn’t fit in with the public school culture, or with the teachers, some of whom, at this ex-convent school, were “cruel” nuns.
“I laughed a lot and that wasn’t acceptable!” she explains.

She also didn’t feel academically gifted, feeling more drawn to interacting with others. Then, after befriending a young boy with cerebral palsy she decided to become a physiotherapist. On leaving school and Sixth Form, she was accepted in to university in London to become a child psychologist.

It was in her gap year as she was saving money that she was invited to apply for a job in telesales by a manager at Vodafone who liked her friendly personality. But when she was sent on a telesales training course, she realised the telesales approach she was taught was not for her.

“I used to just pretend to be on the phone,” she admits.

It was then Penny realised sales were not about scripts, but about what she had in spades – the ability to connect and build relationships. When she resigned to go to University that September, her boss persuaded her to stay on.

By the age of 24, she was Sales and Marketing Director of another company
with a £150 million budget.

At that time she also met her husband Thomas, and when they had their first daughter together, she told him that she wanted to stop work and “Go back to my original roots of doing something to help people.”

Her following years saw her working as a volunteer at the Stroke Association. She went on to have two more children and applied herself to helping others.
Then, one day she realised she was missing the business side of herself – and so was her husband.

So, Penny became the first agent for Usborne Books, selling PCs into people’s homes, and demonstrating how they could be used to educate children. In a short time, Penny had built a network of 650 agents.

“What I learnt was the power of remote working. I learnt the power of building a network and creating training. Every Saturday I used to go to Richmond and anybody who wanted to recruit an agent would send them there and I would train them. I ended up creating a PowerPoint Presentation with a voiceover and a four hour CD training disc to send out to agents.”

All was going well until PC World started to undercut them. It was then that Penny decided to come out of the business and focus on her new child, TJ.
During a discussion about e-commerce and the internet with her husband Penny told him, “What I see as exciting about the internet is individuals being connected across the world and the opportunity for the growth of home working. Wouldn’t it be amazing to create a network online for homeworkers where they could talk to one another, inspire one another, share knowledge with each other, even trade with one another across the world?” That was the birth of a whole new business: Ecademy. “It was born as a totally altruistic little thing I could do from home. Wouldn’t it be nice to support other people like me to learn how to do this?”

Penny received a massive boost to her plans when an investor offered £250 million to develop the idea of Ecademy.

As part of the deal, Penny ensured that she would be able to retain her autonomy to build the business and maintain her relationship with her children. “It grew and grew until we were in 200 countries with 650,000 members. It was fantastic and members paid £10 a month to join.”

As the market for social networks changed, with the advent of Facebook and LinkedIn, Penny found it increasingly hard to make the network stay profitable, and so last year she sold it. This was not the end of her involvement in IT and education.

On the back of her experiences in the social networking world, she had written a book called “Know Me, Like Me, Follow Me” that attracted the attention of Mark Prisk, then Minister for Business, who invited her to advise him on digital content and strategies for businesses.

It was both a validation and an opportunity. She compiled a Manifesto for Digital Business in Britain, advocating embedding young people who have grown up as “IT natives” in businesses as apprentices and created an apprenticeship scheme which is now being licensed throughout the country and globally.

“At the end of the year of their apprenticeship they’ll have a qualification and a set of skills that will enable them to make the choice either to stay in employment or start their own business.”

So what does business learn from her apprentices? A whole new way of thinking, it seems. “The culture of going online and being social means you have to be open, random and supportive to people. That’s a network thinking culture – the culture of being a friend online. Business people come from being closed, selective and controlling, so they come from opposite directions.”

Penny explains that being closed is more task driven, while being open is more relationship driven. And networking is how to build business.

Coming from someone who discovered that a packet of Tunes can swing a major deal, it makes complete and utter sense.

So what is it that Penny Power wants most of all? She thinks a moment, before answering:

“That business people are more collaborative and supportive and loving towards one another.”

That’s quite an aspiration!

Penny Power has been involved in the Digital Skills Agenda for 15 years and could see the skills gap emerging within businesses who all need to market into the social channels.
In 2011, she created Digital Youth Academy and a brand new Apprenticeship for businesses to be able to recruit Born Digital Youths to set up and run their social media conversations.
This is a really exciting trailblazing idea bringing the jobs of the future to businesses who know they want to be here in the future!
Hiring an Apprentice is a fabulous way for businesses to expand their workforce. The terms of employment are very attractive, no NI, no PAYE and a minimum wage of £2.65. This gives a young person such a great opportunity and a fabulous qualification for their careers.

You can recruit a young person, if you would like to know more check out here at: www.digitalyouthacademy.com/employer