I wouldn’t say I am lucky… Interview with Johnson Beharry, VC

Home I wouldn’t say I am lucky… Interview with Johnson Beharry, VC 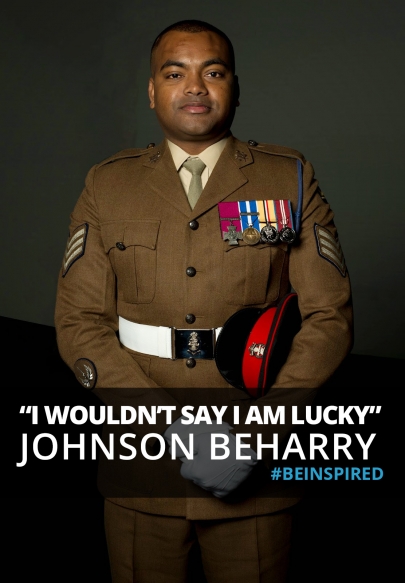 It isn’t often you meet a man who has put his life on the line to save others, who has looked death in the face and been wounded so badly that doctors didn’t think he would survive, but that is the story of Johnson Beharry, VC.

Johnson is a quiet, self-contained man who has a definite presence. Born and brought up in Grenada, in the Caribbean in 1979, from an Afro-Indian family, Johnson moved to the UK in 1999 at the age of 19. As a teenager, his life was hardly the conventional mould from which heroes are cut. He started out as a small-time drug dealer, selling cannabis.

But this was clearly not something Johnson felt right about and he joined the Princess of Wales Regiment at the age of 21.

Johnson: I just looked at my life and I said to myself, “why am I doing this? What would my Gran think of me knowing I’m in a country where I could do something positive with my life and this is what I’m doing? And what would she think of me?” I couldn’t cope with the answer… So I decided I had to stop there and then…

Johnson served in Kosovo and Northern Ireland. Then, in 2005, while driving the lead Warrior armoured vehicle of a convoy, his platoon was caught in a ferocious enemy ambush. Beharry was faced with a stark choice: to drive over a mine and take his platoon to safety while very likely losing his own life, or do nothing and have all his men die together.

Johnson: I knew when that mine went off I was going to die, because I was sitting next to the engine. The engine and then me – and the mine is right at the front.

So, what I decided to do is place the big lump of metal, the engine, over the mine so the engine is going to take most of the blast. Yes I’ll get killed but the guys at the back I was hoping they were going to be okay. …The vehicles from behind would pick the guys up and carry on. Well I did go over the mine. Did it go off? I can’t tell you! There was so much explosion!

With his Warrior still miraculously under power, he drove deeper into the “killing zone”. Then, he saw something coming towards him.

Johnson: I had the hatch open because my driver’s tunnel was full of smoke… I pulled the hatch closed… I didn’t manage to lock it, it blew off in my hand. …It was a rocket propelled grenade coming directly at my head.

Johnson’s story didn’t end there. With his vehicle on fire, still fighting an ambush and with no communications, he fi nally located a company of soldiers in a building. With them nearby, he now had to think about saving his comrades.

[I] pulled him out, put him on my back… carried him into safety through the fi re. Come back again, did the same thing with the gunner… Then I went round the back of the vehicle. There were four guys in the back. Individually I carried them to safety then checked the other vehicles for casualties… then I went back and sat in the burning vehicle.

He now drove the vehicle under heavy fire down a river bank, where he disabled it and the weapons system.

Johnson: I sit in the back of a vehicle and the last thing I remember was someone… removing my helmet from my head, and saying to me, “Harry, Harry, stay with me.”

And they were pouring water on me. About four to six hours later I wake up in camp.

Johnson’s actions that day saved 27 of his comrades. But he also encountered more danger six weeks later. Once again he drove into an ambush. This time a grenade exploded six inches from his face. He managed to reverse the vehicle out, under heavy fire, but his whole head was smashed and he was given only a 1% chance of survival – with his head and spine injured, and severe damage to his shoulder.

Nevertheless, Johnson pulled through. He is philosophical about his survival.

Johnson now supports numerous charities and is passionate about educating teenagers to give them a sense of purpose in life. In his view, you “can’t give up” on them, but have to get through to them to use their energies.