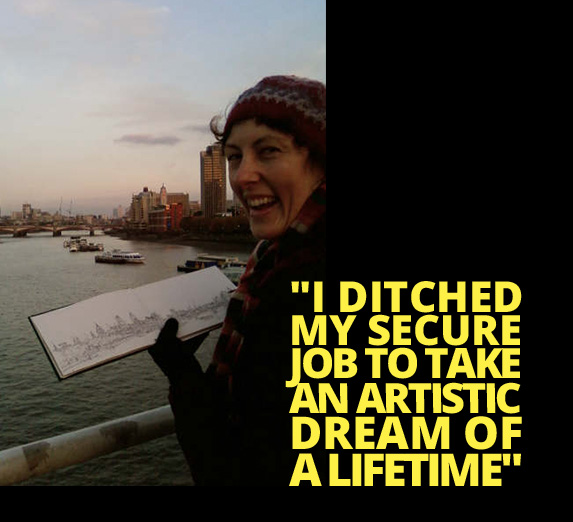 “My passion is sketching and painting the world around me.

Ever since leaving school I have kept a sketchbook with me, all through my training, qualifying and working as  an architect.

Then, in 2000, aged 30, while working as an architect in London, I realised that though architecture was my profession, I wanted to do more with my passion for drawing in my sketchbooks and if possible do some good along the way.

It was difficult to articulate this rationally, still is, but I knew that what I thought then would be a few months’ sabbatical to go off on a sketchbook adventure was the right thing to do.

Having made that decision, I came across the UNESCO World Heritage List online. This list designates sites as having properties of outstanding universal value, and if you haven’t seen it, take a look, as it is an amazing record of our global cultural and natural heritage.

Inspired by the list, I soon began to plan my adventure with a few self-imposed parameters to make the journey viable. These included my limited budget, the length of time I wanted to be away from home, and the fact that I would always try to travel as much as possible in a continual direction on ‘terra firma’ and a little ‘aqua’ so as to see the cultural connections gradually unfold.

I naively wrote off to lots of organisations hoping to secure assistance financially (limited success) or otherwise (more success) and I also hoped to raise some funds for charities I would come across on my journey (even more success).

Then a few weeks before departure, as I was about to go on bended knees to the bank manager for my crazy, but carefully organised plan, I had the great good fortune to be awarded a Churchill Travelling Fellowship by the WCMT*( great success!).

This not only took away any financial worries, it also opened doors and gave my journey more purpose.

I left London in April 2001 and travelled for five months through France, Italy, Greece, Turkey, Iran, Uzbekistan, India and Nepal. During this time I completed 106 annotated, watercolour sketches recording my experience.

This truly was a journey of a lifetime. My sketchbook was my passport to people and places. When standing or if lucky, sitting somewhere for several hours, simply drawing with just a black biro, I became a part of that place for a time.

Sketching erodes cultural and linguistic barriers, as a picture and the process to create it can be universally understood. People were friendly, informative, inquisitive and afforded me great hospitality.

When I returned to the UK, I did not know how to take forward my amazing journey and pay the bills. So, for a while I worked part-time as an architect, whilst also producing an exhibition of paintings derived from my sketchbooks.

After this I was invited by an MP and Churchill Trustee to sketch as ‘artist in residence’ in the Houses of Parliament and then the Athenaeum. I also undertook a wonderful sketchbook project along Hadrian’s Wall, also a World Heritage Site, with the Hadrian Wall Partnership.

My journey from architect to artist became complete in 2004, when I became the MCC Young Cricket Artist 2004 – 2005 at Lord’s Cricket Ground in London. In that season the MCC published a book with Methuen about MCC president, ‘Tom Graveney at Lord’s’ and decided to include my Lord’s sketches within the book. Methuen then asked me if I had any other sketches of the city. In reply I presented my sketchbooks of London and London in Landscape was published in 2006 and London in Landscape Volume II came out in 2009.

In 2010, after the arrival of my son we moved to lovely Lincolnshire, and in 2011 Stamford Sketchbook was published by Walkers. I’ve given talks about my work and my journey inspired by World Heritage Cities and Sites featured quite prominently.

“Fourteen years on from my fellowship journey I have no regrets about making my living as an artist. It is hard work and requires a lot of determination.

The importance of architecture is ever present in my art and both subjects are inextricably interwoven in my work. It is not easy and earnings are variable (so in a good month, save!) but overall enough. The freedom, diversity, ability to ‘do good’ in the community and inspire others through my work makes it all worth it. 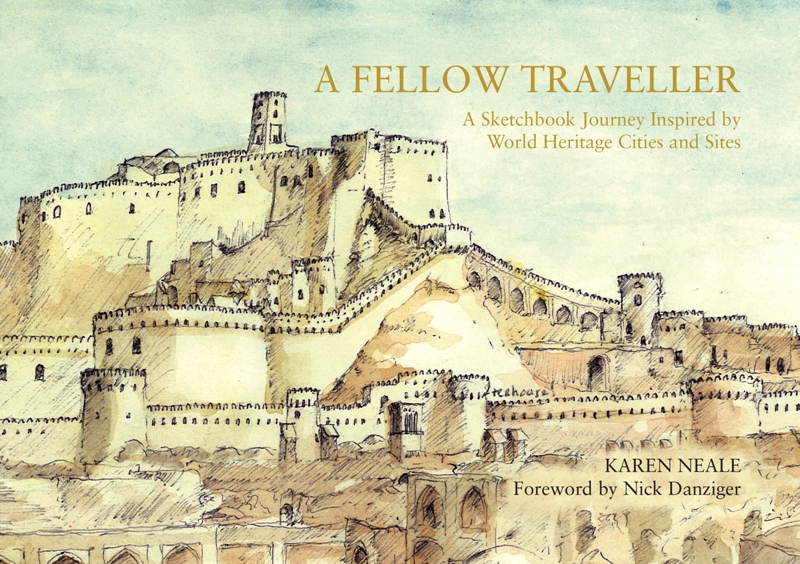 A Fellow Traveller, A Sketchbook Journey Inspired by World Heritage Cities and Sites by Karen Neale (published 2015 by Karen Neale Art) can be ordered directly via karenneale.co.uk