The Hunger to Win: Profile of Rafael Nadal

Home The Hunger to Win: Profile of Rafael Nadal 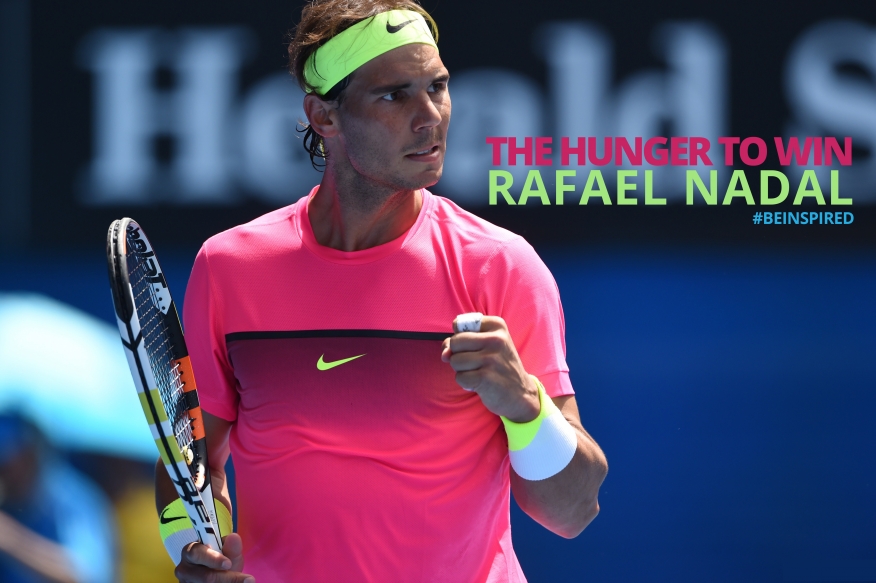 What makes the world’s Number One tennis player so great? The Best You discovers Rafael Nadal and finds a fascinating combination of brilliance and vulnerability.

With his famous chiselled features and his mop of dark hair, Rafael Nadal is every inch the 21st Century photogenic sporting hero. His intensity before matches is legendary, and on the court he maintains an extraordinary focus on winning.

Describing his mental state during his 2008 Wimbledon win, Nadal says:

“What I battle hardest to do in a tennis match is to quiet the voices in my head, to shut everyting out of my mind but the contest itself, and concentrate every atom of my being on the point I am playing.”

About Wimbledon, he says “the cathedral hush of Centre Court is good for my game.”

And just as if he really is in a cathedral, Nadal is a man of rituals. Before matches he runs through a series of “inflexible routines” that awaken the world-class sportsman in his soul.

If he is about to play after lunch, he eats the same pasta dish – “no sauce, nothing that could possibly cause indigestion – with olive oil and salt, and straight, simple piece of fish. To drink: water.”

Then, an hour before play he goes deeper into the routine. “I stop being the ordinary me when a game is on. I try and become a tennis machine, even if the task is ultimately impossible. I am not a robot.”

He bottles up all his normal feelings. Doubts, hopes, everything is flattened out. He begins to think only in the moment.

Forty-five minutes before a match, Nadal takes an ice cold shower. “Under the shower, I enter a new space in which I feel my power and resilience grow. I’m a different man… I’m activated,” he says, talking of being “in the flow” – that moment in which a sportsman no longer thinks about his game, but enters a trance like state of heightened consciousness.

The rituals continue. Be they receiving a massage, putting in his hair band with a kind of automated absence, or having his hand strapped to prevent the skin tearing when he takes the powerful shots he is famed for.

He talks of it with extraordinary precision. And though he claims not to be a “tennis machine”, this ritual of focus certainly seems to take away the ordinary Nadal from the equation.

Nadal on the court is intimidating, fast, strong and powerful. Standing at 1.85 metres (6 feet 1 inch) tall, he exudes invulnerability – perhaps even arrogance.

Off the court, however, he is a different person altogether. Cautious, even neurotic and vulnerable, Nadal’s rise to fame is not one of the all-conquering individual rising to world dominance driven solely by his sporting genius.

While individual brilliance is an element of his success, his life and his personality tell a far more complex story, revealing how much he is the product of a tight-knit family and community.

Born in 1986, Nadal grew up in Mancora on the Spanish island of Mallorca. He remembers his childhood days fondly. “It was a fairytale childhood,” he says, recalling how he used to spend time with his grandparents and other adults, staying out till late as a boy.

He loved football best of all. Playing on the streets with the other boys was a delight for him, and he played whenever he could, loving the team ethos.

He started to play tennis at the age of four, when he saw his uncle Toni Nadal, a former professional tennis player, teaching a group of boys and decided to join in.

Uncle Toni’s influence was to be pivotal to Rafael’s life. Described as a “severe man from another era” by some who have met him, Toni saw Rafael’s talent and decided he had the potential to be a superstar.

Rafael’s father, Sebastian, operated a glass manufacturer selling trinkets for the growing tourist trade in Mallorca. He arranged for Toni to look after Rafael’s coaching in return for a partnership in the business, and the coaching started in earnest.

“Toni was tough on me right from the start, tougher than the other children,” Rafael remembers. He used “rough language” with Rafael and fired balls at him to startle him when his attention wandered. Toni made him clear up the balls from the court and sweep it after the sessions, something none of the other boys had to do. Little Rafael would sometimes come home from training sessions crying. Once, when his mother asked him what the matter was, he recalls telling her his uncle had called him a “mummy’s boy”. But he begged her to say nothing to his uncle, because it might interfere with his coaching.

Despite Toni’s toughness, Rafael stuck at the sport, growing keener when he started to win competitions at the age of seven. But Toni remained harsh. He never gave praise, focusing on the mistakes Rafael had made and how to improve. When the seven-year-old Rafael forgot to take his water bottle to a tournament, Toni wouldn’t buy him another. He should “take responsibility for his actions” he told him, both on and off the court.

When asked if he was unnecessarily hard on Rafael, Toni replies that he “never pushed the boy more than he could take.” His aim, he tells people, was to ensure that Rafael should learn about endurance.

“Endure. Learn to overcome weakness and pain, push yourself to breaking point, but never cave in. If you don’t learn that lesson, you’ll never succeed as an elite athlete,” he would tell him.

Toni accepted no excuses from his nephew. It was never a good enough excuse that the strings were too loose on the racket, or that Rafael had slept badly. Everything he did on the court was Rafael’s responsibility.

He admits that “Often I’d struggle to contain my rage.” But he also adds: “All that tension in every single coaching session, right from the very start, has allowed me today to face up to the difficult moments in a match with more self-control than might otherwise have been the case. Toni did a lot to build that fighting character people say they see in me on court.”

Admirable? Perhaps. But listening to this account of his childhood, you can’t help asking why Rafael regarded his childhood as a “fairytale one”!

For Toni, the answer is clear. Rafael was “clever.” clever enough to know that his elders knew what was good for him. A simple answer, and partly right. But it doesn’t tell the whole story.

Whether it was something that Toni instilled in him, or something he had naturally, Rafael was intensely competitive, even when he was young. His reward from playing was winning.

“I don’t have a sense of humour about losing,” he says with a set to his jaw. He recalls his fits of rage a child when he lost at card games. It’s still in him. Even as an adult he has accused his family of cheating at cards because he would not accept defeat.

The importance of winning came home to his father, Sebastian, when Rafael was just 10 years old. He had spent the summer with friends on the beach rather than training, and it showed when he lost his next match.

His father, seeking to console him said: “Come on, you’ve had a terrific summer. Why’s that not enough?”

Young Rafael’s answer was clear and to the point: “Yes Dad, but all the fun I had then can’t make up for the pain I’m feeling right now. I never want to feel this way again.”

It is this attitude that Rafael has brought to the game as an adult. Combined with his capacity for endurance, it is an unstoppable mixture.

Rafael says of himself that unlike Federer, who appears to be a “natural” on the court, he has had to work at everything he does. For example, before his first Wimbledon win, his left foot hurt so much he had to have an injection in the sole to anaesthetise it.

He is used to playing through pain and fighting on. As a boy he slipped and broke the little finger in his left hand (Rafael is a left-handed player) in the first round of the Spanish under-14s national championship. Rather than withdraw, he played on, and took the title.

He has also had to fight against a painful problem in his right foot, no doubt exacerbated by all the hard work he put into tennis as a child. He has a weakness in the staphoid tarsal bone that sits directly over the arch, causing him excruciating pain. At the age of 19, when the weakness came to light and nearly crippled him, he was faced with having to give up tennis after one of the world’s leading experts on the condition told him he would never be able to play again. It was perhaps his darkest time.

Then, since he was already sponsored by Nike, Rafael approached them to design an inner sole to his shoe that would take the weight off the troublesome bone. It caused further problems with other muscles and tendons as the weight in his foot was subtly shifted, but he began to play again. He admits now that he “plays through the pain” every day. The change to the sole of his trainers is what he describes as a “work in progress”.

Because of this, there is a sense of urgency in Rafael’s play. He is acutely aware that his playing time is finite. Always at the back of his mind is the idea that the shot he is now playing may be his last. Of course, all athletes have this, but it has been hammered home to a greater extent to Rafael than to many others, making him aware that every day and every minute of every game must count in the most intense of ways.

Yet, with all of this intensity on the court, Rafael is vulnerable and soft off the court. It seems difficult to believe, but he doesn’t like the dark, preferring to sleep with the lights on, and he is deeply reliant on his family. His mother describes his driving as “cautious”, while his sister calls it “terrible” because he is so nervous. He is also afraid of animals. As a child his friends had to lock their dogs away before he would visit them. On tour in South Africa when others went to see and handle tame lion cubs, he would not go. He doesn’t, he says, “trust the motives” of animals.

Nadal’s is a tightly controlled and extreme world. On court, he is a hero. At home, he is an ordinary man, who needs his world to be a very particular way. He relies heavily on his extended family and worries about his sister to a level bordering on neurosis, calling her two or three times a day when he is away on tour.

There will come a day when Nadal is no longer playing tennis at a world class level. Perhaps then it will be time for him to relax and learn a little more about the other things in his life that his tight, controlled view of the world has not yet allowed him.

Yet perhaps his achievements have been so great so far precisely because of that very need for control.

Rafael Nadal At A Glance