How to be more TED-like

Home How to be more TED-like 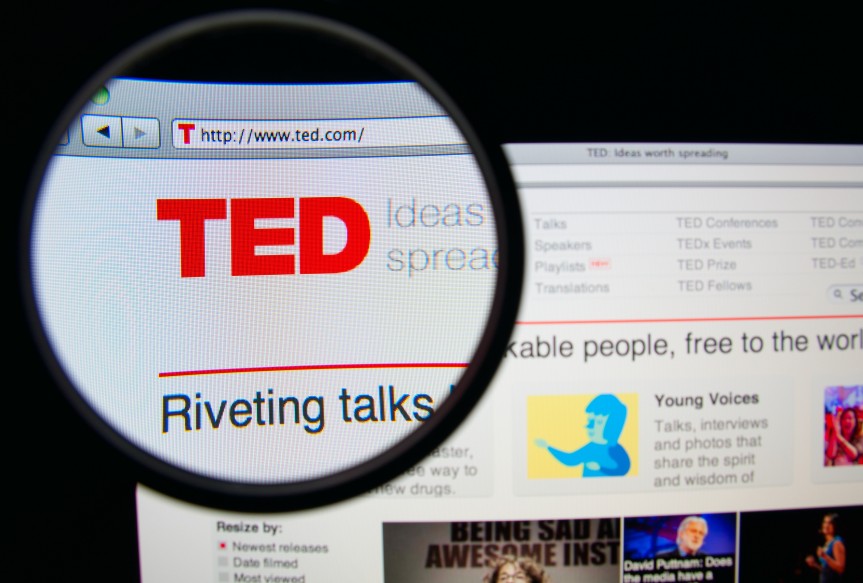 TED talks have rewritten the rules of public speaking. Carmine Gallo, author of Talk Like TED explains what makes a powerful presentation today.

“Like it or not, you’re being compared to a TED talk,” says Carmine Gallo when asked what makes a good speech. After 30 years and a global network of conferences run by the non-profit Sapling Foundation under the slogan, ‘Ideas worth spreading’, TED talks have become the new benchmark of public speaking. Gallo knows a thing or two about the format, having studied the best presentations – which have included Bill Clinton, Stephen Hawking, Arianna Huffington and Tony Robbins – for his self-help book, Talk Like TED.

“Over the past few years, when people contact me for help in developing their communication skills, they say, ‘I want to be more TED-like.’ It’s become a thing, a style that people want to be able to achieve to deliver an engaging presentation.” What is it that defines a TED talk? “It’s a more concise way of presenting,” says Gallo.

“It’s no more than 18-20 minutes, and typically no more than 10- 15 slides that utilise a very visual style with few words on screen. But the unifying factor in many outstanding TED talks is the ability of speakers to tell stories which creates a personal and entertaining presentation.”

So, with TED leading the way, has PowerPoint had its day? “In my opinion, there’s nothing wrong with PowerPoint as a tool,” says Gallo. “but you need to think about how to use it to tell a story. Old school PowerPoint doesn’t work any more. It’s too easy to open up a slide and fill it with words. Nobody likes that style of presenting, but we have all done it, falling back to the familiar approach. “Instead, make it more visual, think less text and no bullet points. Science tells us that a visual style is the best way to connect and communicate, and all the great presenters use this approach.

“In particular, millennials are a visually-led generation, and within the next decade, they will form the majority of the workforce. They are a group that has grown up with Instagram and YouTube, so they want infotainment, and that will influence business in the future. “People don’t associate storytelling with business, but it can be done to great effect and things are starting to change. I was surprised to be invited to give a talk to a group of orthodox Jews, and one of the senior rabbis pulled me aside to say that one of his congregation had suggested he needed to up his game in delivering sermons, as his audience were watching TED talks during the week. Things are changing as a result of TED!”

With the TED approach in mind, can anyone achieve success in public speaking? “Absolutely,” says Gallo. “It’s a skill that can definitely be learned. There are very few natural communicators. I studied Steve Jobs’ speeches for one of my books, and he definitely evolved as a speaker. His style was very visual, and his presentations had few words, but his TED-like approach made his product launches extremely impactful and effective. Anyone can achieve this, it just takes thought, creativity and practice.”

Having studied the most-viewed TED talks, Carmine Gallo believes great storytelling is the unifying attribute of these presentations:

1. Bryan Stevenson:We need to talk about an injustice

Filmed: March 2012 What’s the story?: Human rights lawyer Bryan Stevenson share hard truths about America’s justice system Gallo’s verdict: “Stevenson is a skilled communicator and this presentation earned him the longest standing ovation in TED history. Around 65 per cent of the content is storytelling, and Stevenson expertly interweaves data with his stories to great effect.” Watch here:

Filmed: February 2006 What’s the story?: Creativity expert Sir Ken Robinson makes the case for an education system that nurtures creativity. Gallo’s verdict: “The No.1 TED talk of all time with more than 30m views. Most would wonder why you want to watch an educator talk, but Robinson delivers a natural and humorous speech presented in a conversational style. He is very self-deprecating and authentic, and millennials in particular enjoy this style of presentation.”

Filmed: February 2009 What’s the story?: Bill Gates hopes to solve some of the world’s biggest problems using a new kind of philanthropy. Gallo’s verdict: “When Bill Gates released a jar of mosquitos live on stage at TED, it was a jaw-dropping, defining moment. He likes to do the unexpected and it’s become a technique that’s he used subsequently. What is your vision or mosquito moment? It could be leaving the stage to interact with the audience or leaving the room momentarily, but what will your audience remember about your presentation?”

4. Colonel Chris Hadfield: What I learned from going blind in space

Filmed: March 2014 What’s the story?: Retired colonel Chris Hadfield paints a vivid portrait of how to be prepared for the worst in space (and life). Gallo’s verdict: “Chris Hadfield uses 35 slides without a single word – just imagery – in a powerful speech. It demonstrates how a creative approach can be as effective as any number of facts.”

5. Sheryl Sandberg: Why we have too few women leaders

Filmed: December 2010 What’s the story?: Facebook COO offers three powerful pieces of advice for women aiming for the top. Gallo’s verdict: “A couple of years after she gave this TED talk, she revealed that originally she was going to give facts, figures and data, and that there were no personal stories in her presentation. When she arrived at the event, a friend pulled her aside and asked what was wrong, as she seemed perturbed. She explained that getting to the conference had been difficult, as her young daughter was pulling on her leg. The friend responded that her own experience was exactly what she should talk about to exemplify the struggles of working women. She says that was the moment that she realised her personal stories made a difference to the power of her presentation.”