Harrison Ford: So low before Solo by The Best You

Home Harrison Ford: So low before Solo by The Best You 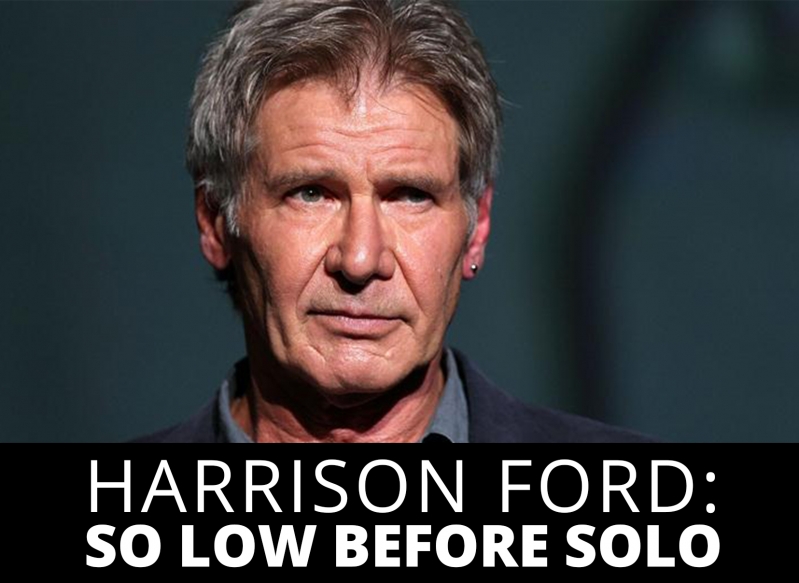 At the release of a new Star Wars movie, The Best You looks at the astonishing story of how Harrison Ford finally achieved recognition

Harrison Ford has sometimes boiled down the ingredients of his success to two things: “Persistence and luck”. But this is not the whole story. There are other elements in his story well worth considering.

Born in Chicago in 1942 to a Jewish mother, Anna Nidelman, and Irish father, Christopher Ford, a radio scriptwriter, Ford Jnr was soon made aware of the media world’s shortcomings.

“My dad would get all dressed up, go to work, come home, sit at the dinner table and bitch like crazy about those bastards at work,” he recalled. His initial instinct was to have nothing to do with entertainment, hoping instead to emulate the local coalman, because “he didn’t go home at night and tell his wife how un-cooperative the coal was”.

His mistrust of entertainers was further highlighted when he met Earl Nightingale, an actor who played children’s radio adventure hero, Sky King. While the character was strong, tall and square-jawed, the actor was short and unhandsome. Ford recalled later, “It intrigued me, how different show business was from what people thought”.

Unconventional and ironic, Ford remained unimpressed by the movies his dad took him and his younger brother Terrence to see. He was happier breeding rats, a hobby he took up, and remained intensely private and withdrawn.

At Meltzer Junior High, Chicago, aged 12, Ford acquired a reputation for aloofness – even arrogance. Quick-witted, with a sarcastic turn of phrase he made enemies of the kids in the Des Plaines gang, who beat him up day after day. After being sent tumbling down the slope by the car park, face bruised, he would climb back up and invite them to try again. His determination not to do what they wanted and fight, but to endure instead, meant they lost interest in him. His stubbornness could be a motif for his decade in Hollywood, in which he picked himself up after numerous knocks, waiting for the bad times to pass.

When Ford’s father moved into advertising, his fortunes changed. It was a far more lucrative profession during the great consumer boom of the 1950s. The family had money at last, and Ford’s later childhood was spent in a smart new estate among driven, hard-working people.

“I was taught the work ethic in its most fundamental form,” he reflects on those times. “I admire people who work hard.” He got work at this time as a cook on a yacht and later in a tobacco pipe shop, where he took up smoking.

While appreciating hard work, Ford also saw in his father’s example that it was possible to have a job that was fun and interesting and this fuelled his unconventionality. “It encouraged me not to want a ‘real’ job,” he later said.

At Maine East High School, Ford debuted on stage, dancing in Mainspring 1960, the end of year show. It was no Damascene conversion. Acting just wasn’t his thing.

Ford went on to major in philosophy at Ripon College, near Chicago, though his initial interest did not convert into good grades. As his final year loomed, he slipped into depression, struggling to get out of bed and get to classes. One time, he even dragged himself into college after days adrift, arrived at the door to the classroom, turned around and walked away.

Seeking somewhere to fit in, he stumbled upon Ripon’s theatre society. On 3 May 1963 he took his first tentative steps into acting, playing Mack The Knife in John Gay’s Threepenny Opera. Reviews were good, and Ford finally knew what direction to take.

“I had never thought about what I was going to do when I grew up,” said of his discovery. “I didn’t realise there was an option to not grow up. When I realised that, I knew I had a profession, right there.”

Ford’s talent was described by one lecturer as “virtuosic”, but it was too late to make it his major. So it was that after four years, Ford left Ripon College in 1964 with no degree – but with two more precious assets. One was the desire to act. The other was Mary Marquardt, whom he married within the year.

Luck smiled on Ford in his next career break. He immediately got work with The Belfry Players, on the shores of Lake Geneva, Wisconsin. They had lost an actor, and Ford was recommended through a friend. Experienced director William Fucik took the gamble.

Under Fucik’s guidance, Ford developed his talent. He learned stagecraft, took singing lessons and honed his skills into art. Quick-witted and lacking in vanity, teaching him was easy.

That summer, Harrison married Mary at a wedding held between performances. The first half of the honeymoon night was spent with Ford performing at the Belfry Theatre. It was an idyllic time for the couple, who relished the unconventional lifestyle.

At the end of the summer season, Fucik suggested Ford go to Hollywood to make his name. The next ten years would prove to be a long test of Ford’s self-belief, a gruelling, bruising time.

Ford entered Hollywood during the last days of the archaic studio system. It was as if the environment was designed to make the intense, personal Harrison, who was so unwilling to put up with “bullshit” or prostrate himself before studio grandees, feel out of place.

Signed on by agent Walter Beakel as a “contract man” for Colombia Studios, Ford went through acting and singing classes intended to mould him into the actor the studio wanted, suppressing his individualism and maverick nature.

“Kid, siddown. Lemme tellya a story. First time Tony Curtis ever appeared in a movie, he delivered a bag of groceries. A bag of groceries! You took one look at that person and you knew that was a star. You ain’t got it kid.”

Ford replied that he was intending to make people think he was a bellboy, not a star. The reply so incensed Tokovsky that he was sent back for six months’ further training.

Moving from Colombia to Universal Studios saw no change in Ford’s fortunes. Playing minor role after minor role in TV shows and occasional films, Ford grew increasingly demoralised. His rugged masculinity didn’t fit the required look of the time, his reticence and intenseness won him few friends. In preparation for one television role, he bought and trained a tarantula. He took it on set to use it to explain his character motivation to the director, who promptly asked him to leave. Intelligent, yet unwilling to compromise, Ford had finally had enough. In 1970, he decided to stop taking TV roles. As he put it: “If you think you’re going nowhere and you stop, then you’re not going nowhere any more.”

Instead, he set himself up as a carpenter. In Hollywood it was notoriously difficult to get decent tradesmen, and Ford worked for numerous stars, even building musician Sergio Mendes’s recording studio. Ever resourceful, he read books on carpentry from the library before commencing the day’s work. Unexpectedly his work gave him back his pride. He was no longer the cowed actor walking into an audition begging for work, but an independent, confident tradesman.

In 1972, Ford appeared in George Lucas’s second movie, American Graffiti. Lucas was part of the “new Hollywood” seeking to overturn the nepotism and favouritism of the past. Completely different to those other directors he’d worked for, Ford’s suggestions were encouraged. Though by now 30 years old, and far older than his fellow actors, he spent wild nights hell-raising – even throwing Richard Dreyfuss into the swimming pool from a second storey balcony, cutting Dreyfuss’ face in the process.

Though American Graffiti was a success, it brought no change in his fortunes and Ford returned to carpentry. A friend, Frederick Roos, pestered Lucas to audition Ford for the role of a space cowboy on his next film. When Lucas ignored him and continued auditioning, Roos asked Ford to build a new doorway in the building where Lucas was auditioning. Finding the prospect deeply humiliating, but needing the money, Ford sullenly agreed, watching as actors he knew walked in to audition. Unable to find his space cowboy, and now at his wits’ end, Lucas’s eyes finally alighted on Ford and he asked him to read the part of Han Solo for him in Star Wars.

That was the turning point. Ford was signed up, and when Star Wars became the smash movie of the year, Han Solo was singled out for special praise by critics.

Harrison Ford never looked back. After Star Wars there were numerous blockbusters. The Indiana Jones series, Blade Runner, The Witness, Frantic, Air Force One and The Crystal Skull are just a few of the films that after that one moment when George Lucas finally relented.

Ford’s persistence during almost a decade of flailing round the edges of stardom finally paid off. It is estimated that he is the most successful actor of all time, with four films in the top ten grossing films and eight in the top 50.

His journey shows that persistence and luck are only part of the story. Talent, dedication, stubbornness, intelligence, good friends who believe in you and the willingness to be resourceful are also part of the mix that took Harrison Ford to success.