Hannah Mermaid – Force of Nature by The Best You

Home Hannah Mermaid – Force of Nature by The Best You 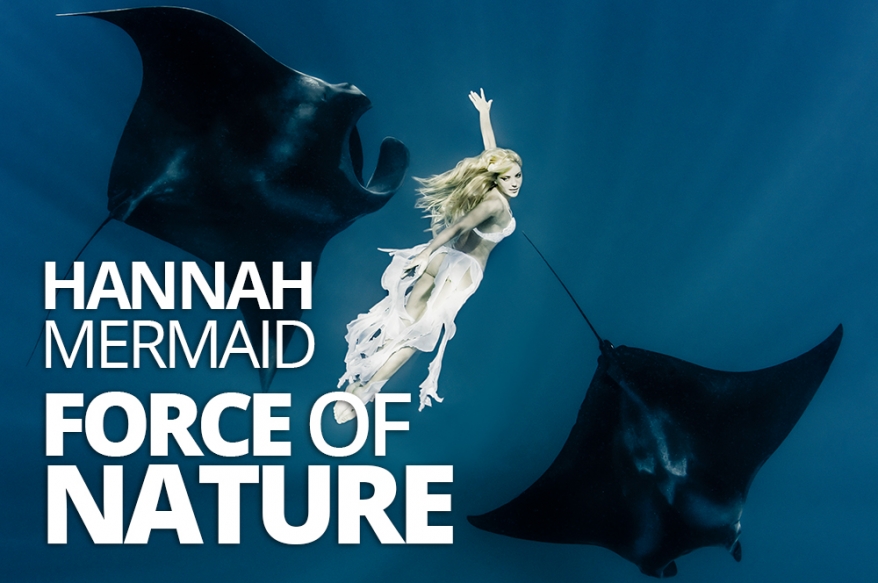 Hannah Mermaid, aka Hannah Fraser, is the first person to make a living as a full time mermaid. She tells The Best You how she came to make a unique career out of a passion for the sea – and the pros and cons of swimming with the sharks.

As far back as she can remember, Hannah Fraser was fascinated by mermaids.

“I was drawing mermaids before I drew stick figures,” she smiles. “They had mermaid tails. I went to the library as a kid, aged five, seven, looking for books on mermaids, and asking everyone where do I find them?“

At 9, she “lost her brain” when she saw the Daryl Hannah movie Splash. “I cut out every magazine picture I could of Daryl Hannah in her tail and plastered them over my wall”, she laughs.  “I was like, oh my god someone’s actually doing it, they made it real! – that’s when I made my first tail.”

A photo shows 9-year-old Hannah by the family pool in the tail, made from an orange plastic tablecloth she and her mum spent hours on. “I painted tiny gold scales all over it.”

Perhaps because her dad, Andy Fraser, was bassist with 1970s rock band Free, and her mother, Ri, was an Australian spiritual healer, Hannah was destined for unconventionality. Born in Chertsey, UK, in 1974, she grew up in L.A. Her father supplied the rebel gene and love of the spotlight, her mother encouraged creative self-expression and spiritual awareness.

Aged seven, she spent a glorious year in an Ashram in Ganeshpuri, playing with other kids in gardens among statues of ancient Indian heroes and saints, attending plays, meditations and chants.

“I learned techniques that, amazingly, set me up to be a mermaid in later life. Doing all this incredible yogic technique, breathing, chanting, meditating, gave me flexibility and a way to combat fear, learn how to be really focussed, connect into a higher source, and get my ego out of the way so I could put myself in really challenging situations and rise to them. I learnt to exist in alternative cultures and what we call normal society.”

At 9, her parents separated and she moved with her mother to Australia, where the mermaiding urge lay dormant. In her twenties, Hannah lived as an artist in Australia’s hippy central, Byron Bay, an eco-activist, performance artist and dancer, attending dance parties in the forest. Then, at 29, an epiphany occurred – she realised if she walked away from her creating visual art, she would still be worthwhile.

When she was offered an underwater modelling job she saw the pictures and thought: wow! – I am my art!

Freshly inspired, she made a tail and persuaded surfer friends to photograph her for her portfolio. Her plan? To be an underwater model… a mermaid.

For five years, she focussed on activism.  As her reputation spread, she worked with film crews and advertisers – but eco-activism remained paramount.

One film involved showing that great white sharks aren’t just killing machines, but can connect with humans. Hannah agreed to swim with them, unprotected. It tested her courage to the limits, especially when, before getting into the water, one shark wrecked the divers’ protective cage.

“Taking off into the deep endless blue, going alongside a shark, in my tail – it was like I’d left all the thought processes behind and I was entirely present. Everything slowed to absolute stillness. I was part of the eco-system. I didn’t feel threatened by the shark. That gave me confidence. I swam every day for five days.”

Once, however, a great white came at her. Completely alone and unprotected, she remembered her briefing: show it who’s boss; behave like the apex predator.

“I put my hands up, I started swimming towards it and screaming underwater. I was saying something like come on motherfucker, I’ll take you out. It just went woah, that is not dinner, and took off. After that I was kind of invincible. Like, if I can do that I can do anything in the whole wide world. I’ve scared off a great white shark!”

So, what about fear?

“There’s no space for fear in the water… Fear happens beforehand. Fear happened for two weeks solid, having nightmares about sharks and waking up with sweaty palms, and telling my mum I love you, I hope I make it back. That was where the fear was. And in the moment of putting the tail on and looking down and seeing these things in the water. When you’re in there, present, aware, you’re just completely in the flow, in the zone. Otherwise don’t get in.”

Considering the dangers of such shoots, she says: “You’ve got to do your research, you’ve got to make your plans, you’ve got to be 100% respectful of entering another animal’s environment.”

Hannah also appeared in The Cove, the 2010 Academy Award-winning documentary about the Taiji Bay dolphin slaughter. Despite threat of imprisonment, swimming in dolphin blood, beatings from fishermen (Hannah returned with severely bruised legs), and being intimidated with boat propellers, The Cove didn’t make the impact she’d hoped; most people didn’t want to watch a distressing film about dolphin slaughter.

Next, Hannah heard that the Convention on International Trade in Endangered Species (CITES) was balloting on which animals to protect. Manta rays were overfished, yet ignored. “We realised mantas had a very limited time frame to get on to the ballot.”

The resulting publicity shoot, off Hawaii, was like nothing she’d done before. Hannah was 30 feet down, weighted to the bottom of the ocean, in a powerful swell:

“I take the mask off and it’s dark, so all I can see is a trio of lights shining from the surface, and bright lights from the bottom – I couldn’t see the safety divers or photographers. I was alone in the blackness, holding my breath. Trying not to die, basically… There were viper eels wrapped around my legs. I’m in this weird semi-freaked-out state… with absolute trust that someone will bring me air when I ask for it. Then the manta rays came in, and when they started interacting with me, it’s like nothing else exists. I am literally having my own close encounters of the third kind experience. There’s these alien spaceship lights, then there’s these huge flying things sweeping over my head, and I can touch them. I think about it and I think did I really do that? It’s so surreal.”

Then, the swell lifted her dress over her head and support divers scrabbled to her with air. For long seconds, it was touch and go…

It was worth it. After the film was shown to  CITES delegates, 80% voted for manta ray protection.

A tiger shark shoot in the Bahamas followed, after the Australian government announced a tiger shark cull to protect tourists – despite no recorded attacks. Hannah is quick to say hers was only one action among many, but the video garnered massive media coverage. The legislation was overturned.

Hannah says: “Humans kill one hundred million sharks a year. Sharks kill 10 humans. Out of all the animals I swam with in the ocean, these apex predators were the only ones that came back time and again for physical connection. I could feel their massive muscles flexing. I even tickled one on the nose, and it seemed to enjoy it!”

It was extremely dangerous, but pulling off a shoot with so many logistical challenges was deeply personally rewarding.

Hannah’s art provides a bridge of understanding between humans and animals. So, how does she sum up her job as the world’s first full-time professional mermaid?

“When you’ve got pounds of weights stuffed into your bikini and you’re holding your breath until you feel like your lungs will burst, you’re freezing cold, shivering – hypothermic and in fear of your life – and you can make it look like you’re effortlessly dancing – that’s what I do!”

To find out more about Hannah Mermaid, visit hannahfraser.com/mermaid