Hang in there by Gerry Robert

Home Hang in there by Gerry Robert 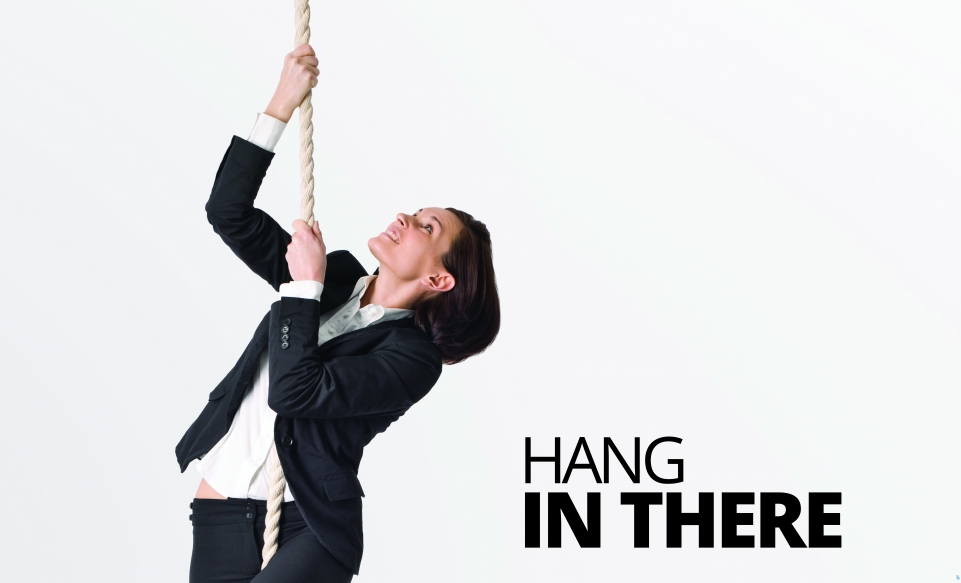 You can practice perspective by changing the way you interpret your circumstance, situations, and environments. The task is not to see a new world but to see the world with new eyes. The person who can change the way they view their world will win without fail.

A stranger chanced upon several workers in a small town in Italy. Curious and interested, he began to inquire from the workers as to what they were doing. “I’m laying bricks”, said the first worker. After a few minutes of idle chat, he asked of another, “What are you doing? Laying bricks, eh?” The other worker, somewhat indignantly responded, with shoulders straight and firmness of voice, “Laying bricks? No, sir. I am building a cathedral.”

Both workers were working on the same job. One saw his tasks as laying brick upon brick upon brick, while the other one saw a work being offered to the Glory of God. Two people, two perspectives! Why is it that some people choose to see the worst in a situation while others choose to see the best in the same situation? Which one do you think will succeed further on this great journey we’re on?

Everyone has obstacles. Everyone needs perspective in the face of those challenges. Your response to dealing with the storms of life will dictate the results you achieve. What follows is practical solutions to dealing with those times in life when everything seems to be going the opposite to your preferences.

Hang In There and Learn

Challenges of life will come. Everywhere else will be hit by the storms of life. If you remember that there is something to learn in every problem, then you can learn to grow by the storms rather than being crushed by them.

Take a good look at the obstacles in your path. Instead of cursing them and wishing them away, ask yourself what you can learn from your situation. How can you become a better person through them? Someone once said that we go on experiencing life’s lessons until we learn what we need to learn, then we can move on. Remember, above every stormy cloud is a bright sun, which never fades.

Hang In There and Find the Gem

There are two sides to every coin. The Chinese call this the Yin/Yang principle. Every negative has a positive opposite. You just have to look for it. One person’s disaster will become the vehicle for another person to become wealthy.

During the Great Depression, not everyone went belly-up. Some people actually became rich. When you see a problem, you also need to see an opportunity. One of the fastest ways to become wealthy is to solve someone’s problems or difficulties.

Many successful businesses today have been born out of someone’s problem. Take the man who took surplus sawdust from the lumber mills free of charge and formulated several wood-burning products from it. He saw that lumber yards had a problem with excess sawdust. They didn’t know what to do with it. He acted and began a wonderful business.

Hang In There and Be Patient

Every problem will go away. Either it will change or you will. No problem is permanent. Worry is useless. Instead, of being ready to give in, just remember that every problem has a limited lifespan. Things will get better. Seek to grow.

How about the Berlin Wall? Who could have guessed that within days it could be demolished. Within weeks, Communism would crumble. A problem which many people feared would plague the earth for centuries disappeared in a flash.

Hang In There and Think

There are no problems, there’s only a shortage of ideas. Problems are not the problem. Ideas are the problem. Every single problem, challenge, or storm you face today has as its solution an idea waiting to be used. If you could only understand that the only thing standing between your current problem and the wiping away of it is nothing but an idea.

So, get your eyes off your problems and onto the solution. You may not be able to do anything about what has happened, but you surely can and should do something about finding a solution. That solution may seem like a fantasy right now, but keep in mind that the airplane was nothing but a fantasy until two brothers starting searching for ideas to solve their fantasy.

Hang In There and Be Grateful

Even the most together people have storms to face. In fact, the people who are winning the most in life often have the biggest challenges in front of them. The people who win the most in life are often the biggest risk-takers. Since you’re not alone, why not align yourself with others who may be facing what you are facing. You could perhaps solve your problems together. Never forget that the greater the obstacle, the greater the opportunity.

Gerry Robert is the international bestselling author of The Millionaire Mindset. Gerry has been working in marketing his entire career and has a wealth of experience to bring to the table. Gerry brought himself out of poverty to earning over $1Million in a single year. Now he’s a mentor to some of the highest income earners in numerous industries. He cares about people and is great at what he does. His ideas are not conventional. He is provocative and innovative. He gives practical ideas and strategies to build almost any business. He is the father of three boys and married for over 20 years to Anne, his teenage sweetheart. He is also a former minister.
http://gerryrobert.com