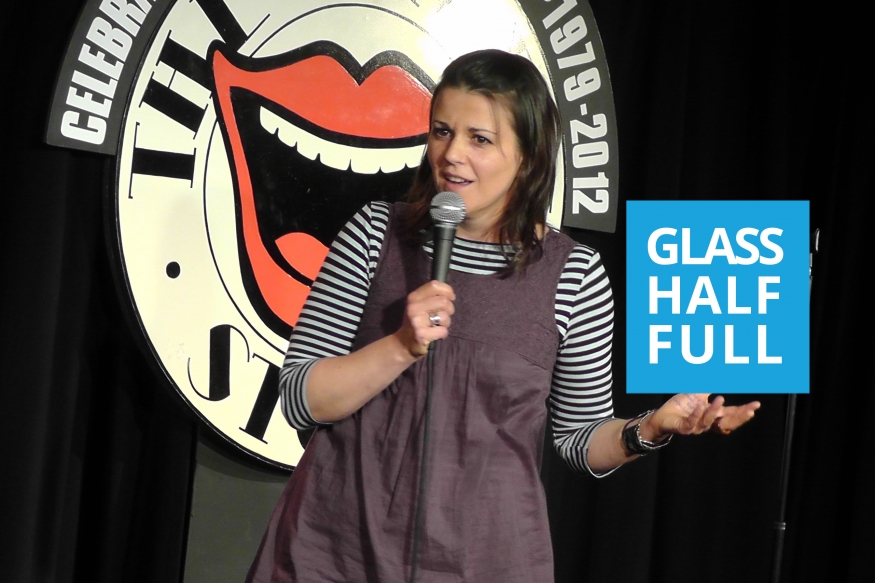 Juliet Stephens is a stand-up comedian and journalist who also happens to have epilepsy. Here she shares her experience of living with the condition

My name is Juliet and I have epilepsy – waits for supportive round of applause from others in the help group… No? Oh, ok. In one of my guises as a stand-up comic, I explain to audiences that I have tonic clonic epilepsy, and that I affectionately refer to my seizures as ‘gin and tonic colonics’ because of how they make me feel afterwards… (there’s some artistic license here – actually I feel incredibly serene after a seizure). Now I’m certainly no expert on neurology or science, but I have lived with my epilepsy for more than half my life. I say ‘my’ epilepsy as what strikes me is how very personal epilepsy is. Not just in the nature, frequency and severity of seizures, nor even the experience of different medications. For me, the most personal aspect is the relationship with epilepsy itself. I have the most common form of generalised epilepsy – idiopathic generalised tonic clonic seizures. The ‘idiopathic’, or ‘of unknown cause’ part has, for me, been the most frustrating thing to deal with. I had kidney failure as a child, is it connected to my adolescent-onset epilepsy? We don’t know. Is there any physiological cause? We don’t know.

Might I grow out of having seizures? We don’t know. If I change my medication might I experience awful side effects? We don’t know. Hmmmm. Frustrating. My journey to understand my epilepsy has taken me through, in no particular order, denial, frustration, vulnerability, sadness, anger and sometimes even joy. Yes, joy. Without epilepsy I would not have the insight that I do into the kindness of strangers that I have so often depended on, the fine work of the ambulance service and hospital staff, the support and love from friends and family, the miracle and complexity of the human brain, the hard work of researchers to understand the brain, the mutual support from other people with epilepsy at meetings and in online chatrooms, and the dedication of individuals who run marathons, bake cakes, shave their heads and do parachute jumps to raise money for various epilepsy charities. It is often said that the worst thing is not knowing and I would agree – it makes you powerless. Like many people, I have no prior warning if I am about to have a seizure, so only find out after the event (sometimes a long while after, depending on how many seizures I have had and if I was alone at the time).

This can be really terrifying. The best solution I have come up with is to try and understand my epilepsy and resign myself that if I have to live with not knowing, I would rather live in a general state of positivity which may be interrupted by seizures, than a perpetual state of fearful paranoia. I choose to be as ok as possible with not knowing. I have learned a respect for my body, which has healed itself so admirably after I have been injured during a seizure, and actually I have come to enjoy my cuts, scars, burns and grazes as they present a living testimony to my epilepsy. ‘The scar on my nose is from a seizure in the office… the piece of tarmac in my chin was accidentally left there after I was stitched up following a seizure in Tasmania… the burn on the back of my leg is from a hot water bottle I was unconsciously lying on after a seizure…’ etc. I now work as a journalist, writer and stand-up comic and yes, I do talk about epilepsy on stage. The relationship between comedy and epilepsy is a complex and often contentious one. People’s individual relationship with their epilepsy affects how appropriate they feel it is to make jokes about it.

I can only speak from my own experience and for me comedy is a crucial coping mechanism. Quite often I will be approached after a gig by a fellow act or audience member who tell me about their own experience of epilepsy. I find it a great opportunity to engage with people and de-bunk some long held myths. Sometimes it can be surprising how much ignorance is still out there, but thankfully I’ve not yet had a crowd of angry villagers cry out for the ducking stool. It’s been some nine months since my last seizure (in a comedy club – definitely not part of my act!). I keep taking medication, ensuring I rest if I need to and making certain people in my life know what to do should I have a seizure. If I do have another seizure, well, I’ll just have to recover, reassess my meds with my neurologist and carry on. Life is precious and short – too precious and too short not to enjoy!

(CTA) To find out more about the Epilepsy Society, visit epilepsysociety.org.uk