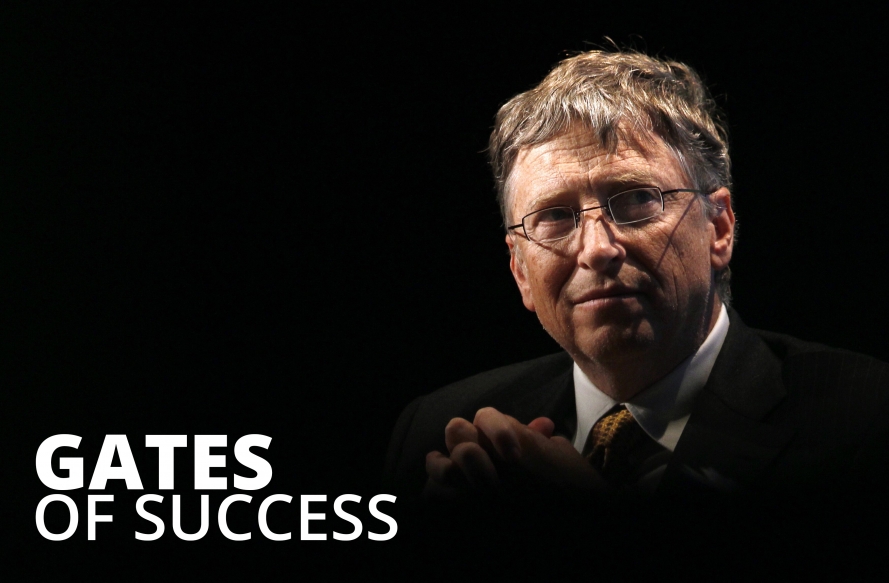 The Best You discovers the character traits of the world’s wealthiest man, computer genius, and philanthropist Bill Gates.

When William Henry Gates III was born in 1955, the Computer Age was just sparking into life. Back then, a few huge computers were confined to university campuses and big businesses. Their future as a tool for “every desk in every home” would be inextricably linked with the second child of a banker and schoolteacher from Seattle.

Early on, his grandmother Adelle taught him bridge and other card games, nicknaming him Trey (“Three” in card-speak because he was William Gates III), instilling in him a love of competition and enjoining him to use his brains. “Think smart! Think smart,” she repeatedly told him as they played.

From board games to jigsaw puzzle competitions to cards, Bill grew up amidst benign rivalry. The family played cards after dinner to decide who would wash the dishes. Even the announcement by his parents of a new member of the family came in the form of a game of hangman; the letters spelling out: “A little visitor is coming soon.”

At school, Gates recalls: “My desk was always messy, and I didn’t seem to be paying attention. I was always out there on the playground… sort of laughing about something when you weren’t supposed to be laughing.” Unsurprisingly, his favourite subjects were maths and science.

As one of the youngest kids in his grade, Bill was physically small, but intellectually precocious. By the age of nine, he had read The World Book encyclopaedia from A to Z. He would criticise his parents who tried to hurry him when he was late for events, saying exasperatedly: “I’m thinking. I’m thinking.” As his dad recalls: “It was worse than that. He’d chastise us. ‘Don’t you ever think?’ We didn’t have a good answer to that: We weren’t sure we ever did!”
In 1967, his parents took the life-changing decision to enrol him at the exclusive Lakeside private school, which was well-used to instilling discipline into intelligent but unruly boys. Here, his intellect found its focus: computing.
From the moment he was introduced to the General Electric Mark II computer, Gates was hooked. His maths teacher Paul Stocklin recalls that when he introduced the class to the new machine, he gave them a talk about how it worked. “That was the last time I knew more than those guys.”

Gates obsessed about the computer, demanding to use it. Renowned even then for his impatience with others, often shouting down classmates’ suggestions with the phrase “That’s the stupidest thing I ever heard,” he mastered the computer language BASIC on the school machine. He would later exploit in his own software.
Hungry for more computing time, Gates jumped at the chance of helping debug a computer for a local company in exchange for free time. When the trial came to an end and the schoolkids were asked to pay to use the system, Gates became involved in hacked the user records to knock the bill down.

For his initiative, he was banned for the summer from computing, which for him was an unbearable punishment. He was livid when he discovered a friend had had access to another computer through his father during that time. After the ban ended, Gates started computing again, helping create the school’s class scheduling system while he was still a pupil, enabling him to set up classes in which he was “the only boy in a room of the best girls.”
After Lakeside, Gates enrolled at Harvard, but dropped out and started his own software business with friend Paul Allen. Their major breakthrough came in 1975 when electronics company Altair produced an early home computer, but no operating system. Gates saw the gap in the market and promised Altair an OS. With this first BASIC OS, Gates’s fortunes slowly began to rise.
Times were not easy at first. Arguments raged with Altair over licensing, taking Microsoft to the edge of bankruptcy. But the fledgling company was saved from deeper financial problems by a cheque from Apple Computers for supply of the BASIC OS for the Apple II.

His ability to speak to businesspeople and sell his product was perhaps not an obvious skill for someone who was not overly strong with “soft skills.” But Gates’s utter conviction shone through in corporate boardrooms, despite appearing to be just any scruffy teenaged kid.
Through the second half of the 1970s, Gates and Allen grew Microsoft. Problems with piracy and royalty payments in the early days prompted Gates to sell software licenses to computer makers for a flat fee, meaning he could sell the same software again and again to different companies with no worries about royalties if a company folded.
He used this strategy when Microsoft was asked by IBM to provide an operating system for their new personal computer, which he called PC-DOS. Gates guessed that the IBM PC would be cloned by numerous other companies, enabling him to sell MS-DOS repeatedly. From this point on, Microsoft began to dominate the home PC market.
Steve Jobs once said of friend and rival: “He was always looking for a new paradigm to open a new market.”
This was certainly the case with Apple. Having provided the software for the Apple II computer in 1979, Gates later designed numerous programs for the Macintosh, thus entering Microsoft into creating the new-style Graphic User Interface programs. This step came to fruition with the introduction of Windows in 1985. Through Windows, Microsoft came to dominate the PC software market, taking a massive 90% market share of personal computer operating systems.
Ever a workaholic, Gates continued to write code for Windows up to 1989, when he took a more executive role. Today, having stepped back from day-to-day running of Microsoft, he remains its chairman and is the world’s wealthiest man with an estimated personal fortune of $76.8 billion.
Besides his massive intelligence and competitiveness, Gates’s other character traits no doubt contributed to his success. Some are surprising and not the classic characteristics so many personal development manuals speak of. When younger he was insecure, impatient, rude and had a devil-may-care attitude.
He often over-inflated his achievements, for example claiming to have run 13 businesses that went bankrupt before starting Microsoft – a pure invention.

His ruthless put-downs of “stupid” classmates at school continued into adulthood with an abrasive management style. Uncompromising with staff, highly critical, sarcastic and ruthless, Gates believed that through strong criticism they would redouble their efforts.

Gates was also a dedicated thrill-seeker. Before going to Harvard he broke his leg in a water-skiing accident and was ordered by a doctor to take six weeks rest. Three weeks later, he turned up with his cast removed sporting a hideously bruised leg, and through force of personality persuaded the boat driver to take him out on the water again. The same impulse led him to buy a Porsche that he complained would only get up to 121 mph, despite the manual claiming it could do 126. He amassed countless fines and, famously, was once arrested for speeding.
Throughout his life, his obsessive intensity has worked in his favour. Numerous times he would promise delivery of a project before it had even been started, then work day and night to deliver it. His work ethic and those of the programmers he hired was “hardcore,” with late night programming sessions and a “seven-hour turnaround” from leaving the office to returning to it, leaving no room for relationships, or even watching a movie.
Eventually, however, Bill Gates found time for love, and in 1994 he married his wife Melinda and is now a father of three.
Since then, new aspects of his personality have emerged. He studied the works of Andrew Carnegie and John D Rockefeller, whose philanthropy inspired him to investigate how to use his great wealth to improve others’ lives. Gates met Rockefeller on numerous occasions, and in 2000 he and his wife formed the Bill and Melinda Gates Foundation, which focuses on global problems ignored by governments and other aid organisations. Today, it is the largest transparently-operated charitable foundation in the world.

By 2007, Bill and Melinda Gates had become the second-most generous philanthropists in the US, having donated over $28 billion to charity. In 2010, along with investor Warren Buffett and Facebook CEO Mark Zuckerberg, Gates signed the “Gates-Buffett Giving Pledge,” promising to donate at least half his wealth to charity during his lifetime. The Gateses’ avowed aim is to give 95% of their massive fortune to good causes.
Even today, Gates still has some of the social awkwardness for which he was famed and lampooned when younger. But behind all this, there is a brilliant tactician keen to achieve his goals quickly, and a man who has mellowed with age to see his significance in the world.
A well-known saying wrongly attributed to Gates says: “Be nice to nerds. Chances are you’ll end up working for them. We all could.”
Although the quote first appeared in a book by Charles J Sykes, the fact that so many are willing attribute it to Gates speaks plenty about the man.
As the embodiment of the “nerd entrepreneur,” perhaps it’s a phrase he should have coined.