From the street to Selfridges by Jemal Peters

Home From the street to Selfridges by Jemal Peters 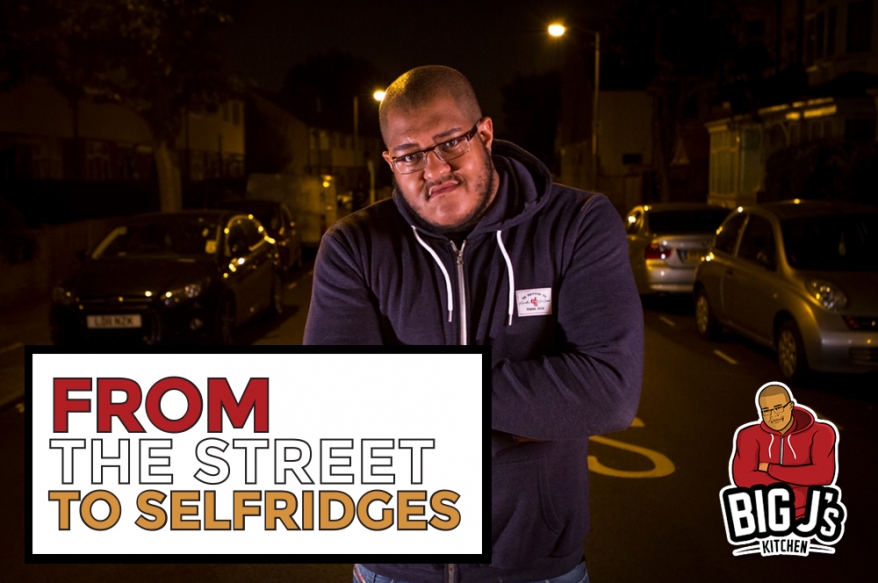 Entrepreneurs come from all walks of life, and if you don’t believe it, meet Jemal Peters whose Big J’s Kitchen range of condiments is the result of one man following a passion.

Life didn’t deal Peters the easiest start – his father left when he was just seven, and at ten his mother became seriously ill meaning the family lived on benefits. Most days he went to school with no lunch or money to buy food, and he started to dabble in crime selling weed and committing robberies. Seeing the street as the place to create a living and provide for his mother, a defining moment came when, on his 16th birthday, he was arrested and spent the day in a cell. Despite attempting to get various jobs, for the following five years he dabbled in crime, but it was the birth of his daughter which was pivotal to his decision to move on from the street.

He started to build a career in the youth work industry, but in 2012 he decided to launch his own business and create his own food brand. “Food was always the centre of our household, and was something that brought us together,” Peters explains. A speculative email to Dragons’ Den star Sarah Willingham led to investment and a series of breaks enabling him to provide his condiments to London restaurants and Selfridges.

“People are surprised, but one thing that makes the product real is that it’s organic and from the real world, it’s not created by some big corporation,” says Peters with justifiable pride. The other win from Peters’ business model is that he contributes a portion of Big J’s annual profits to his OR? Project, which helps young offenders or those at risk of offending to go into business.

“It helps to get us forwards,” says Peter, “and doing something more. We’re putting help back into the community which is where we can make a real difference to the lives of people who wouldn’t ordinarily think about or get a chance to create a business for themselves.”

In fact, Peters says that his entrepreneurial skills were learnt on the street, although he didn’t realise it at the time. “The crazy thing is, the skills I learnt on the streets is what I carried through to the business world,” he adds. “From the motivation, to marketing, dealing with customers, breaking down profit and losses and more.”

The OR? Project aims to make radical and lasting change to the lives of those it touches. “We’re not about looking good, but about real, direct action,” says Peters. “Even if we only work with ten people in a year and move them from the street environment, it’s enough of a success for me. Kids think they can only benefit from crime, and so if we can transform their mindset to believe they can do better, it’s worth it.”

Peters’ latest venture is to take this experience once step further by working with a group of young people to start a new business with just £250. “It’s the same amount of money they’d spend on trainers or jeans, but I want to show them how they can grow a future with that kind of investment. We’re starting with wraps and showing them how to build a business from the ground up, with PR, social media, leafleting and digital activity. I want to show people it can be done.”

For Big J’s Kitchen too, Peters has plans to grow the brand with growth of the company’s manufacturing and logistics. It’s a long way from the streets, and Peters is an inspiration to anyone who’s ever thought, ‘What if…’ “I always had a little niggle in me knowing that I was better a life of living off crime,” he says. “I knew I had to get out, but it was my daughter’s birth that forced me to act. She’s now ten, and it’s been hard work but I’m proud of what we’ve achieved with Big K’s Kitchen and the work we’re doing to make a difference to the community.”

To find out more visit bigjskitchen.com