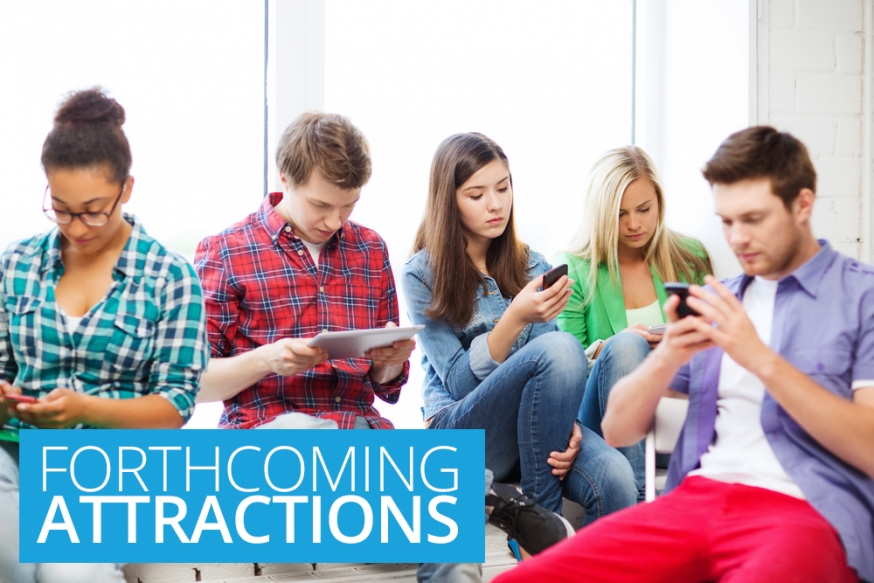 During the summer, tech companies float some of their new products and prototypes at conferences, which are a great place to test the pulse of tech-savvy consumers. Bryan Szabo looks at some of these products. Some of them are hitting the market now; others are still being developed.

While mobile devices have made personal and business mobility a reality, powering these devices has largely left us tethered to wall sockets, computers, or any of the other places we can plug in our devices. The makers of the Powermat recharging pads believe that mobile users should not have to ration their power usage through the day. Claiming to do for power what WiFi did for data, Powermat could represent a big leap forward for charging. The two-pronged power outlet dates from 1895; Powermat is promising to bring power into the twenty-first century. Thanks to a partnership with Starbucks, we might be seeing the Powermat recharging stations in the ubiquitous coffeehouses very soon.

Most external hard drives are clunky objects that users tend to tuck away in drawers or hide behind their hardware. Leave it to the French to wed function with design in an external hard drive that looks just as much at home on a pedestal as it does on your desk. LaCie contributes the hardware (1TB of memory and an ultra-fast USB 3.0 connection), and Parisian silversmiths Chirstofle wrap it in silver plate. This is not, to be clear, a technological leap forward; it is, however, a marvel to behold.

Audi A7 (with piloted driving)

Google’s autonomous vehicles have dominated much of the conversation surrounding the future of hands-off urban transportation. Though the technology has come a long way, Google’s roof-mounted sensor array doesn’t exactly have the buying public champing at the bit. Audi recently unveiled a prototype of their contribution to the conversation, and though there is still a ways to go before any of these cars go into production, Audi’s discreet (almost invisible) sensors made the piloted driving-equipped A7 a hit at this summer’s tech orgies. Of particular interest: the valet feature, which will park the car in the nearest parking garage and pick up the driver at curbside when they’re ready to get back on the road.

High-end loudspeaker design has long been the domain in which technophiles and audiophiles converge (and frequently argue). There’s enough here to satisfy both camps completely. The reviewers have each tried to outdo each other with their descriptions. Hearing the Sasha II for the first time is like the first time you ever drove a sports car. No, it’s like the first time you kissed a girl (almost all the reviewers are straight males). No, it’s like hearing the voice of God. With such a surplus of superlatives, the five-digit price tag might just be worth it.

This may be the final word in lifestyle action cameras. This one-inch rubber cube is shockproof, weatherproof, and it can, they promise, handle whatever you want to throw at it. As you would expect from a Polaroid product, it can take still photos, but its ultimate application – thanks to its durable rubber exterior, its featherweight design, and its 124-degree wide-angle lens – is action video. Whether you’re a skateboarder, a hand-glider, a mountain climber, or a cyclist, the Polaroid Cube is a great way for you to capture your latest adventure. Mounting options are almost infinite: helmet mounts, bicycle mounts, tripods, and strap mounts that can be worn on the wrist or around anything else you can think of.

As far as utilitarian tech goes, you’ll probably want to look elsewhere. Though its functions are limited, the CLM2 is one of those pieces of technology that, no matter how practically useless, makes beholders ask, “How much?” The newest iteration of the device can levitate as much as 20 pounds. One particularly clever user concealed the device within a cabinet and turned a hardcover book into a floating platform, upon which he stacked a small handful of books. The pile of books spins and levitates a few inches above the cabinet. Crealev charges £690 for their levitating smartphone display, which holds a quarter of the weight of the CLM2, so be prepared for a hefty price tag.

Apple’s recent announcement of a new product category added a degree of excitement to its latest iPhone launch. Bucking Apple’s prevailing naming trend, they went with Apple Watch. The device won’t be available until early next year, but, if the prototypes they floated at the release are any indication, the device will be available in 38mm and 42mm versions and there will be wide range of interchangeable strap options in steel, rubber, leather, and, of course, gold as well. The device will allow you to monitor your fitness, sync with your iPhone (5 or later), and it boasts the new Apple Pay feature, which, in time, should allow you to pay retailers by swiping your watch. It also tells the time.