Home Follow Your Dream: An interview with Tim Lovejoy 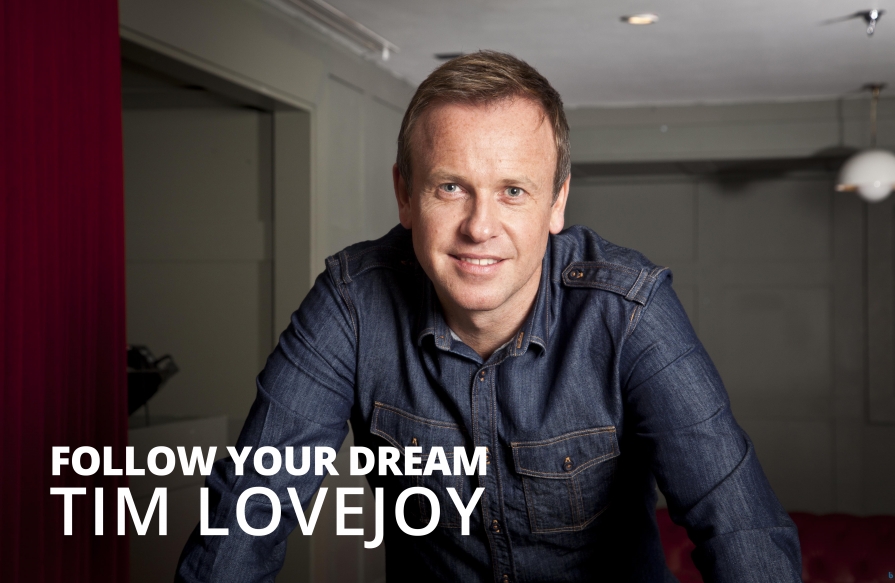 As one-time producer of The Big Break Breakfast, producer and presenter on Sky’s Soccer AM and current host of Channel 4’s Sunday Brunch, Tim Lovejoy is enjoying the success that comes from years in the TV business. So how did he get there? And what qualities did he need to succeed? Bernardo Moya finds out.

If you can say anything about Tim Lovejoy, it’s that he’s got determination and motivation. These qualities have been with him throughout his career as a TV presenter on some of the UK’s favourite shows.

His younger days, however, were a different matter. School was “a chance to play football”, he says disparagingly, remembering how he left school as soon as he got his six “O” Levels. And yes, he did attend a college afterwards, but he remembers he was out meeting girls and going to too many parties to apply himself.

In fact, one day, his dad said to him: “Tim, I’d like to have a chat with you. We went up to your open evening today at your college… The teacher said he would love to meet you one day.”

It was not the start of a family bust-up, however. Following his dad’s advice, Tim set to work in a clothing shop. But as a young man with an imagination and a creative streak he couldn’t settle in retail. It was the 1980s when the world of finance and exciting deals in the City were in the news, and Tim felt the call of high finance. His primary drive back then, he recalls, was to make some money.

“Everyone was going ‘Commission, if you get commission you’re going to make a fortune’. So I got myself a job at Allied Dunbar.”

As a 19-year-old, selling mortgages at the height of the ’80s boom was quite a responsible job for one so young. As a people person Tim’s concern was that his clients could afford it rather than mortgage themselves to the hilt – a very different priority to that of his firm. “I’m not saying they were criminals… but there was a definite ‘Hold on, this one gets us a lot of commission.’ You know what I mean?” He may have been the youngest sales associate at Allied Dunbar, but he was most definitely not the happiest.

Life changed when a stranger sat with him and his friend at a club and asked him why looked so unhappy. Tim answered that he had to go to work the following day. It was then that this stranger gave him advice that sounds, as Tim concedes, like it was straight from a Hollywood movie:

“‘Listen, my friend”, he said, ‘Take my advice. I’m in my thirties, I’m going through a divorce, I hate my job and I don’t have any chances… Put your work and your effort into following your dream because otherwise if you’re just going for money at your age like I did, you might end up like me. Follow your dream.’”

Cheesy or not, the encounter really happened – and it had a profound effect. “I went away and… I was miserable at the time, it really struck me and I thought, right, what is my dream?” A few days later a friend of his reminded him that he had always wanted to be a radio DJ. “I’d always wanted to work in media and TV and radio and things like that, and it kind of clicked… that was what my dream was as a kid. It was either that or an astronaut and I wasn’t going to be an astronaut, so why not go for media?”

With that realisation in place, Tim started going for work on radio. His dedication was unstoppable.

To earn money he took any work he could get. He DJ-ed in clubs and became the “swag man” going on tour with bands and selling t-shirts. He worked in bars and restaurants and told his dad and his friends he was going to be a TV presenter.

But how was he going to do it? The fact was he spent every spare penny on hiring a cameraman and sound man and producing show reels. He’d turn up at a movie premiere with his crew and pass himself off as a real reporter for a cable TV company. Then he’d get the show reels mastered and send them off, asking for work.

“I’ve got a file at home with 250 rejection letters in it, some of the people I actually ended up work with, bizarrely. All standard letters saying, ‘No thank you, sir…’ I was just determined.”

Then, one day Brian Diamond at MTV allowed him to do a week as a stand-in presenter. It was not a success. “I was hopeless, it has to be said,” Tim confesses. But not long after this he received some really great advice from an agent. He told him to get some experience behind the camera.

“Now what he was really saying was ‘You’re not a very good TV presenter. Go and work behind the scenes.’ But what I took it as was, ‘He thinks I’m brilliant but I’ve got go get a bit of work behind the cameras.’”

It was then that he got work as researcher on “The Big Breakfast”, and because of the turnover of staff leaving to go to other jobs, within two years he was producing a national TV show.

From there, he moved to Sky Sports where they gave him the opportunity to become the producer and presenter on “Soccer AM”, which he did for 11 years. It was here that he really learned his craft as a presenter and interviewer. And then he had great success with “Something for the Weekend” for the BBC and “Sunday Brunch” on Channel 4. So what does it take to become a great presenter?

“I spend a good two and a half hours on a Saturday researching, reading up on all the guests, knowing everything about them and knowing what I’m going to talk to them about and doing it. So when you go into a show you can ad lib because you know what’s coming up and what’s happening.”

For Tim, with his repeated sending of letters and showreels to people in the business from an early age, the secret of success is no secret at all. It is clear determination and application.

He gives three examples of people from very different backgrounds whom he has met, and who all follow the same rule. Footballer David Beckham, rock star Noel Gallagher and film actor Ray Winston.

It’s this quality of dedication, determination and hard work that Tim believes led him to his success as well.

“All these guys have the same thing in common, they’ve worked hard and they’ve prepped and they know their art. I wouldn’t put myself in the same category as those three but whenever I do an interview I’ll prep the hell out of it. Before I walk into any TV show I know everything there is on every clip, every guest, every item we’re showing how to cook and everything because I think you’ve got to have that knowledge and that’s what I do when I walk into a TV set so that people can rely on me.”

It’s clear from his story that Tim didn’t only follow his dream. He tracked it and pursued it with dogged determination bordering on obsessiveness for years. Brimming with youthful self-belief, he made mistakes and continually set himself back on the course for him. At 45 he has just started a new venture, hosting “BT Sport” – a TV show with a format similar to his earlier “Soccer AM”. He is sure that he has plenty more to offer, and so much more to do. And with his determination in play, we’re sure it’s only a matter of time!

Tim Lovejoy is a television presenter, most famous for the cult Saturday morning show broadcast on Sky Sports, 'Soccer AM'. He is the creator of many of the comic sketches and gags for the show that has made him famous. Tim began work in the music industry, as a merchandise manager for touring bands. He then moved on to work at the MTV music channel. 'The Big Breakfast' was his next venture as he joined as a researcher but went on to become the producer. In 1996 he became co-host of 'Soccer AM' with Helen Chamberlain until the end of the 11th season of the show, when he left. He then went on to host 'David Beckham's Soccer USA' on 'five'. He has hosted a radio show on the London radio station 'Xfm' befor he moved onto a sunday morning slot on 'Virgin' radio. His latest tv venture is the entertainment chat-show, 'Time Lovejoy and The All-Stars' in which he interviewed celbrities and presented musical performances from top bands such as 'Manic Street Preachers' and 'Embrace'. He also did the voiceovers for the first series of football talent show 'Football Icon' and recently became a host of motoring show '5th Gear'. Tim also hosts the show 'Something For The Weekend' on sunday mornings with Amanda Hamilton.
http://www.tim-lovejoy.co.uk/