Tim Lovejoy is a television presenter, most famous for the cult Saturday morning show broadcast on Sky Sports, 'Soccer AM'. He is the creator of many of the comic sketches and gags for the show that has made him famous.
Tim began work in the music industry, as a merchandise manager for touring bands. He then moved on to work at the MTV music channel. 'The Big Breakfast' was his next venture as he joined as a researcher but went on to become the producer. In 1996 he became co-host of 'Soccer AM' with Helen Chamberlain until the end of the 11th season of the show, when he left. He then went on to host 'David Beckham's Soccer USA' on 'five'.
He has hosted a radio show on the London radio station 'Xfm' befor he moved onto a sunday morning slot on 'Virgin' radio. His latest tv venture is the entertainment chat-show, 'Time Lovejoy and The All-Stars' in which he interviewed celbrities and presented musical performances from top bands such as 'Manic Street Preachers' and 'Embrace'.
He also did the voiceovers for the first series of football talent show 'Football Icon' and recently became a host of motoring show '5th Gear'. Tim also hosts the show 'Something For The Weekend' on sunday mornings with Amanda Hamilton. 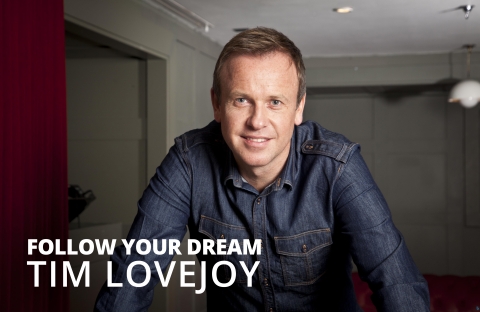 As one-time producer of The Big Break Breakfast, producer and presenter on Sky’s Soccer AM and current host...