First lady of the world by The Best You

Home First lady of the world by The Best You 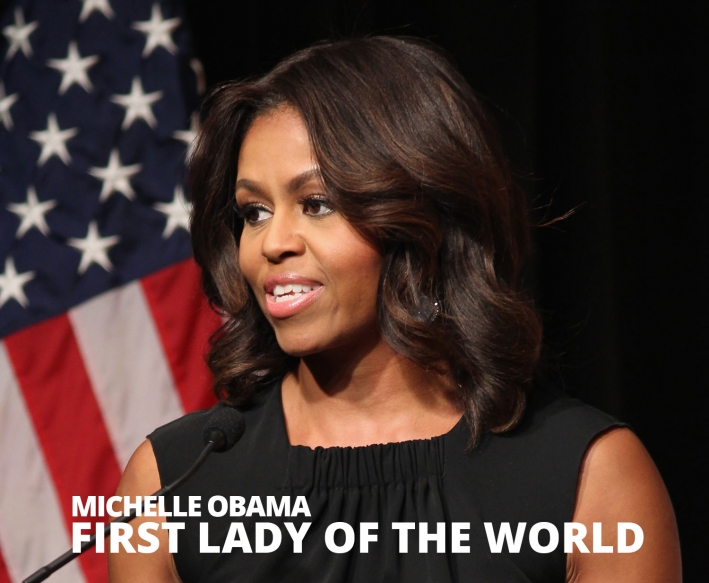 Michelle Obama’s story is not the common political tale of the well-connected woman born into a politically active family. Her story is different – one that in many ways supports the idea of the American Dream. The Best You finds out more.

Born in 1964 the daughter of a water plant employee and a home-maker, Michelle Robinson grew up in a small apartment with her family in the South Side of Chicago – one of the largest concentrations of disadvantaged African-Americans in the country.

She grew up in the era of the Civil Rights Movement, and one of her best friends was Santita Jackson, daughter of the famous activist and politician Jesse Jackson.

Her family was poor. Her father, Fraser Robinson, did shiftwork as a city employee while her mother, Marian, stayed home to look after the kids. Michelle says of this time: “The only amazing thing about my life is that a man like my father could raise a family of four on a single city worker’s salary.”

Despite their poverty, Michelle’s parents provided the best start they could for their kids. Michelle’s older brother, Craig Robinson, reflects: “When you grow up as black kids in a white world, so many times people are telling you – sometimes not maliciously, sometimes maliciously – you’re not good enough.” He recalls that his parents countered this by continually telling their kids how great they could be, which gave them the confidence they needed to succeed.

In the cramped one-bedroom apartment where they lived, Michelle’s parents sacrificed their own comfort and partitioned the living room into three rooms – two bedrooms and a study – so the kids could apply themselves to their schoolwork.

Life at home revolved around the childrens’ education and development. They were allowed only one hour of television per day, they were encouraged to excel at sports, music and other accomplishments. Michelle became obsessed with playing the piano, and her mother eventually had to restrict how many hours she could play each day. Craig was a gifted athlete, going on via Princeton University to become a basketball coach at Oregon State.

Michelle excelled at school. She was told by her parents that she should know how to think and question, and though she was always respectful, she was a precocious child, hungry for knowledge – a trait that was bolstered by an extended circle of family and friends who encourgaged Michelle’s intellectual growth by sitting up with her and discussing matters in depth.

In 1981, she was enrolled at Princeton University as part of a new affirmative action policy that aimed at encouraging more talented African-American students to pursue degree-level studies.

However, it was the early days for these changes that had been prompted by the Civil Rights Movement, and Michelle struggled with her identity. In her thesis on the effects of a Princeton University education on African Americans, she claimed that she always felt like a “visitor” who didn’t “really belong” at the university. Her honesty later came back to haunt her during her husband’s presidential campaign. Right-wing pundits seized their opportunity to frame Michelle as ungrateful and “bitter”.

There were, however, very good reasons that Michelle felt as she did. When, for example, her freshman roommate told her mother she was sharing a room with an African American, her mother stormed into the university’s offices and demanded her daughter be rehoused, explaining that she came from the South, where “we aren’t used to living with black people.” Her roommate term.

The affluent lifestyles of some of her white classmates shocked Michelle. She didn’t know any adults who drove BMWs at home, let alone students her own age. Not comfortable with the ostentatious displays of wealth and privilege that she saw everywhere on campus, Michelle dedicated her time to running the Third World Center at the university, eventually becoming its director.

Even after graduating from Princeton and successfully studying law at Harvard, Michelle was conflicted as to her identity as a black woman. She had noted in her Princeton degree thesis that black Princeton graduates often felt a lowered sense of identification with fellow black Americans, as their aspirations and hopes aligned themselves with predominantly white, middle-class values. After leaving Harvard she became a lawyer at Sidley and Austin in Chicago. Her talent was immediately spotted by her bosses, who saw her as someone destined to be at the top of her profession. This success perhaps filled an emotional need in her, since the strong work ethic that been instilled in her early on was paying substantial dividends in terms of professional and financial success.

However, things changed when she met a young summer intern by the name of Barack Obama, whom she was tasked to mentor. Young Barack was immediately impressed by Michelle, and he let her know it.

Initially, Michelle was unwilling to go on a date with Barack, but that opinion was changed when she attended an inspirational training course he gave in a church hall not far from where she was raised in Chicago.

In his speech, he addressed the unmarried mothers in the crowd directly. Many of these women were from some of the poorest parts of the city. The training was based on the concept of narrowing the gap between the world as it was and the world as it should be. As she watched Barack speaking to and listening to people whose circumstances mirrored her own chilldhood, she changed her personal and professional attitude. Not only did she see Barack in a different light, she saw her work in a different light as well. Spurning financial success, she decided to work in public service.

While she worked in different roles in the public sector, her relationship with Barack Obama flourished. Two very different people, they had very different ideas about marriage. He was quite happy to “hang out”, while she was very firm about wanting commitment. One day, while they were having dinner, she told him that he needed to make a commitment to their relationship. To her surprise, when the dessert turned up, there was a small box on the side of the plate. She opened it to find an engagement ring. When she saw it, Obama said to her: “That kind of shuts you up, doesn’t it?”

The couple married in 1992 and they had two children.

Just like her mother had been to her and her brother Craig, Michelle’s dedication to her family was strong. During Barack Obama’s 2008 campaign for president, the candidate and his wife argued frequently about the amount of time the campaign was taking and what that meant for their family. Nevertheless, politics is part of who she is. “Politics,” she says, “decides the future we want for our kids and our grandkids.”

A First Lady like Michelle Obama has never been seen before. She is straight-talking and happy to criticise her husband for “not picking up his socks” or failing to empty the litter tray, giving a human touch to a post that can seem alien and aloof to so many.

She has put her name to a popular anti-obesity campaign, Let’s Move, she encourages organic gardening, and she has fought bans on abortion, visited homeless shelters, supported military families, helped working women balance career and family, encouraged national service, promoted the arts and spoken out in support of LGBT rights.

She has had her controversial moments. Her criticisms of Princeton in her thesis, written when she was a young woman in her early 20s, was seized upon by the right-wing press during the election campaign. Her comment during the Presidential election campaign that “for the first time” she was “proud” of her country gave the pundits an open goal to shoot at, and shoot at her they did, painting her in broad strokes as a bitter and ungrateful first lady.

Other criticisms of her have been even further off the mark. As someone who is immaculately turned out, she has been compared to an “It” girl, one from a privileged social background by some portions of the media.

Her brilliant riposte to Stephen Colbert when his satiric alter-ego confronted her with this shows her ability to think on her feet.

“Everybody knows you and your husband are elitists,” Colbert said as she settled in to the interview. “Tell me about your elite upbringing on the South Side of Chicago. How many silver spoons in your mouth?”

“We had four spoons,” she deadpanned back. “And then my father got a raise at the plant, and we had five spoons.”

It was an answer at once insightful and hilarious. The idea that her father, who, crippled by MS late in life, continued to work even when he needed crutches to walk represented some kind of privileged background was, frankly, ridiculous.

Her upbringing may not have been one of privilege, but it was undoubtedly special. What her parents did provide her was something more precious than a society life. They helped instil in her a belief in herself, a stong work ethic and an unflagging moral purpose.

This is one of the reasons she has become an icon for so many people around the world. In many ways, she and Barack embody the American Dream. With a little talent and a lot of hard work, anyone, no matter what their background, can rise to the very top of society. She and Barack are beacons of hope for all of us.