Fighting To The Top

Home Fighting To The Top 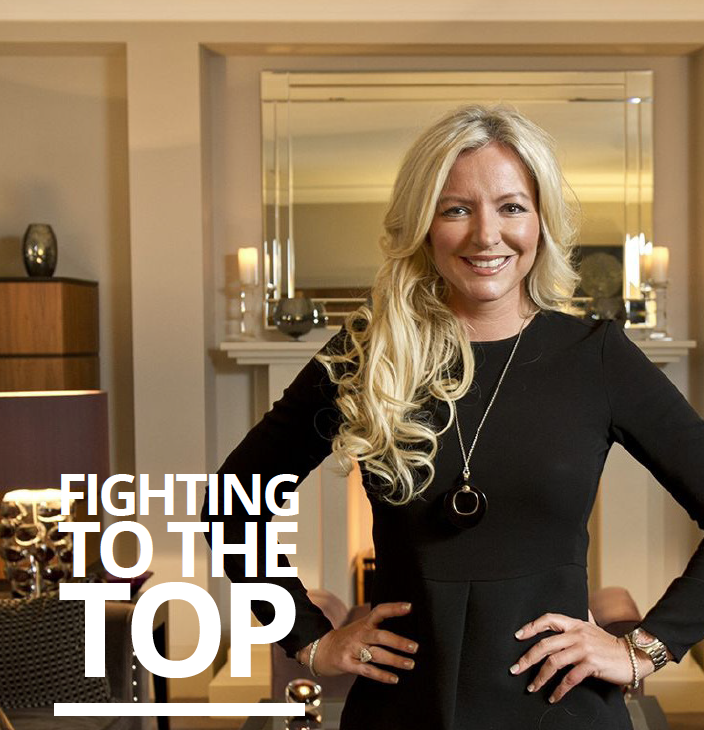 From working class single mum to self-made millionaire and member of the House of Lords, Michelle Mone tells Bernardo Moya her inspirational story

Michelle Mone was born in the deprived East End of Glasgow in 1971, where life was not easy and where many are trapped in poverty for their whole lives. That could easily have been Michelle’s story, as she admits that being dyslexic meant she “wasn’t that great at school”.

However, thanks to her unique talents and hard work, self-starter Michelle turned her future around. And she started young. After the tragic death of her younger brother and a her father’s became increasingly unwell, Michelle began her first business when she was just 10 years old.

“It was a paper round,” Michelle smiles. “By the time I was 11, I had 17 teenagers working for me. I went on to a fruit shop and a sweet shop. I was just so passionate about business. I always wanted to be an entrepreneur. I left school at 15, because my dad was confined to a wheelchair when he was 38 years old.”

Dreaming of eventually following in the footsteps of Richard Branson and Dame Anita Roddick, Michelle took to modelling to earn money. Though she was an attractive blonde with a pretty figure she says she was terrible at it, and when she became pregnant with her first child, she decided to change course and got a work as an admin girl at beer company Labbatt’s.

“I set myself a goal to get to the top of Labatt’s within four years,” she laughs. “I actually did it within three. I was heading up Scotland’s sales and marketing and I absolutely loved it. I had a plan and I worked exactly to that plan. I still have a plan every single day of what I want to do in life, both personally and in businesses.”

When Labatt’s was bought out by Whitbread, that’s when she was forced to really up her game. By then, she had a mortgage and two kids. For six weeks she was devastated – and then her ‘lightbulb’ moment” came..

“I went to dinner dance and I was wearing a very uncomfortable cleavage bra and I thought, why should women go through all this pain for a tiny bit of gain? I took the bra off in the toilet.”

Michelle set about inventing a better bra. When friends pointed out that had no experience or qualifications in design her reply was brilliantly to the point: “Well, “I’ve got a pair of boobs and I’ll work it out”.

After three and a half years of research and experimentation, and with mentoring and funding help from The Prince’s Trust she created Ultimo, the world’s first gel-filled bra. So, where did she get her confidence to go for it?

Think big she did. Rather than go to smaller boutiques, she first approached Selfridges buying department. Michelle remembers: “I just had a bag of bras and I said, I’m here to see the Buyer“. she says.

Despite not having an appointment and being told there was no chance, Michelle persevered. “I said, Well, you don’t understand, this is three and a half years of my life in this bag. I’m heavily pregnant with my third baby, I’m £480,000 in debt and this is the best cleavage bra ever. I need to see the Buyer now.”

Half an hour of persuasion later, the Selfridges Buyer did see her – and that’s when she got into one of the most prestigious department stores in the world.

At the Selfridges launch Michelle hired 12 actors to dress as plastic surgeons. “Everyone thought I was mad ’cause I only had £500 left, but it worked,” she smiles. “£54 million of PR overnight because the Press thought they were actual plastic surgeons.”

The canny PR didn’t stop there. She had sent the Ultimo bra out to wardrobe companies and stylists in Hollywood, and that’s how Julia Roberts came to wear the Ultimo Miracle Solutions Plunge Bra in the movie Erin Brockovich. When Roberts spoke about the bra in an interview about the film it brought global brand recognition you can’t put a price on.

Michelle created eight other brands, each with their own unique identity, so she could get the bra into the shops at all levels. It worked fabulously thanks to her meticulous brand creation, each of the eight had its own brand bible.

Of course, there were difficulties too. Not least nearly going bust after Michelle’s husband ignored concerns and signed a contract with distributors from Quebec in Canada who ran off 10 months of stock and credit worth £1.4 million. But she overcame it all, divorced her husband and took control of her business, building a massively successful brand that she eventually sold to free her to take on new challenges.

Always one to learn from experience, Michelle speaks philosophically of the relationship break up.

“I would say every divorce is very difficult, mine was. I was exceptionally bitter for probably two years. My advice is, there’s no point in being bitter. If anything like that happens in your life again just think that it happens for a reason and you’ve got to move on. Now I’m in my prime, now I’m extremely happy. I wouldn’t be doing the things I’m doing now if I was still married to him.”

Now, part of the mentoring Michelle offers others is on work-life balance: a tough lesson to learn. “It’s taken me 20 years to work it out,” she laughs “I wish I’d had a mentor back then. I put on 98 pounds in weight, I went from a size 10 to a size 22 and it was the sheer pressure of business, and working with my ex-husband.”

On the business side, her knowledge is priceless. Michelle says; “I can look at a product and launch it and make it very successful. My knowledge of design, technical manufacturing, shipping, retail, promotion, marketing, PR, all of that and many more things is what makes a good brand,” she says. In one year she brought out 12 different jewellery collections which she promoted through QVC. Each collection sold out in weeks.

Life has moved on a long way for the dyslexic girl with a bundle of energy and brains from Glasgow. In 2010 she was awarded an OBE in recognition of her services to British business. Then, in 2015, she was created as a life peer, as Baroness Mone of Mayfair in the City of Westminster. For her the title has a special meaning.

“I look back and I think of when I grew up in the East End of Glasgow with no bath or shower, in one bedroom I shared with my mum and dad. It was a real struggle, but my mum and dad worked so hard and they loved me to death. We used to always play Monopoly on the lounge floor and I always wanted to land on Mayfair, ’cause I knew it was successful and it was rich. And now Baroness of Mayfair it’s, yeah, sometimes I wake up and I think, really, did that really happen?”

“I really do feel as if now I’m in my absolute prime, I’m divorced now, I’ve got three amazing kids, I’m in the House of Lords, I’ve got an OBE. I feel I’m ready to take on the world and I’ve got loads of exciting things about to happen.”

Projects for the future include more work advising the government on business start-ups her maiden speech in the House of Lords. Meanwhile, her new business, Michelle Mone International advises people from the Middle East how to buy businesses in the UK, and vice versa. The future is fantastically bright.

So, does she have advice for women or men wishing to follow her stellar path?

“I would say it all comes down to confidence and you being able to walk into a room and saying, I am the best and my product, my service is the best,” she says. “If you doubt yourself for one split second, or your product, or your service then everyone around you will doubt you as well. If you work hard and you don’t ever over-promise and under-deliver for your customers and you have that positive mental attitude you will succeed. But it ain’t easy. Successful people have gone through a war to get to where they have and I’ve certainly gone through a lot of wars to get to where I am today.”

She smiles and adds, with a tone of pragmatism. “And again, I always tell myself, I don’t know it all. I’m still learning every day. That is absolutely vital to the mix.”

Watch Michelle in conversation with Bernado Moya at www.thebestyou.co