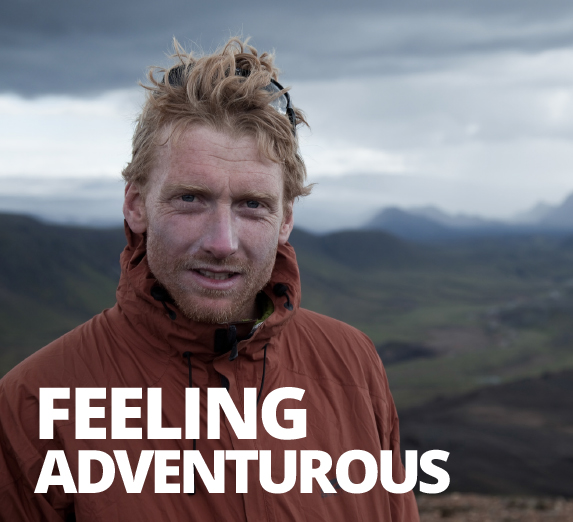 In 2001, Alastair Humphreys set out to cycle around the world. Today he wants each of us to find the big adventure inside of us, and achieve it!

Throughout history, adventurers have dared to be different, explored parts of the world that most of us will never see, stretching their levels of endurance and realising lifetime achievements.

In more recent times, we’ve been lucky enough to share many of these – with a growing number of television celebrity adventurers bringing their epic journeys to the screen, we live vicariously through their daring. But what if we challenge ourselves to live the big adventure ourselves?

One adventurer urging us to seize the day is Alastair Humphreys, whose own adventure started in 2001 when he set off from his Yorkshire home to cycle around the world, travelling 46,000 miles over four years.

For most people, this experience alone would be enough to dine out on for a lifetime, but in 2008, Humphreys embarked upon the Marathon des Sables, a 150-mile run across the Sahara Desert, completing the race even after her broke his foot.

Then again in 2009, he rowed across the English Channel with Major Phil Packer to raise £1m for Help for Heroes. Later that year, he walked across India, and in 2010 packrafted across Iceland.

Named Adventurer of the Year by National Geographic, he spent 2011 experiencing smaller achievements, coining the #microadventure ,which went viral on social media. The concept was to encourage people to get outside, out of their comfort zone and do something.

Firmly believing the first step is the biggest challenge to doing more than we believe we are capable of, his book Microadventures was a global phenomenon.

In 2012 he joined a team to row across the Atlantic Ocean, walked across the Empty Quarter desert – documented on film – and took an expedition across Greenland.

These experiences set him apart as a remarkable individual, yet Humphreys says he had to consciously become the person he is.

“As a kid, I was pretty normal and as a young adult I recall consciously remodelling myself. Children these days are massively wrapped in cotton wool, but I think it’s really important to scare and challenge yourself to do something different in life.”

Part of Humphreys’ journey has been connecting with other adventurers and creating an online community of microadventurers, who share their experiences on his website and via social media.

Although his own story began on the cusp of the digital age, the internet has allowed him to share his adventures with a global audience.

“I began my first big adventure as the internet began,” he says. “and I planned my journey the old-fashioned way with books, not via the web.

“Now that I’ve made adventuring my career, social media has been invaluable. It does sometimes strike me as incongruous that I’m an evangelist for adventures but need digital channels to share them, but I encourage people to share their adventures and then shut their phone off and live the moment right in front of them.”

So, having seen the world, where’s home for Humphreys?

“I feel very much that England is my base. I love being at home but I also love travelling and I get itchy feet, but I spend months at my desk, writing to pay for it.”

The challenges for the modern adventurer may have changed, but the pleasure of living in the moment and seizing the day remains as timeless as exploration itself. We just need to make a start. Grand Adventures by Alastair Humphreys is published by William Collins.

Find out more at alastairhumphreys.com