The Essex Boy Made Good: a Jamie Oliver profile

Home The Essex Boy Made Good: a Jamie Oliver profile 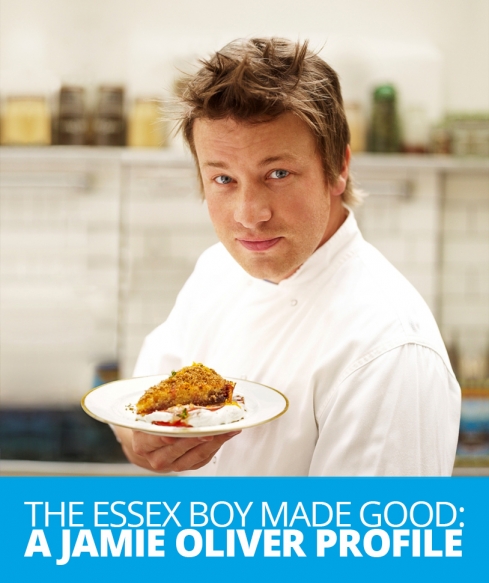 What are the ingredients that make up the tour de force that is Jamie Oliver? The Best You investigates.

In many ways, he’s the man who has it all: a celebrity chef who cooks for a world leaders, Oliver has a happy, solid marriage, four gourgeous children, and he is adored by his fans. Atop such success and happiness, the millions of dollars he earns and raises for worthy causes each year is merely a garnish.

He has an active social conscience rarely found in today’s celebrity culture; he has a passion to do what is right and ceaseless energy to achieve his goals. His combined infectious enthusiasm and disarming charm makes people stop, listen, and take inspiration from his words.

Born on 27 May 1975, Jamie grew up in Clavering, Essex. He is the son of Sally and Trevor Oliver, owners of The Cricketers Pub, which they moved into in 1976 hoping to revive the flagging establishment.

Many of Jamie’s most renowned traits come from those early years. His dad taught him the importance of deftly engaging with the restaurant’s customers. People who complained were won over by being offered alternative food – and by his dad Trevor’s winning charm.

Trevor’s attitude to food contrasts with the deservedly poor reputation of British cuisine in the 1970s. Jamie recalls one woman complaining about the freshness of the fish she had been served. After defusing the complaint with aplomb (the fish had been bought absolutely fresh that day) his words to Jamie perhaps helped shape his son’s later passion for fresh food:

“Son, we have to educate some of these people. They are just too used to the frozen stuff.”

Formal education for Jamie was not positive. A lover of practical jokes, he alleviated the boredom he felt in one class by getting classmates to move seats every time the teacher turned his back. One teacher’s words in describing the event reveal his attitude to his pupil:

“I would look back at the class and home in on one of the more helpful members of the class, and ask a question to move the lesson on, only find it was Jamie Oliver, or someone even dimmer, staring balefully back at me.”

Jamie is dyslexic, a matter of much mirth to his classmates who would mercilessly chant “special needs” when he put up his hand in class.

In typical fashion, too bighearted and popular to think it meant anything, Jamie laughed off their teasing.

Emotionally grounded himself, Jamie revelled in the closeness of the gypsy community to which two of his friends belonged. He was also shocked by their poverty. Though his own family was poor (his dad was so determined to make the food at The Cricketers excellent that he paid the chef more than he paid himself), their poverty moved him – and perhaps prompted him to make great food for ordinary people when he decided to treat them:

“These gypsies had never even tasted turkey and pickle before; they used to just about live on jam sandwiches. Imagine giving them smoked salmon. When I opened up the sarnie and squeezed the lemon on the smoked salmon they just went, ‘Wow!’ That look on their faces was my first feeling of ‘this is really good’ about food that I can remember. It was like showing a kid from 1800 what a VW Golf Convertible looks like.”

Jamie’s passion for food combines with an ethos of extraordinary hard work. His dad instilled in him from early on that you get from life what you put into it. He made the point by paying Jamie’s pocket money in return for working in the pub. Nowadays, Jamie is renowned for unstinting hard work and long hours – the lot of both the chef and the media sensation.

Jamie left school with only two GCSE qualifications. His own insight into why he did so badly is telling:

“Basically, I buggered about too much. The way my brain worked, I needed to see, touch and smell things. I enjoyed the practical side of learning, and I did all right at Art and Geology because they were very touchy-feely subjects, but Maths and English were a nightmare.”

Nevertheless, Jamie wanted to become a chef, and he promptly enrolled at Westminster College in 1992 to study catering. After two years he passed his exams with distinctions. Work that had previously caused him so much difficulty at school suddenly made sense when it had a context and a purpose.

From here, he learned his trade as a chef in France and London, before getting work in The River Cafe on the Thames.

Then in 1997 he was spotted by a BBC crew filming a documentary at The Riverside Cafe. They loved his friendly, unselfconscious attitude and asked him to contribute short sections to the show. It was a turning point. The day after the show aired, he received four offers from television companies looking for a fresh face for their cookery programmes.

Jamie agreed to work with the BBC to create his debut series The Naked Chef. At first, Jamie was horrified by the name, but after a while, he began to realise it was a great way to describe his idea for a cooking show that would be “stripped down to the basics”.

Part fly-on-the-wall documentary, part cookery show – even part lifestyle advert – The Naked Chef was filmed in his London apartment. It followed Jamie going about his life as a chef, driving around London on his scooter and cooking for friends and family at dinner parties, alongside his partner, soon to be wife, Jools, whom he met when he was 16.

The show was a sensation. Jamie’s appeal to girls was obvious with his easy manner and good looks, but boys also loved him. His likeable “yoof” persona, swish London pad, beautiful girlfriend, and smart friends made cooking not only acceptable but cool to young men who had never thought of lifting a fish slice before.

His appeal went far beyond youth. The Naked Chef also appealed to a far older demographic. It was a runaway success.

Whilst some sneered at his apparent ‘selling out’ to Sainsbury’s, Jamie Oliver’s next step was to show that he really did care – not only about food but also people.

The Channel 4 series Jamie’s Kitchen was a documentary that showed Jamie giving back to the community. It was inspired by Jamie’s friend, who worked with young people from disdvantaged backgrounds. He told Jamie that young people often found focus in cooking when they struggled elsewhere.

Jamie knew this feeling all too well, so he decided to offer young people from troubled backgrounds a helping hand by giving them work in the kitchen of his new, non-profit restaurant, Fifteen, based in Hoxton, East London.

The show tested Jamie. He not only struggled to inspire the 15 troubled kids who co-starred in the show, he also put his own money on the line. Included in the show were disagreements with his wife Jools about the project – something which caused real tension between them. Even though the project was largely philanthropic, Jamie nevertheless risked everything to keep Fifteen going.

Some of the wayward young people he trained didn’t recognise the opportunity they were being handed. Many failed to show up on some days, were demotivated, or just difficult to work with. Jamie’s frustration frequently bubbled over into four-letter frustration. It made for compelling viewing.

Jamie’s Kitchen was a massive success. Eight of the 15 trainees stayed with the show and qualified as chefs. Along the way, they cooked for the Prince of Wales, Tony Blair, and Irish PM Bertie Aherne.

The show established Fifteen as a must-visit restaurant in London, and Fifteens were set up in Amsterdam and Melbourne, also designed to help the disadvantaged.

By now Jamie had a taste for making a difference in people’s lives. His next project was his most ambitious yet. Jamie’s School Dinners recorded his passionate attempts to revive healthy cooked school dinners in schools. The minimum nutritional requirement for school dinners had been scrapped by Margaret Thatcher’s government in the 1980s, and the decline in food quality had reached a dangerous low point by the time Jamie entered the picture.

The show revealed his deep consuming passion not only for food, but for justice and what is right. His feelings of deep anger at seeing foods such as the notoriously fatty and salty “turkey twizzler” being served to growing children caused waves of outrage to spread across the country.

The show was so powerful it not only reintroduced healthy food to Kidbrooke School Greenwich, but changed Government policy.

By the end of the series, Jamie Oliver was spearheading a movement that saw healthy school dinners being rolled out across the entire country.

Watching Jamie organise school dinners or doing copious amounts of research into food and its effects on children in the day and running Fifteen by night was extraordinary viewing. The show won BAFTA awards, changed Britain’s schools, and silenced once and for all those critics who accused him of selling out.

Jamie has never stopped. He clearly cares deeply about people and food. As well as the usual celebrity chef fare, his TV shows include attempts to educate difficult children or taking on corporate America, whose hand lowers the quality of school meals in the USA.

There is something very real about Jamie Oliver and the way he connects with others. Viewers love him, he regards his staff at Fifteen as family, and, as for his family – wife Jools and children Poppy, Daisy, Petal and Buddy – they are absolutely the centre of his world.

He is an extraordinary figure who continues to live according to his passions and beliefs. Somehow, somewhere along the way, that dyslexic lad from Essex with a wicked sense of humour and an easy manner turned out all right.

“I profoundly believe that the power of food has a primal place in our homes that binds us to the best bits of life.”

Jamie Oliver At A Glance