Escaping the City: an interview with Rob Symington

Home Escaping the City: an interview with Rob Symington 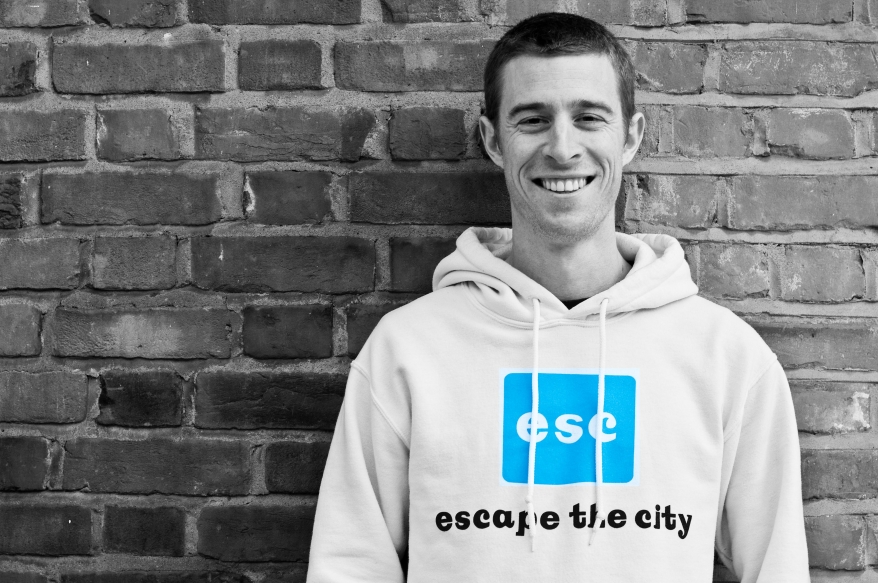 Like many other people, Rob Symington once dreamed of getting out of the rat race and the corporate grind. But, unlike others, he did something about it – he set up what he calls a “dating agency” that puts people who want to escape the city in touch with the opportunities they need to get the lives they’ve always wanted.

Like many humanities graduates, Rob gravitated towards the city after graduating with a degree in history. He took a job as a management consultant for Ernst and Young in London.

“The first year was excellent,” he recalls with a smile on his face, “but then things changed. Something about the corporate world wasn’t right for me in terms of the hierarchy, the politics and the bureaucracy. Somewhere towards my second year, I began to lose my enthusiasm for that environment, and began to think, ‘Well, if not this, then what?'”

It was then, as he sat in one of the “cubicle farms, as you see in The Wolf for Wall Street and other movies” that a face poked its head over the cubicle and whispered to him, “This is a bit rubbish, isn’t it?”

Rob remembers, “I immediately saw a kindred spirit. I thought, ‘This guy’s on my wavelength. The whisperer was Dom Jackman, and the pair spent their lunch breaks and pub evenings thinking about “what a viable career would look like outside the safety of that environment.”

After exploring various ill-conceived schemes, they realised that the transition to a non-corporate career was hard. Then the idea hit them.

“The frustration we were feeling was potentially the idea that might be worth pursuing. We were far from being the only people feeling frustrated with this environment. We looked at our peers, our colleagues, and our mates from Uni. Broadly speaking, people in their 20s climbing their way up the corporate pyramid, and we thought, ‘There’s a massive problem here.'”

Rob and Dom had realised a lot of people were wondering both why they were working in this environment and how they could get out of it without going broke. “So we thought in a kind of circular way if we can build something that helps other people ‘escape’ from the corporate world, then maybe we ourselves could escape. That idea hit us between the eyes like a blow, like we’d just been slapped, and we thought, ‘This is exciting,’ because we felt the problems so personally ourselves.”

A great business idea, but what next? Rather than setting up a business, they were inspired by Seth Godin’s book, Tribes, and they began to talk about their idea online.

“The reality of the transition was we sat down and we’d thought, ‘Well, this could be a business, but it also could just be a project. It’s an idea for a community, potentially.'”

The response was strong and heartfelt. The pair built up a large online community of like-minded people, all with the same desire to leave the rat race. This community grew and attracted new members to their blog, Escape The City – the same blog they run today.

“We got such an incredible reaction. We thought, ‘Actually, we’re on to something here. What would the next step look like? What would happen if we quit our jobs and invested some savings in a web site? Could we run with this thing?’”

The pair identified two sources of income. The first was events, education and courses for people wanting to transition; the second, to act as a conduit through which experienced ambitious people could connect with employers and opportunities. This meant they were essentially running a recruitment business with a high technical element, but Rob certainly didn’t see himself as a headhunter.

“We’re trying to match people with new employers related to what those people want to do and what those employers can offer. It’s kind of like dating for recruitment,” he laughs.

So far, they were hustling. They set up their website and realised there were no jobs on the jobs board, so initially they hunted for jobs on Google and put them up on their website manually. Then, one day, the Metropolitan Police called and asked if they could post some jobs on their site.

“The guy on the other end asked, ‘What’s your rate card?’ I put my hand over the received and said to Dom, ‘Mate, what’s our rate card?’ By the end of the day, we had a rate card and we’d made £500, and we thought, ‘Well, okay so this works maybe!”

Unconventionality seeming to be their byword, to expand the business further, Rob rejected the idea of taking his business to Venture Capitalists because it somehow felt wrong. Instead, they went after crowdfunding.

“We’re trying our best just to build a platform that intelligently matches people with their next moves based on what they’ve done and what they want to do. So we’ve got a hell of a lot ahead of us, but we’re in as good a place as we’ve ever been,” Rob says.

For Rob, it’s about providing a personal service for people whose levels of risk tolerance are very different. Forever transitional, like the hedge-funder who left the city to run a beach lodge in Mozambique, there are numerous people who are just looking to found or be a part of small, exciting businesses. Each solution fits the individual.

The idea works. With offices in New York, a website that’s attracting visitors from all over the world, and courses and events that really help people to change their lives, it’s a heady and rich mix, and something Rob is deeply committed to.

And this shows in the emotional investment of Rob and the people who attend Escape the City events. The speakers are usually entrepreneurs or people who know something about the career change process, be they psychologists, career coaches or adventurers. Everyone who attends the events has the unifying desire to do something different with his or her life and/or career.

“Those events are sometimes like Alcoholics Anonymous meetings. I can’t tell you the energy in the room. So during the questions, someone might put up his hand and say, ‘I resigned this morning’, and everyone else will cheer, and suddenly you see all these people in the room who have something in common.” Barriers fall, and people make connections. “We encourage some serendipity”, Rob adds, explaining that it’s a place where people can help each other move projects forward.

“The hairs on the back of my head stand up when I’m in that environment, and sometimes I’m the person trying to make the connections happen. Because you see that you’ve left your cold computer screen and you’re looking at people in the face, there might be a beer involved, which makes it even easier.”

Escape the City encourages entrepreneurialism – the attitude that isn’t taught in schools and that isn’t necessarily to be found in family businesses. With numerous people “living the dream” thanks to Rob’s initiative, it’s something that clearly works. It isn’t necessarily about getting out of civilization, though. It’s more about escaping the corporate life, as Rob himself attests with a grin:

“I currently live on a narrowboat up on the Regent’s Canal with my fiancée.” It’s not far in miles from the City of London, but it’s a world away in attitude.

Rob Symington At A Glance