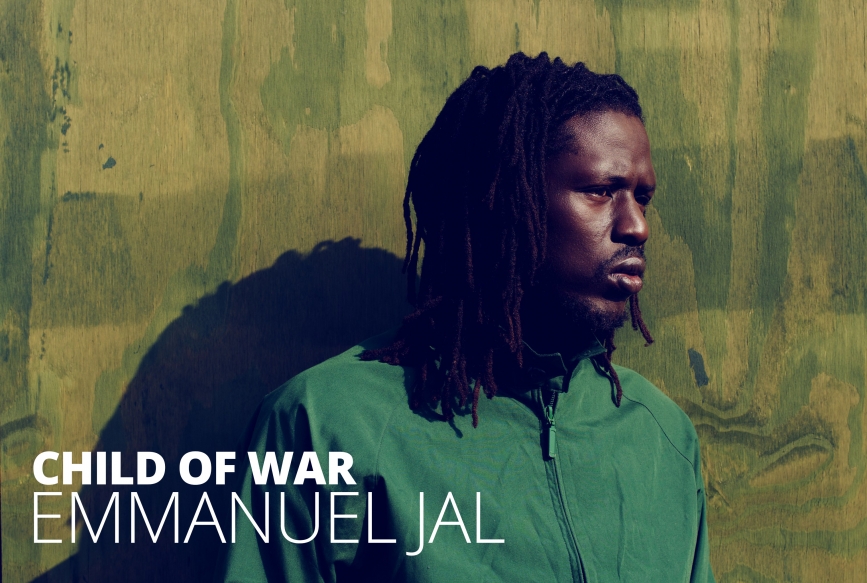 Bernardo Moya talks to Emmanuel Jal, whose terrifying story of fighting as a child in the Sudanese Civil War has given him a unique voice

“It took us three months; we thought it was gonna take us a month,” he remembers, his dark eyes looking levelly at me for a moment.

Many boys died of starvation. Cannibalism began. “I was tempted to eat my comrade,” Jal says. “It was the lowest point of everything I’ve experienced.”

The survivors finally made it to relative safety in a place called Waat. Only 16 of 400 boys survived. In Waat, the base of an SPLA commander who had separated himself from the rest of the SPLA, Jal meet Emma McCune, a British aid-worker. McCune smuggled him from South Sudan into Kenya and got him schooling.

“She traded my gun with a pen and there’s no bigger gift than that,” he says. He took school very seriously. “I wanted to know who made the bombs?  Who made the tanks?  Who made the biscuits? How did they make it? The bag of maize – how do they make it? And we’re told the people who go to school know how to do these things and I was really excited to go to school. I was so focused one time when I fell in love with a girl, you know… I couldn’t handle the feelings. I thought I was bewitched. It became like a problem because every time I slept, I was thinking about her and I was saying, ‘Look I did not come here to think about you, I came here to study’.”

Education transformed him. He learned to read and despite having been taught to hate Muslims and Arabs he worked out his own philosophy.  “I realised all mankind is the same. Human beings like to extend empathy to people of the same faith, the same colour as them, or the same belief or anything – so they can build an ideology to rob other people. As my knowledge increased, I came to understand those who know will always exploit those who do not know. That helped me to discover the truth.

Not long after he arrived in Kenya and started his studies, McCune died in a car crash, and though life became harder, Jal remained optimistic. He describes education as, “the biggest gift I’ve been given”. I use my story when I travel around the world for social and emotional learning. I go to schools, colleges, universities and I believe if we share our experiences for social and emotional learning, we’re able to put a spotlight in a dark place that makes evil perform less.”

Thanks to some of McCune’s friends Jal continued at college. In the slums of Nairobi, he also discovered music. It became a therapy that helped him “see heaven again.” He started to dance and find redemption in song. He wrote lyrics that helped him deal with his experiences. He began to have success. As his name grew, interest grew in his story. In 2008 a documentary, War Child, was released, following Jal’s return to his homeland. It is a collaboration with producer Clinton Roachie who helped him to tell his story through music and spoken word.

A War Child book was published, and Jal addressed the United Nations and many other organisations, all the while seeking to build understanding and awareness of the refugee’s plight.

Jal has continued an extraordinary path. In 2014, The Good Lie, a film telling the story of four Sudanese refugees who win a lottery and go to live in America was released. Starring Emmanuel Jal and Reese Witherspoon it received general acclaim.

Jal also founded a charity working to help families and individuals overcome the effects of war and poverty.

Jal’s tale is not all a happy story. Like so many others throughout the world, he is a refugee again, this time living in Canada. On his return, the government in Sudan threatened to kill him. “I was beaten and warned they still don’t like activists here,” he says. He was told what happens to activists: “We remove their eyes and we kill them.”

So, Jal continues his work. His fifth album, The Key, which featured two songs from The Good Lie, came out in September 2014 – spreading the word about the suffering and injustice in Africa.

The West must do its part, Jal says. “There’s ethnic cleansing and the world still calls a president legitimate. Sometimes you ask yourself, ‘What was the World War for when the United Nations came together? Was it only to protect white people or was it meant for everybody?’